With his resounding victory in the election of 1952, President Dwight D. Eisenhower was thrust to the forefront of the Cold War. He was successful in bringing about an armistice to end the Korean War, but the international and domestic fear of communism continuously expanded. During his presidency, many believed Eisenhower took a seemingly nonchalant attitude toward the Cold War. However, Eisenhower was more than active in containing communism and attempting to protect international freedom from communist subversion. The Eisenhower Doctrine, which called for aid to be appropriated to help assist nations facing outside aggression, addressed the growing crisis of the Cold War throughout the 1950s. 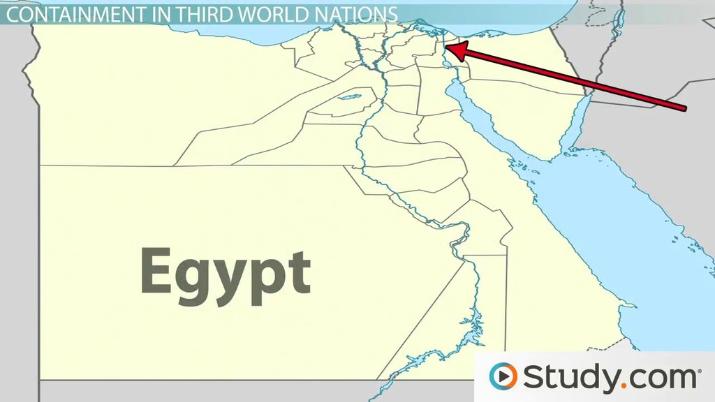 Coming up next: John F. Kennedy and the Cold War

Meaning of the New Look

The substance behind Eisenhower's strategy, also known as the New Look policy, was a potent mixture of pragmatism and toughness. Eisenhower wanted to reduce the rivalry between the United States and the Soviet Union by limiting the rhetoric and threats of each nation. He hoped that this rapprochement, or establishment of cordial relations, would cool tensions. Additionally, Eisenhower wanted to ensure that the American economy remained stable during a period of arms development. Therefore, he reduced ground forces and relied more on nuclear weaponry and air power. This would protect the economy, while giving the United States the power to retaliate with quick and devastating power against communist aggression.

Yet, even though he wanted to cool tensions through moderation, the New Look backed the policy of containment, which was a United States policy to prevent the spread of communism, coupled with liberation and negotiation. Eisenhower also supported the strategy of brinkmanship, which was developed by Secretary of State John Foster Dulles and called for escalating tensions so that the opponent, in this case the Soviet Union, falters. It's rather like a game of chicken, where two cars drive head on toward one another. The first one that swerves to avoid the collision is the loser. Brinkmanship is understood in the same context; the first nation to back down militarily is considered the loser.

Eisenhower and the Soviet Union

In 1953, the climate of the Cold War took a drastic, yet somewhat favorable, turn with the death of Soviet leader Joseph Stalin. In his place came a more moderate leader named Nikita Khrushchev. Khrushchev promoted the notion of peace between the United States and the Soviet Union and also came to the United States to promote this diplomatic accord.

Eisenhower was willing to work with Khrushchev as was evident by both leaders tempering their nuclear testing. Yet, a lingering suspicion of the Soviet Union and its communist base caused him to heighten security in different areas throughout the world. A prominent example of this suspicion was the U2 spy plane incident, which occurred when the Soviet Union shot down an American spy plane, causing a rift between the two nations in 1960. To promote security, Eisenhower expanded the North Atlantic Treaty Organization (NATO) and he created the Central Treaty Organization (CENTO) to bond several Middle Eastern countries together. Pro-democratic radio waves also hit the air as Radio Free Europe and Radio Liberation were launched as a propaganda effort against the Soviet Union.

President Harry Truman warned of communists expanding into developing third-world nations during his presidency. His fear was realized during the Eisenhower years as areas in Latin America, Asia and the Middle East became part of the Cold War. Eisenhower decided to use the Central Intelligence Agency (CIA) to combat suspected communist activity in several nations.

For example, the Suez Canal in Egypt, located in the northeast corner of Africa, became a hotspot of activity. This was because of the canal's importance in linking the Red Sea and the Mediterranean Sea. In 1954, Eisenhower supported Gamal Abdel Nasser's nationalization of the Suez Canal. However, after Nasser seemingly aligned with the Soviet Union in 1957, Eisenhower quickly established pro-democratic governments in Jordan and Lebanon. Both of these nations sit just to the east of Egypt, which makes them great locations to monitor Egypt and the Suez Canal.

Another prominent example can be linked to Latin American nations, more specifically Cuba and Guatemala. In Guatemala in 1954, Eisenhower eliminated President Jacobo Arbenz Guzman's suspected communist government. Eisenhower also helped begin an embargo on Cuba after Fidel Castro assumed power in 1959. Eisenhower and the CIA also had a hand in the removal of Mohammad Mossadegh in Iran, the rise of democracy-supporting Ramon Magsaysay in the Philippines and an infusion of financial aid to the Ngo Dinh Diem regime in South Vietnam. Moreover, Eisenhower created the Military Assistance Program, which funded anti-communist buildup in third-world nations.

Eisenhower's hard line against international communism was also felt domestically. In 1954, Eisenhower approved two pieces of legislation that had a profound effect on suspected communists. First was the Communist Control Act of 1954, which barred communist candidates from running in a national election. The second, an extension of the McCarron Act of 1950, required communist candidates to register with the federal government, as well as limited European immigration in order to avoid threats to national security.

The most significant piece of domestic Cold War legislation passed by Eisenhower was the National Defense Education Act of 1958. Eisenhower believed that students in the United States were drastically falling behind their communist counterparts due to the fact that the wrong skills were being taught. He encouraged a readjustment to the national curriculum, which called for a focus on academics such as math and science.

Upon leaving office in 1961, President Eisenhower gave a memorable farewell address. He encouraged the United States to continue embracing democracy while combating communist subversion. However, he admonished against the military-industrial complex, which is the relationship between the military and defense industry that had formed in the nation. Eisenhower believed that advancement could not be achieved through defense spending and politico-military relationships, but by rationalization and responsibility.

President Eisenhower entered office in 1953 and immediately issued the New Look policy, which combined moderation and toughness to combat communist expansion through diplomacy, containment and brinkmanship. Eisenhower's policy replaced ground forces with nuclear arms and CIA covert programs. The overriding goal was to combat communism without bankrupting the economy.

Eisenhower stood firm against international communist expansion. He supported brinkmanship, which called for escalating tensions so that the opponent falters. He engaged communism in Egypt, Guatemala and the Philippines. Domestically, he passed the Communist Control Act and the National Defense Education Act. Eisenhower will forever be remembered for his farewell address in which he warned against the rise of the military-industrial complex in the United States.

The Election of Ronald Reagan in 1980: A Reemergence of Economic & Political Conservatism

Hiroshima and Nagasaki: How the Atomic Bomb Changed Warfare During WWII

President Lyndon B. Johnson and the Great Society Program

New Trends in American Life in the 1980s

The Civil Rights Movement During the 1960s