A dyad in sociology is a group of two people who have a long-term relationship and is more fragile than a large group. Learn the definition of a dyad, an overview of the characteristics of a dyad, and how a dyad differs from other groups. Updated: 09/13/2021
Create an account

Definition of a Dyad

It is simply part of life that we form relationships and have interactions with other people. Once we do, we are considered to be in a group with them, whether it is a very small group, like just you and another person, or a group of a few people or several people. And the interesting thing is that each one of these groups will have characteristics of their own and affect you and those in the group with you in their own ways.

Sociologist Georg Simmel found the nature of group dynamics particularly interesting - especially when the dynamics changed based on the number of people in the group. So, he studied the smallest to the largest groups and wrote about the unique traits of each of them in his essay, 'Quantitative Aspects of the Group.' In this lesson, we will be talking about the smallest group Simmel identified: the dyad, or two person group.

Most of us are familiar with what it's like to be in a dyad, even if wey've never heard the word. As long as you have had a close relationship with one other person where you have interacted with them over a long period of time, you have been a part of a dyad. And when you hear about the characteristics Simmel used to describe the dyad, I am sure they will make sense to you as you think about your own relationships. 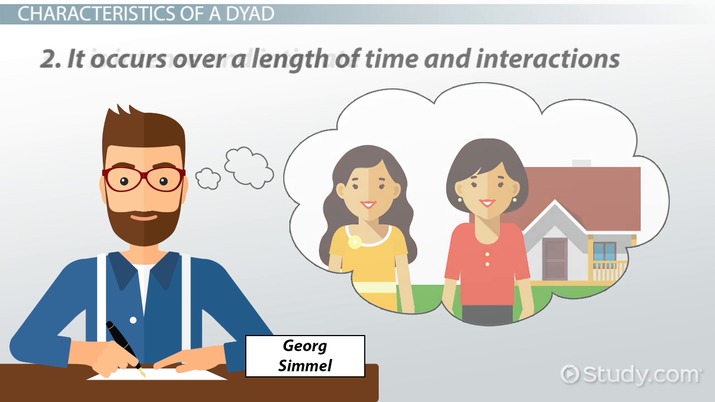 Coming up next: Endogamy: Definition & Overview

Characteristics of a Dyad

To begin with, a dyad is considered to be a primary group. Simmel categorized groups into either primary or secondary groups; primary ones meaning those that are small and close. More specifically, Simmel laid out these descriptions of a dyad:

How a Dyad Differs from Other Groups

A dyad is more fragile than a large group. If a one or two people leave a large group, the group itself still exists. It is also less stable than a triad, or three person group, because if there is a problem with two people in this group, then the third can play mediator, as long as the two do not join against the third.

A dyad is a long, close relationship in which there is emotional investment for both people involved. It is intense and intimate and it requires attention, effort and the willingness to work together. If anything goes wrong, one person is held responsible, rather than being able to blame other members of a larger group.

Validity and Reliability: How to Assess the Quality of a Research Study