Tiffany is a certified elementary school teacher. She has a B.A. in English, education certification and a master's degree in education from Central Michigan University.

Have you ever wondered how and why the earth rotates? This concept has caught the interest of many scientists over hundreds of years. In this lesson, you'll discover interesting facts about Earth's rotation.
Create an account

Do you enjoy watching basketball? Have you ever seen a basketball player do a trick by spinning the ball on his or her finger? The spinning ball rotates similar to the way the earth rotates.

Rotation is when something turns or spins around a point located at its center. Earth has an imaginary axis or a line, that starts at the top of the earth at the north pole and goes completely through Earth's center and ends at the south pole.

It's represented by the red line in this image. The Earth spins on this axis. It takes the earth twenty-four hours to do a complete spin on its axis. 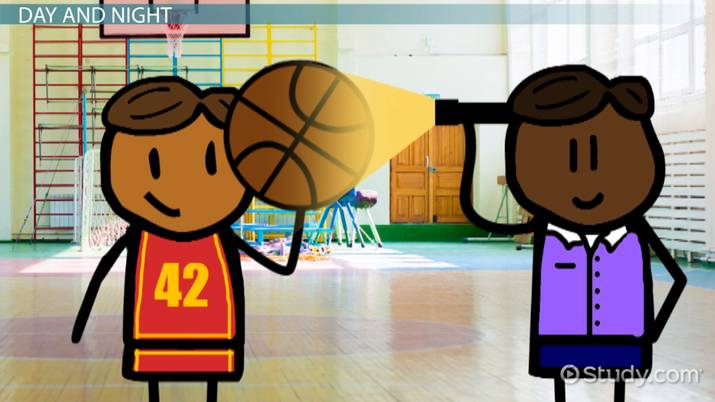 Coming up next: Seasonal Geography: Lesson for Kids

Have you ever been up early to watch the sun rise or seen it set in the evening? Sunrises are special because that is when your part of the earth is starting to face the sun, which turns darkness to light.

Look at the image of the sunset. How does this indicate rotation? Sunsets occur when your part of the Earth is rotating away from the sun, which is when light turns to darkness.

Other Facts About Earth's Rotation

Earth spins at about 1,000 miles per hour when measuring Earth's rotation at the equator. That's even faster than the speed of an airplane! Although it is moving at a rapid speed, we can't feel it since Earth is so large and moves at a steady pace. The only way that we would feel Earth move is if it sped up quickly or stopped all of a sudden, sort of like how you can tell when a roller coaster speeds up when it goes downhill or stops at the end of the ride.

Once again, rotation is when something turns or spins around a point located at its center. Earth has an imaginary axis, or line, that starts at the top of the earth at the north pole and goes completely through Earth's center and ends at the south pole. The earth does a complete spin on its axis every twenty-four hours, which causes day and night.

Facts About Saturn: Lesson for Kids

Revolution of the Earth: Speed & Effects

Movements of the Moon Lesson for Kids: Orbit & Rotation