John Steinbeck's novel 'East of Eden' is an American classic with an easy-going cadence despite its heavy storyline. The intricate plot and cast of characters can sometimes be confusing, but this lesson will lay things on the line so you can keep them straight. Read on for the plot summary and character clarification. Updated: 11/20/2019
Create an account

East of Eden takes place in California and uses a literary technique called allegory–the use of hidden meanings, usually moral or political–to shadow the biblical story of Cain and Abel. In the book of Genesis, Cain is jealous of the apparent favoritism their father shows his younger brother, Abel, and eventually kills him.

The novel, published in 1952, has a slow and intentional pace without tension, which was different from most popular fiction of the time. It received a cold reception from critics but was a bestseller immediately. A film was made based on the novel in 1955 starring the famous actor, James Dean.

What makes East of Eden so fantastic? Let's take a look. 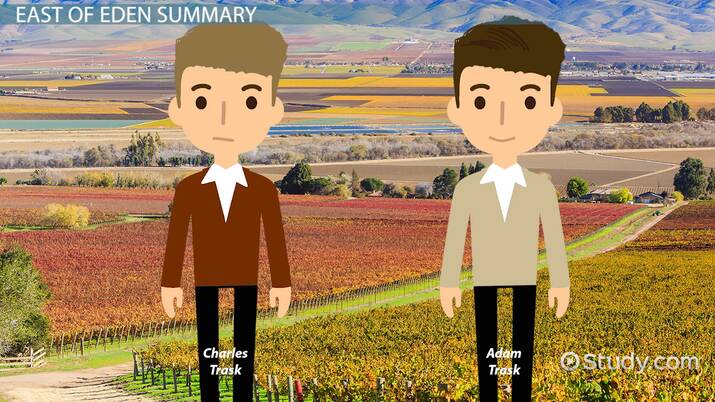 This book has a dense cast of characters that may be confusing at the start. Let's go ahead and take care of any confusion with a short character introduction you can refer back to if necessary.

Steinbeck starts out by telling several seemingly unrelated stories, then threads them together later in the novel. We'll introduce the characters as we go and separate each part of the synopsis with different names, indicating their place in the story.

The novel begins in the late 1800s in the Salinas Valley, an area in northern California, with a family named the Hamiltons. The father, Samuel, and his wife Liza are Irish immigrants who have raised their family, including nine children, with hard work and old-fashioned values.

As the Hamilton children grow and begin lives of their own, Steinbeck introduces Adam Trask, who buys an expensive land plot nearby. Here, the story flashes back to Adam's childhood in Connecticut, at some points digging as far back as Adam's father, who fought in the Civil War. Adam has a younger (but stronger and meaner) brother named Charles. Steinbeck contrasts these two brothers–Adam is peaceful and easygoing and Charles is dark and sinister. Adam and Charles' father dies and leaves them each a large sum of money, which is thought to be the result of some shady business.

Here, Cathy Ames, a girl from a nearby town, is introduced. Cathy is a bad apple–she does many horrible things in the novel, beginning by killing her parents and setting fire to their property. She becomes a prostitute, is beaten badly by her pimp, and gets dumped on Adam and Charles' doorstep. Innocent Adam falls in love with her, completely unaware of her past or true nature.

Charles is a little more skeptical and keeps his distance. However, Cathy seduces him and becomes pregnant soon after. The parentage of her twins, Aron and Caleb (also known as Cal), is never revealed.

In California, Cathy decides she wants a life without her family. She shoots Adam, leaves him and her newborn twins, moves to town where she murders the town brothel's owner, takes the brothel over, renames herself Kate, and blackmails her clients. Adam covers for her by saying he accidentally shot himself. He hires a cook, Lee, to help raise his boys and with help from him and the Hamiltons he keeps the farm together despite being depressed over the loss of his wife. It seems everyone else knows about what Cathy/Kate is up to except Adam.

It is here that Steinbeck first directly alludes to the story of Cain and Abel. Lee and Adam have many discussions about the true meaning of the story. Lee, a Cantonese immigrant, believes the Hebrew word 'timshel' means 'thou mayest'; to Lee this means humans are neither good nor evil in their wants or desires, just flawed beings, given the power to choose their own destinies. Pretty deep, right?

Charles, Adam's brother in Connecticut, dies and leaves his part of the fortune to Cathy. Adam figures out where she is and goes to the brothel to give her the money. Despite his kindness, she is hateful and cruel, which helps Adam see her true nature (FINALLY!). Meanwhile, Aron and Cal are growing up and meet a nice girl, Abra, from a wealthy local family. She and Aron fall in love.

Samuel Hamilton dies, inspiring Adam to start a business that eventually fails. Aron goes to college to become a priest, and Caleb begins a shady deal selling local crops overseas which makes him a lot of money. Caleb, who has always felt darker and meaner than his brother Aron, struggles with his nature. He discovers the truth about his mother and blames his dark nature on her. Lee (remember him, the cook and family friend?) tells him the story of Cain and Abel to help him understand the fault in his thinking.

Adam misses his son Aron, who is away at college, and thinks Cal isn't as smart or outgoing, feeding further into the Cain and Abel allegory. Cal feels this and decides to give his father some of the money from his business dealings at their Thanksgiving meal when Aron will be home. Adam dotes on Aron and when Cal tries to give his father the money it backfires. Adam believes Cal's business is immoral and instead of being happy and proud, he is angry and disappointed.

In response to his jealousy, Caleb tells Aron the truth about their mother, taking him to the brothel as proof. Aron screams, flees, and joins the army in despair. Cathy is so overwhelmed by seeing her son run away in fear and disappointment she overdoses and dies. She leaves all her money, a fortune gathered over her life, to Aron.

Adam falls into a deep depression when Aron leaves for the army. Cal continues his talks with Lee and begins to accept that he isn't evil. Soon he begins a relationship with Abra - she fell out of love with Aron when he left for the army.

The family is notified that Aron dies in World War I, which causes Adam to have a stroke. Lee tells Adam all about how Cal has felt slighted and disfavored his whole life, and convinces him to reconcile with his son before his death. Adam, with his dying breath, raises his hand for the blessing and says 'timshel'.

Let's take a couple of moments to review what we've learned!

East of Eden is an intricate story that parallels the biblical tale of Cain and Abel through the use of allegory, which is the use of hidden meanings, usually moral or political. Steinbeck specifically uses the allegory of one son being favored by the father, inciting murderous jealousy, as well as the ideas of human nature and destiny.

We also covered the main cast of characters in the book:

East of Eden diverges from the allegory with a different take, using the word timshel, meaning thou mayest, to guide readers towards the conclusion that humans are allowed to choose their own destiny. Steinbeck takes us on a journey that examines good and evil in the lives of his characters as they struggle to understand and accept that they ultimately have free will to choose how they live life.

Summary of Giant by Edna Ferber

For Whom the Bell Tolls by Hemingway: Summary and Analysis

Point of View in Death of a Salesman

Morality in The Adventures of Huckleberry Finn

Why Was The Grapes of Wrath Banned? - Censorship & Controversy