Francesca M. Marinaro has a PhD in English from the University of Florida and has been teaching English composition and Literature since 2007.

William Butler Yeats was a renowned Irish writer and poet, who is regarded as one of the predominant leaders in 20th century literature. Explore a summary and analysis of Yeats' poem, ''Easter, 1916.'' Review the poem's background, themes, metaphors, and symbolism to understand Yeats' message. Updated: 10/11/2021
Create an account

'Easter, 1916' is a poem by Irish writer William Butler Yeats, commemorating the Easter Rising in Dublin on Easter Monday, April 24, 1916. Then under British rule, Ireland had been promised independence from Britain once World War I had ended, but the Irish people felt resentment at having to provide the English with men and supplies during the war. During the rebellion, leaders of a political party called the Sinn Feiners (meaning 'We Ourselves' in Gaelic), who favored Irish independence, occupied key buildings in Dublin. After six days, the rebels surrendered to British forces, and sixteen of the Sinn Fein were executed.

Yeats had known a number of the rebellion's leaders, and he used the poem both to pay tribute to their sacrifice and to work through his reaction to the uprising. In Stanza I, Yeats recalls Dublin before the rebellion, remembering encounters with clerks and shopkeepers - a humdrum existence that contrasts sharply with the mood of rebellion that triggered the Easter Rising.

Stanza II refers specifically to the rebellion leaders whom Yeats knew. He recalls them as they were before political rebellion hardened their hearts, doers of charity like the Countess Markievicz, and teachers and poets like Patrick Pearse and Thomas MacDonagh. The countess was imprisoned following the uprising, and Pearse and MacDonagh were executed. Yeats also refers to John MacBride, a romantic rival who married Yeats' love, Maud Gonne. Despite this, Yeats feels compelled to mention MacBride and acknowledge his sacrifice.

In Stanza III, Yeats commemorates the rebels for their strength in sacrificing themselves: a strength, which he compares to stone throughout the poem. Yet he wonders whether such sacrifice was necessary since England had, after all, promised Ireland their independence. He ultimately concludes, however, in the fourth and final stanza, that it is the duty of those who remain to remember the Sinn Feiners' sacrifice and honor them for fighting for their country and their political convictions. However needless the violence, their sacrifice forever changed the state of the nation. 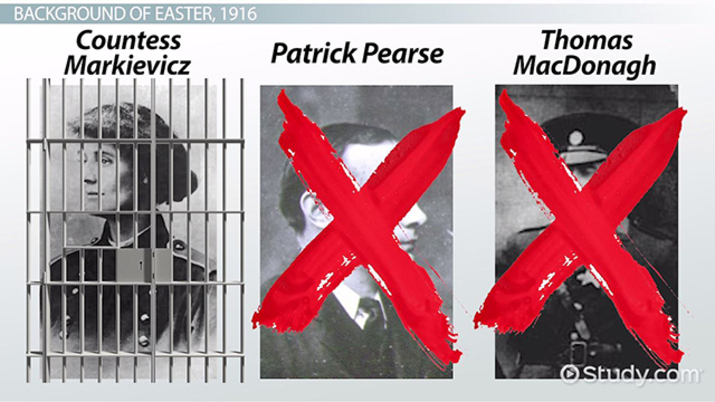 Try it now
Back
Coming up next: Edward Thomas: Biography & Poems

As an Irishman, Yeats supported Irish independence, though he disliked violence. The poem reflects his struggle to come to terms with his conflicting emotions. The repeated line 'A terrible beauty is born' powerfully captures Yeats' internal conflict - his admiration at the love the rebels felt for their country and his sadness over the loss of life that resulted.

The tone of the poem shifts from casual indifference, to confusion and sadness, to ultimate acceptance and sympathy. Stanza I represents a mundane picture of Dublin:

The normal, day-to-day drudgery of life presents a stark contrast with the rest of the poem, the shift in tone signaled by the final lines of the stanza:

All changed, changed utterly:
A terrible beauty is born.

Stanzas II and III convey a tone of sadness at the loss of Yeats' friends and acquaintances and confusion over whether or not he sympathizes with their rebellious actions. Lines like:

That woman's days were spent
In ignorant good-will, (referring to Countess Markievicz ) and

He might have won fame in the end,
So sensitive his nature seemed (referring to MacDonagh)

poignantly capture what Yeats views as a needless loss of life and sorrow over what these people might have achieved had they lived longer. On the one hand, Yeats admires their steadfast commitment to their purpose of pursuing Ireland's independence; on the other, he questions the extent to which passion, even a passion for what one believes to be right, can misguide and lead to tragedy:

Was it needless death after all?
For England may keep faith
For all that is done and said…
And what if excess of love
Bewildered them till they died?

In Stanza IV, Yeats mentions the names of several of the executed Sinn Feiners: MacDonagh, Pearse, MacBride, and James Connolly. He resigns himself to the loss, and with mingled sympathy and admiration, he calls the Irish people to commemorate them, to 'murmur name upon name.'

The theme of change appears throughout the poem in metaphors of nature, life and death, and the passage of time. The change reflects both the changing state of Ireland as a nation seeking independence and the mixed feelings of those like Yeats between loyalty to Ireland and loyalty to Britain. Yeats uses metaphors of the seasons, water, and stone to represent the strength and determination of the rebels in the face of turmoil and uncertainty:

Hearts with one purpose alone
Through summer and winter seem
Enchanted to a stone…
.
.
.
A shadow of cloud on the stream
changes Minute by minute
.
.
.
The long-legged moor-hens dive,
And hens to moor-cocks call;
Minute to minute they live;
The stone's in the midst of all.

Yeats' reflection in the first and last stanzas that all is 'changed, changed utterly' frames the poem, serving as a reminder that change is an inevitable part of the cycle of life - whether life of an individual, a nation, or the world.

This overarching theme of change resonates strongly if we consider the poem set against not just the backdrop of the Easter Rising, but of the events of World War I and the growth, development and freedom that often results from war, even through destruction. The 'terrible beauty' also reminds us that the Easter Rising coincided with the Christian celebration of Easter. With the poem's title, Yeats connects the sacrifice of the rebels for their country to the sacrifice of Jesus on the cross, an act that Christians believe opened the gates of Heaven and offered freedom from sin. Viewed within this context, the poem ultimately challenges us to reflect on the idea that from death can come life and that an end can signal a new beginning.

'Easter, 1916' is a poem by Irish writer William Butler Yeats, commemorating the Easter Rising in Dublin on Easter Monday, April 24, 1916. Several of his friends were part of a political party called the Sinn Feiners, and were either executed or imprisoned. Throughout the poem, Yeats explores his feelings about the uprising. His tone shifts from casual indifference, to confusion and sadness, to ultimate acceptance and sympathy. The theme of change is seen through several metaphors, like nature, life, and death. Additionally, the poem connects the sacrifice of the rebels with that of Jesus in the Christian religion, showing that from death can come a new beginning.

Following the Easter Rising in Dublin on April 24, 1916, Irish writer William Butler Yeats composed the poem 'Easter, 1916' in commemoration for the leaders of the uprising, who were acquaintances of his.