In philosophy, metaphysics considers reality and ideas about identity, cause, and related concepts. Review Eastern concepts of monism, Brahman, and views on morality to understand the difference between Eastern and Western perspectives on metaphysics. Updated: 11/03/2021
Create an account

My husband's best friend lives in China. Although he is an American, he has spent so many years in Asia that it feels more like home to him than does U.S. soil. When he does come here, he often remarks how different the American thought process is from that of the Eastern world. Several times a visit, he usually mentions how the West seems to value independence and freedom, while the East honors being part of a bigger whole. Rather interestingly, a philosopher would probably tell us this difference is directly linked to the metaphysics of the East versus the metaphysics of the West. Quite fittingly, this is the topic of today's lesson.

However, before we jump into the differences between the East and the West, we should probably define metaphysics. Keeping it simple, metaphysics is the part of philosophy that deals with concepts like being, substance, cause and identity. To really oversimplify, we could say it's the study of how things came to be and what caused them. It answers questions like 'What causes change?', or 'What sort of forces act beyond the world we see?' 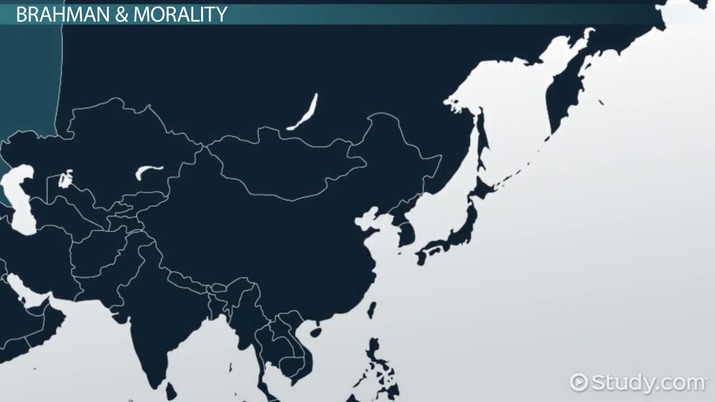 Coming up next: Gottfried Leibniz's Principle of Sufficient Reason

When discussing metaphysics in the Western world, many philosophers link it to dualism. Trying to keep things simple, dualism is the concept that reality or existence is divided into two parts. For instance, in most Western religions, people think the body is separate from the soul. When someone dies, the body remains in the ground while their soul does not. Applying this to the living, dualism sees you as separate from me. Keeping this in mind, let's use this information to better understand Eastern metaphysics.

Almost the complete opposite of Western dualism, is the East's monism. Again working to keep things simple, we'll define monism as the theory which denies any distinction between the physical world and the unseen world. Putting it even simpler, monism holds that everything is one.

To nail this down, let's take a look at the Eastern concept of Brahman. According to Eastern philosophy, and especially Hinduism, Brahman is the great unchanging reality that makes up everything. Although a very nebulous concept, the East sees Brahman as the highest reality of which we are all a part. Again, everything is one.

Keeping this in mind, Eastern metaphysics doesn't dabble with the question, 'How can we reach God? Instead, they believe that everything is part of a greater whole, a cosmic energy of sorts that governs all. Rather than using scientific knowledge and reason to understand this energy, Eastern metaphysics emphasizes behavior and morality. After all, if we're all part of one big whole, we better treat that one big whole rather nicely.

An excellent example of this emphasis on morality is the Dhammapada, a collection of sayings attributed to Buddha. In these works, Buddha sets forth principles on how his followers should live. For example, one translation reads, 'As a bee gathers the nectar of a flower and flies away without destroying its beauty or fragrance, so let the sage wander in this life.' In other words, a wise man will not cause problems or destruction. He will live at peace with all.

Metaphysics is the branch of philosophy that deals with concepts like being, substance, cause and identity. It seeks to answers questions like 'What sort of forces exist beyond the world we see?' Traditional Western metaphysics has centered on dualism, the theory that reality or existence is divided into two parts.

Eastern metaphysics is linked to monism. Monism denies any distinction between the physical world and the unseen world. Instead, everything is one. An excellent example of monism is the Eastern concept of Brahman. Being linked to Hinduism, Brahman is the great unchanging reality that makes up everything. It is the highest reality of which we're all a part. We are not separate from the unseen world; we are a part of it.

With this monistic belief in mind, Eastern metaphysics does not seek to prove this reality with science; instead, it focuses on living a moral life. An excellent example of this is the Dhammapada, a collection of sayings attributed to Buddha. In these works, Buddha compels his followers to live at peace with the great energy that makes everyone one.