A Circulatory System Without a Heart

Echinoderms are one of the true Frankenstein's of the animal world. If it wasn't strange enough that the members of phylum Echinodermata are able to have a nervous system without a brain and that their mouth and anus are sometimes the same body opening, it turns out that they are also able to have a circulatory system without a true heart. While it may be hard to believe that a mobile animal is able to move and function without a heart pumping blood throughout its body, that truly is the case with echinoderms.

It is also worth noting that while it is common to think of blood when you think of the circulatory system, not all animals have blood. Instead they directly exchange their nutrients and gases with the outside world through their body surfaces. Being blood-less is very common in soft bodied invertebrates like coral and jellyfish. 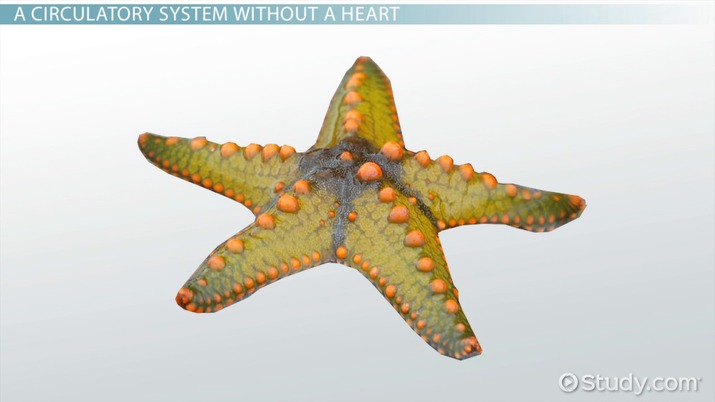 Try it now
Back
Coming up next: Echinodermata Digestive System

A Circulatory System of Sorts

Echinoderms do not have a true circulatory system like the ones found in humans or other mammals. Instead, they have a system of fluid-filled canals throughout their bodies that perform many of the functions that our circulatory systems do. These canals, referred to as an haemal system, is how they get the bad gases out of their bodies and the good gases in and help to transport blood and body fluids around the body cavity.

Unlike humans who have a closed circulatory system where their blood is closed off to the outside, echinoderms have an open circulatory system. In this open system, the animal's blood and the gases it contains are exposed to the outside world through tiny fibers, called cilia, in their arms (and down the sides of their bodies in the urchins and sand dollars).

The cilia's job is very similar to the job of leaves on a tree. Their goal is to release bad gases, like carbon dioxide, and take in good gases, like oxygen, from the water. The tube feet can also help with this process in the same way by acting as another surface for exchanging nutrients and gases with the outside world. It is also worth noting that unlike humans, whose blood is a characteristic red color because of the presence of hemoglobin, echinoderm blood is nearly colorless because it does not contain any respiratory pigments.

Members of the phylum Echinodermata, are a group of marine invertebrates that lack a true heart or a true circulatory system. A circulatory system is for the movement of nutrients and gases through an animal's body and does not necessarily require a heart. Instead of a circulatory system like the one found in humans and most mammals, echinoderms have a haemal system for gas and nutrient motion and exchange.

Their haemal system is an open system, meaning their blood is in direct contact with the outside world through fibers known as cilia which help to promote gas exchange. Their tube feet are also able to help, too. Their blood is also different than that of humans in that it contains no hemoglobin to make it red; instead, it is virtually colorless due to the lack of any respiratory pigments.