Echinodermata includes five distinct classes of invertebrate ocean-dwellers characterized by having nervous systems despite the lack of a brain. Learn about the sensory abilities of echinoderms and how their nervous system operates. Updated: 12/01/2021
Create an account

You probably have a good head on your shoulders. The starfish at the zoo? Not so much. Unlike most animals, which have an obvious head, and thus an equally obvious location for a brain, members of the phylum Echinodermata are lacking on both accounts. If you've ever tried to determine where a starfish's head is, then you understand the problem. Their characteristic pentaradial symmetry (five equal body parts) means that there isn't an obvious head end to their bodies.

Echinodermata contains five different classes of marine invertebrates: star fish, brittle stars, echinoids (sea urchins and sand dollars), sea lilies, and sea cucumbers. And, like the starfish, none have obvious heads. And as we will soon see, none have brains either. 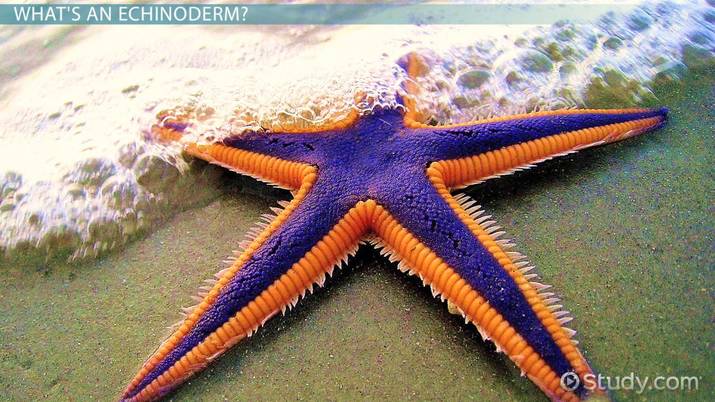 Coming up next: Examples of Symmetry in Phylum Platyhelminthes

A Nervous System Without a Brain?

If an organism has an organized set of nerve cells and fibers that are sophisticated enough to meet its needs for daily function, then it has a nervous system. And that is the case with echinoderms.

Instead of a brain, echinoderms have a ring of nerves located around their mouth area that governs their nervous responses. This ring coordinates their motion, their eating, basically anything that requires nerve control. A network of radial nerves surround the central ring, and functions in coordination with their water vascular system to help with motion and righting, their ability to get themselves upright again after tipping over.

Extending further outward from the central ring and radial nerves, you'll find sensory cells located along the arms and body surface that collect important information about the animal's environment. Kind of like when you blindly reach your arms out in a dark room, except these cells are even more talented. They are responsible for detecting temperature, smell, and making and interpreting contact with other objects. Though they lack true eyes (some starfish species have primitive eyespots), their sensory cells are able to detect changes in light conditions.

The phylum Echinodermata contains five different classes of marine invertebrates: starfish, brittle stars, echinoids (sea urchins and sand dollars), sea lilies and sea cucumbers. While they possess a nervous system, they lack a brain and many other common sensory organs, like eyes.

What they lack in brains they make up for in a complex network of nerves. The basis of their nervous system is a ring of nerves located around their mouth area, which extends outward into a network of radial nerves, and further outward into sensory cells located all over their bodies. It is these sensory cells that are responsible for their ability to find food, sense temperature differences, perceive changes in light conditions, and respond to external stimuli, like touch. While not as sophisticated as mammals and other vertebrates, echinoderms have a more than adequate nervous system to meet their needs.