Taormina has taught advanced high school biology, is a science museum educator, and has a Master's degree in museum paleontology.

In echinoderms, respiration takes place through their water vascular system, in which gills and tube feet are used in gas exchange. Explore the structure and function of Echinodermata respiratory system, and discover respiration of common echinoderms. Updated: 12/13/2021
Create an account

How Does A Starfish Breathe?

When you picture a starfish, crawling slowly across the ocean floor, it may not occur to you that these little animals breathe. Because they don't have a respiratory system like yours or mine. There are no lungs, there's no windpipe, and there's certainly no chest rising and falling with the flow of breath. Animals in the Phylum Echinodermata, the echinoderms, include starfish (or sea stars), brittle stars, sea urchins, sand dollars, sea cucumbers, and sea lilies. They are an ancient group with strange, five-pointed bodies and a kinship with our own ancestors. They are not-too-distant cousins of ours. Let's take a look at the structure and function of the respiratory system in Phylum Echinodermata, and figure out how these fascinating animals exchange gases with their environment. 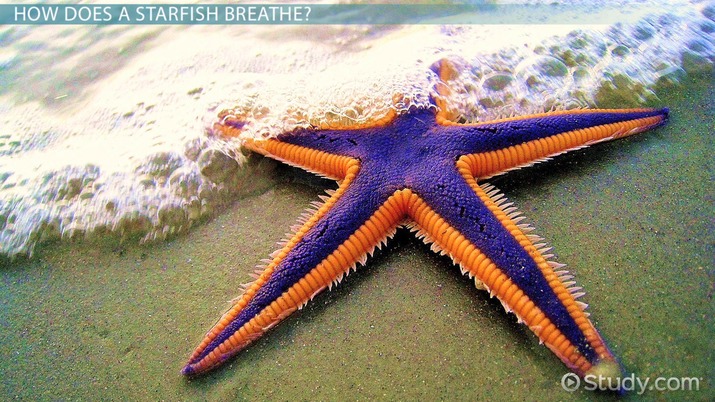 Try it now
Back
Coming up next: Annelid Reproduction: Facts & Example

The structure of the echinoderm respiratory system is fairly simple, across the group, though each class of animals within the phylum has its own specific respiratory adaptations. In general, echinoderms typically respire by simple diffusion, using gills or specialized projections, like tube feet or pockets, to circulate water and oxygen through their bodies. Many echinoderms also use a simple hemal system, a series of pockets and tubes that serves almost like a net of veins and arteries. Now let's examine the specialized systems of different types of echinoderms.

Sea stars have simple gills called dermal branchiae, really just tubular projections in the skin, which allow gas exchange to occur by simple diffusion. The internal, water-based fluid of the sea star, or starfish, circulates through the hollow body core. This space is known as the coelom, from the Greek word for 'hollow'. As water flows through the coelom, it circulates through these tubular skin gills, allowing oxygen to be taken in and carbon dioxide waste to be expelled directly from the tissues.

Brittle stars, relatives of sea stars, exchange gases in the base of each arm, at special pockets known as bursae. The bursae pockets are lined with tiny waving cilia, projections that help circulate water for gas exchange.

Sea urchins and sand dollars have a small set of gills in the tissues around the mouth, known as peristomial gills. These gills function in much the same way as the dermal branchiae in sea stars.