The ecological importance of bacteria centers on the microorganisms serving as both producers and decomposers. Explore the role of bacteria in the ecosystem, the role of symbiotic bacteria, and the danger of pathogenic bacteria. Updated: 12/14/2021
Create an account

Although macroscopically, ecosystems on Earth appear to be composed of plants and animals, there are some key players that exist beyond what we can see. Bacteria are tiny, single-celled microbes that help all life exist. They have a very simple structure with no nucleus, a structure that protects the DNA in more complex cells. Bacteria range from helpful organisms that break down dead material and provide food for ecosystems to pathogenic bacteria that can cause disease. Today we'll look at the main roles of bacteria in our environment. 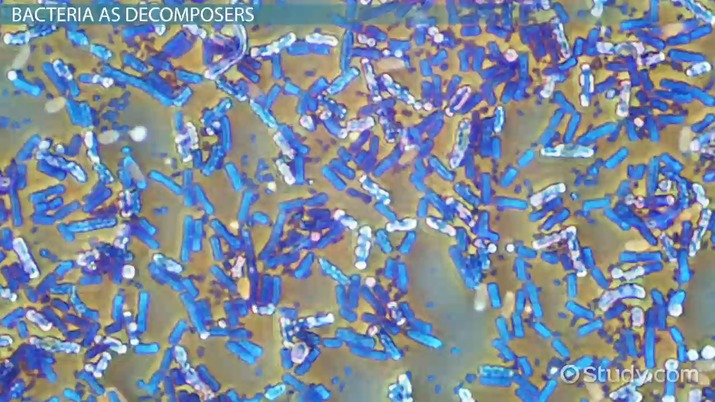 Coming up next: What Is a Colony-Forming Unit? - Definition & Purpose

Producers are organisms that make their own food, which we usually think of as green plants. The truth is, bacteria are the producers in many ecosystems as well. Producers make food for the entire ecosystem, supporting animals that eat plants, or herbivores, which in turn support carnivores. Without producers, there would be no life on Earth. There are bacteria that do photosynthesis using carbon dioxide and sunlight, like plants, and bacteria that do chemosynthesis, where they use chemicals to make food.

Photosynthetic bacteria use light energy from the sun to make food, like plants do. However, bacteria are much simpler than plants. They are only single-celled and have no compartments inside their cells to do specific jobs like plants do. Plants use a compound called chlorophyll to make food from sunlight. Purple photosynthetic bacteria have a related compound called bacteriochlorophyll that allows them to absorb light. Other bacteria like cyanobacteria use a similar compound to chlorophyll called phycocyanin to produce food.

Decomposers are any organisms that break down dead material and return it to the soil. Think of decomposers as the recyclers of the ecosystem. They take things that would otherwise be trash - dead organisms - and recycle the nutrients in them. Plants can then use these nutrients to grow, and animals eat the plants. The nutrients are returned to the living things. Bacillus subtilis is a common soil bacteria also found in our digestive tract and an example of a decomposer.

Another bacteria, actinobacteria, break down a nutrient-rich compound called humate. Humate is used by farmers as a fertilizer that can be broken down by soil bacteria to other compounds needed for plant growth.

Although we usually think of bacteria as a bad thing, many bacteria live in symbiosis, or a mutually beneficial relationship. In the flooded rice fields of Asia, cyanobacteria live symbiotically with plants like ferns and hornworts. The bacteria do a process called nitrogen fixation, which provides nitrogen for the plants, which they need to grow. Another example is between photosynthetic bacteria and fungi. The photosynthetic bacteria provide food for the fungi, and the fungi provide protection for the bacteria.

Symbiotic relationships aren't just for plants though. Humans and other animals contain thousands of bacteria, like E.coli in our gut. The bacteria break down food that we cannot, like fiber from plants. The bacteria get food, and we get our food broken down for a healthy digestive system. Animals that are herbivores, like rabbits and cows, are especially dependent on their symbiotic bacteria.

Although the bacteria we've talked about so far are helpful to other organisms, there are also some bad guys in the mix. Pathogenic bacteria are bacteria that have the potential to cause disease. Bacteria can infect both plants and animals. Some of the common sicknesses we experience, like food poisoning and strep throat are caused by bacteria. Methicillin-resistant Staphylococcus aureus, or MRSA, is an especially dangerous infection. This bacteria can't be killed by many of the normal antibiotics we have, making infection hard to cure. The infections typically occur in hospitals where lots of bacteria congregate.

In summary, bacteria are single-celled microbes without a nucleus. Bacteria play many roles in our ecosystem. Bacteria are decomposers which break down dead material and recycle it. They also can be producers, making food from sunlight, such as photosynthetic bacteria, or chemicals, such as chemosynthetic bacteria. Some bacteria are pathogenic meaning they can cause disease, and others live in harmony, helping organisms like plants grow, or humans digest food.

Succession in Freshwater and Terrestrial Ecosystems