The economic and population expansion of the United States in the 1800s was tremendous. Learn about how slavery and immigration increased the population and how the evolvement of transportation and corporations influenced economic expansion. Updated: 08/27/2021
Create an account

If there is one word that could characterize America in the first half of the 19th century, it would be ''growth.'' The population grew; territory grew; the economy grew; even slavery, unfortunately, grew.

This chart reflects total U.S. population as determined by the decennial census. As you can see, America's population grew by about a third every decade, without exception, due mostly to natural increase or immigration. Although the largest total increase occurred from 1850-1860, the greatest percentage jump happened just after the turn of the century. As you may recall, that coincides with the Louisiana Purchase in 1803 and all the people in that territory became American citizens overnight. So, that increase is something of an anomaly, representing neither the birth rate nor immigration.

What you can't see from this chart is where the people came from and where they went. Mid-century saw a second rush of immigrants from Ireland and Germany, mostly due to crop failures in those countries. But then, there was also the addition of land and people in the southwest from war with Mexico at that time. This chart also does not identify race, but you should remember that enslaved people were counted as 3/5 of a person for population purposes. Logically, some of this rise in population was a result of an increased slave population. Though the importation of new enslaved people had been banned in 1808, the introduction of cotton into southern agriculture created a sharp increase in the demand for slave labor. By the time President Lincoln was elected in 1860, there were four times more slaves than in Jefferson's day. 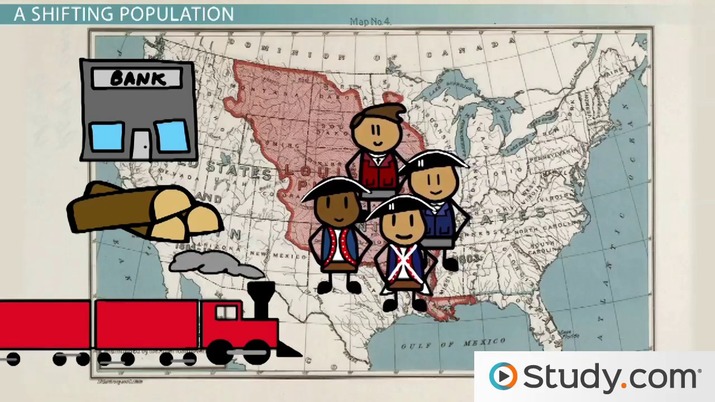 Coming up next: American Industrialization: Factory System and Market Revolution

By 1860, the U.S. had 33 states and more than 31 million people, making it the fourth most populated nation in the developed world, and half of them were under the age of 30! Although most Americans still lived in rural or semi-rural areas, there was a tremendous increase in urban areas. There were 45 cities with a population of 20,000 or more people (compare that to just two when the nation was born), and all those people had to be fed. Thankfully for them, a lot of Americans were moving west. Fueled by territorial acquisitions, cheap land and dramatic innovations in technology, about a third of the population lived beyond the Appalachian Mountains at this time. This land rush created a demand for credit from the banks, a distinct uptick in the lumbering business (to build homes and towns) and the need for dependable, high-speed transportation.

National roads and private toll roads (called turnpikes) crept slowly across the map, but moving any quantity of goods across the country over land was nearly impossible. Steamboats allowed 2-way river traffic, especially along the Mississippi and Ohio Rivers. When the state of New York granted a monopoly on ferry service to New Jersey for the steamboat's inventor, the Supreme Court, under Chief Justice John Marshall, overturned it in 1824. This opened the door for competition along America's waterways and kept prices low.

The rivers became the most important form of transportation for farmers in the interior of the continent moving their goods to markets in the east. Canals linked the waterways to one another and were largely constructed with public funds. This kind of internal improvement became a hotly contested political issue in the first half of the 19th century as residents in some areas became resentful of the money spent in other regions of the nation. Railroads began connecting eastern locations in 1827, and foot trails opened up as far west as the Pacific Ocean and as far south as Mexico. Enterprising individuals began trading along the Santa Fe Trail, and fur trappers went deep into the Rocky Mountains. New cities sprang up everywhere along the new transportation routes, and places like Chicago, Cincinnati and St. Louis helped drain some of the power and influence away from New York, Boston and Philadelphia.

Towards a Market Economy

Supreme Court protection for corporations began another shift in the American economy. This business model limited the liability of investors, making it easier to raise huge amounts of private capital. Chartered by individual states, corporations (with the help of some manufacturing inventions) helped pay for factories, which slowly transferred population into the cities, and along with the farming revolution in the west, helped push America towards a market economy.

In the early 1800s, the United States was growing. Immigration, birth rates, new territory and the demand for slaves helped the American population to increase by a third every decade. It had taken less than a century for the new nation to grow from just 13 little states to the fourth biggest country in the world. A lot of these new residents went west and farmed the land to provide food for the rapidly increasing cities. This was made possible by developments in transportation, especially steamboat river traffic. Midwestern cities grew in size and power. Corporations helped transform America to a market economy.