Imagine a country with a well-educated population, a stable government and ample natural resources. You'd think it would be an economic success story. However, bad government decisions have hampered Iran's economic growth.
Create an account

Let's pretend that we were to design a perfect economy for a country. First of all, you'd probably want to start with natural resources, especially petroleum and natural gas. Then you'd likely want to add in a population that is constantly looking to expand its economic potential, whether through education or technical research. Finally, to ensure a fair chance for everyone, you'd probably want some form of social safety net to keep an economic downturn from turning into massive economic chaos. In short, you'd want what Iran is capable of doing.

Wait, Iran? Home to US Sanctions, 'death to America' chants and a nuclear program that may or may not be peaceful? Yes, Iran. In reality, Iran, despite these issues, and many more we will discuss in this lesson, is actually a middle-income country that, once the issues of sanctions and its own inefficiencies are removed, could have the potential to be a regional economic powerhouse. 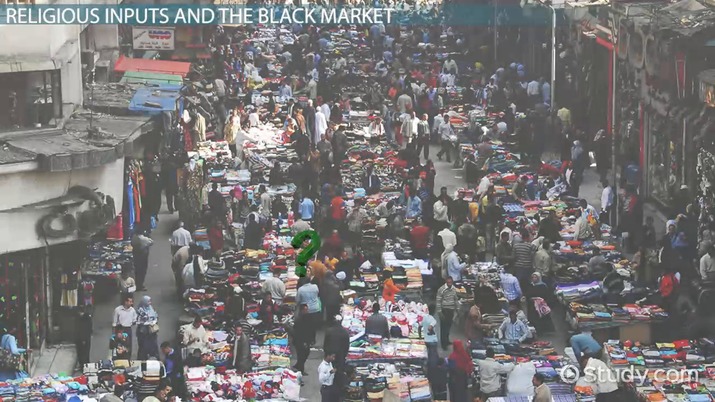 Coming up next: The Political Structure of Iran

Like many other countries in the Middle East, drilling for oil and natural gas is a crucial part of the Iranian economy. More than 80% of Iran's exports are in some way, shape or form related to oil or natural gas, and the country has ten percent of the world's known reserves of oil. However, what's more startling is that Iran also has 15% of the world's supply of natural gas. Much of this potential is located in the south and southwest of the country, especially those areas near the Persian Gulf and the Iraqi border.

Petroleum and natural gas have long been central parts of the Iranian economy, and the cause of much of the country's political turmoil throughout the 20th Century. On more than one occasion, foreign powers have overthrown the Iranian government in order to gain greater access to its oil reserves. Since the Islamic Revolution of 1979, such coups have been unsuccessful.

Religious Inputs and the Black Market

Yet, the revolution of 1979 didn't just bring decades of political continuity to Iran, it also brought the impact of religion into the marketplace. For example, Islamic finance has been used in Iran for quite some time, even if the traditional Islamic finance powerhouses, like Dubai, ignore their banks as the Dubai banks are Sunni and Iranian banks follow Shia doctrine. However, the most enduring impact Islam has had on Iran actually predates the revolution. Started as royal 'charities' that actually served only to provide special treatment to insiders, Bonyads are now government-subsidized corporations that are horribly inefficient. Technically, these are supposed to form a sort of social safety net for everyone. However, the fact of the matter is that they are too inefficient to offer much safety except for their managers.

To that end, with much of Iran's economy under the rule of these Bonyads, a number of Iranians have turned to the Black Market, an unofficial network of merchants who can sell goods that are otherwise unavailable. Literally anything that you could think of wanting is available on the Black Market, from bread and cooking oil to tablets and the latest copies of Hollywood's movies. However, since the Black Market doesn't pay any taxes, it is heavily targeted by the authorities.

One of the reasons for the success of the Black Market is that the Iranian government has continued to attract sanctions, or economic limitations, as punishment for its attempts to develop nuclear technology. While the Iranian state has said repeatedly that it only intends to develop nuclear reactors for peaceful purposes, its warlike statements pertaining to the nation of Israel have placed many in the West on alert. As a result, Iran is unable to reach its full export potential, especially with petroleum protects.

It's not just the official sanctions of the EU and the United States that have proven problematic for Iran. Along with the sanctions comes a reluctance for outsiders to invest in the Iranian economy. Some of this is no doubt as a result of the perceived corruption within the official economy, but the political uncertainty caused by Iranian political actors is far from helpful. As a result, despite having a highly educated population that is made up of an enormous number of young people, the Iranian government has failed to secure private-sector investment to help this generation thrive.

Such failure is a real shame, as Iranians are among the most well-educated groups within the Middle East. Multilingual with a public school system that emphasizes knowledge of math and science, Iran also has a cultural tradition of valuing education. This is apparent in the fact that, despite much of the intelligentsia leaving Iran after the 1979 revolution, the remaining scholars were able to quickly reestablish a thriving academic society.

However, even amidst all of this modernization and education, the older arts of Iranian culture are not forgotten. Specifically, this is apparent in examining how traditional industries, especially carpet-weaving, have continued to thrive despite uncertain economic conditions. The craftsmanship of these carpets is prized the world over and remains a sizable chunk of Iranian exports even to this day.

In this lesson, we saw how the Iranian economy has a great deal of potential but is held back by the actions of its government. Despite being home to sizable portions of the world's oil and gas reserves, as well as having an extremely well-educated population, Iran's government continues to attract sanctions while dissuading investors.

Despite a multitude of natural resources, the Iranian economy has not been able to reach its full potential. Traditions, restrictions, government inefficiencies, and sanctions have all played a role in Iran's ability to develop a thriving economy. If the nation can find a way to curtail these restraints, Iran has the potential to be one of the strongest economies in its region.

Review economic aspects of life in Iran via the lesson above, then discover your ability to:

The Troubles in Ireland and Bloody Sunday

What Is Catholicism? | Religion, Beliefs & History

What is the Law of Demand in Economics? - Definition & Example

Investment vs. Investments in Economics

What is a Plot Diagram? - Definition & Examples