Ecosystem equilibrium refers to a balanced community of living organisms and non-living components in a particular environment. Examine the concept of ecosystem equilibrium, learn about producers and consumers, and explore an example. Updated: 01/20/2022
Create an account

Imagine walking across a balance beam. You keep your arms out and sway from side to side as you walk across the beam. As long as you keep your weight in the center, you stay balanced and stay on the beam. But if you become out of balance you fall off. Being in balance is important for many aspects of living things—not just playing on the playground. 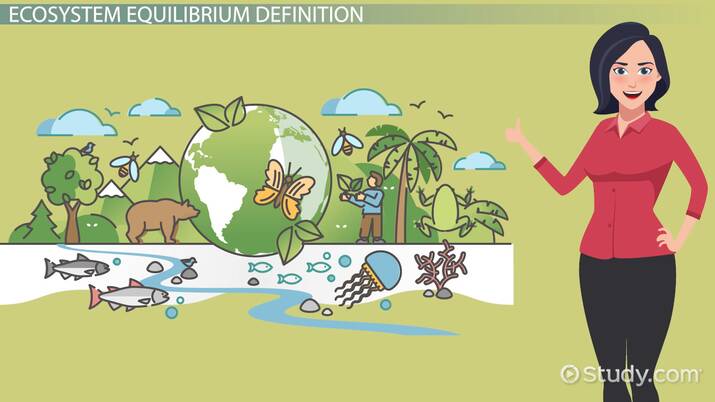 Coming up next: Ecosystem in a Jar Lesson Plan

Ecosystems must have just the right amount of non-living things like sunlight and water. However, they also need to have the correct balance of different species to stay in equilibrium. Too many or too few of a species can cause a population crash, where the species living in an ecosystem die off. Population crashes are devastating for ecosystems.

So how do ecosystems remain in equilibrium? Each ecosystem has a delicate food web that starts with producers, or organisms that make their own food. Plants, algae, and phytoplankton are common examples of producers. This is the largest collection of organisms in an ecosystem. Think about how many individual blades of grass, trees, shrubs, and other plants you see while hiking.

Primary consumers eat producers. These are animals like deer, squirrels, and rabbits. You might see a few of these on your hike through the woods, but you definitely see more producers. This is because there needs to be more producers than consumers in order to support their population. If there are too many consumers, they will eat all the food and the ecosystem will collapse.

These patterns for populations of organisms apply to all ecosystems. There should be the most number of producers and the least number of tertiary consumers. Too many or too few of any level of the food web can have catastrophic effects.

Populations of primary consumers that were prey for the wolves increased, such as deer and elk. In order to feed themselves, they extended their diet from grass to other plants like willows. The loss of these trees ended up affecting other populations such as beavers. As the beavers decreased so did their dams, which changed the entire river landscape in Yellowstone. The reshaped rivers changed populations of fish and the animals that feed on them.

But in the 1990s scientists reintroduced wolves into the Yellowstone ecosystem. The effects were more drastic than scientists could have predicted. Surprisingly, the elk population stayed high, but the pressure from wolf predation kept the elk on the move, which allowed the restoration of willow trees. This in turn allowed the beaver population to expand, changing the waterways of Yellowstone. Fish populations recovered as did their predators. The ecosystem returned to equilibrium with the reintroduction of this keystone species.

Many of us enjoy a salmon filet for dinner. Seafood has been touted by medical experts as a healthy source of protein. However, this seafood comes with a price and not just the money paid at the fish counter. Bycatch is the sea life accidentally caught in nets or other gear during fishing. Scientists estimate that around 17% of catch is actually bycatch.

One of the main problems with bycatch is when top predators are caught in the nets, leading to population declines and even population crashes. One such threatened species is the oceanic whitetip shark. These sharks live in tropical and subtropical waters around the globe, but despite their large distribution they are one of the most high-risk species for bycatch. Their fins also have a high value on the market.

Eliminating tertiary consumers like this leads to a disruption in equilibrium. Sharks are a top predator and control other populations of fish such as marlin, tuna, mackerel, and other aquatic animals. Without these predators these populations are free to expand, eating other species or producers to extinction. In order to restore equilibrium to this system, we must stop hunting the whitetip sharks and other top predators.

As we learned, ecosystems become out of balance when there are too many or too few of a species, particularly keystone species, which are species that regulate an ecosystem's equilibrium. The greater Yellowstone ecosystem was out of equilibrium until wolves were reintroduced, shaping not only other species but also non-living parts of the ecosystem. Currently, the hunting and bycatch, which is the sea life accidentally caught in nets or other gear during fishing, of oceanic whitetip sharks is putting marine ecosystems out of equilibrium with the potential for a population crash, which is when the species living in an ecosystem die out.

This is why it's so important for us to understand ecosystems and how the species in them interact. After all, we're just another species in the food web!

What Is Ecological Balance? - Definition & Importance

Life Cycle of a Grasshopper: Lesson for Kids

Roles of Consumers & Producers in a Resource Market

What is an Ecological Imbalance? - Definition & Explanation