Copyright
Lesson Transcript
Instructor: Joshua Anderson
Habitats are areas of the ecosystem where specific organisms live, while niches are the individual roles that organisms play within the ecosystem. Discover factors that affect an animal's niche and how population density impacts an ecosystem. Updated: 08/17/2021
Create an account

This is Kiki the lion. Kiki is a female African Lion that lives in the Masai Mara National Reserve in Kenya. The Masai Mara is a national park whose mission is to preserve and protect the northern part of the Serengeti-Mara ecosystem. You may remember that an ecosystem is composed of all organisms and all abiotic factors within a geographic location.

The Serengeti-Mara ecosystem contains a stunning array of animals, including vast herds of wildebeest, zebras and Thompson's gazelles and smaller populations of elephants, rhinos, giraffes, crocodiles, warthogs, hyenas and over 470 species of birds - not to mention all of the lizards, snakes, insects and other smaller animals. And yes, it also includes a population of lions, as well as populations of other big cats like leopards and cheetahs.

The Serengeti-Mara ecosystem also includes all of the plant life in the area. After all, what would all of the wildebeest and zebras eat if there wasn't an abundance of grasses, and how would the giraffes survive if there were no acacia trees providing leaves for them to eat? And what about all of the abiotic factors, otherwise known as nonliving environmental factors like climate, elevation, soil type and sources of water?

Okay, so by now you're probably beginning to realize how huge and complex an ecosystem can be. But let's go back to Kiki, our lion. Although Kiki is a part of this vast ecosystem, there are likely going to be areas that are suitable for Kiki to live in and areas that are not. A habitat is an area that is suitable for a particular organism to live in. In Kiki's case, her habitat is the grassy plains and open woodland, or savanna, of sub-Saharan Africa. 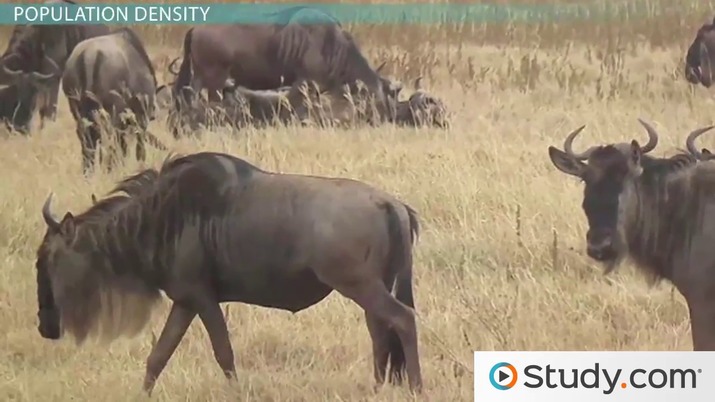 Coming up next: Food Chains, Trophic Levels and Energy Flow in an Ecosystem

Now we know what Kiki's habitat is, and we know that she is a part of the Serengeti-Mara ecosystem, but how does she fit into the ecosystem? Being a lion, Kiki is a predator, which means that she hunts and kills other animals for food. But simply being a predator doesn't completely explain how Kiki fits into the ecosystem. There are lots of different types of predators that live in different areas of the ecosystem and eat lots of different types of animals. What we are trying to determine here is Kiki's niche, or the role that she plays in her ecosystem.

Lions are big game hunters of the open grasslands. The animals that they hunt most often are wildebeest and zebras, but they'll take down even larger animals like immature water buffalo and young giraffes if they get an opportunity. The lion hunting style is to ambush and overpower, usually as a group.

All of these details help to define the niche of a particular species. Organisms carve out their own unique niches that they specialize in, and it is extremely unusual to find two organisms with the same exact niche, so let's take a look at how Kiki's niche is different from some other similar predators of the Serengeti-Mara ecosystem.

First, let's take look at the cheetah, which is another big cat predator that shares the same habitat with lions: the open grasslands. However, cheetahs have a different niche because they usually hunt smaller, faster animals like gazelles, rabbits, young warthogs, etc. They also have a different hunting style, which is to use their speed to run down the quick animals that they hunt. Because of these differences, lions and cheetahs have different niches and can coexist in the same habitat.

Leopards are another big cat predator that live in the Serengeti-Mara ecosystem. Their food source overlaps with both lions and cheetahs because leopards will take down wildebeest, zebras, gazelles and warthogs; however, their habitat is a little different.

Leopards live in wooded areas, and their hunting style relies more on surprise and their fantastic leaping ability as opposed to the hunting styles of lions and cheetahs that rely more on strength and speed, respectively. So even though these three predators share many features and may seem to be in direct competition with each other at first glance, we can see how each of them has their own specialized niche and, therefore, how they can all coexist in the same ecosystem.

Let's switch gears a little bit now and talk about different ways that population size is regulated using one of the Serengeti-Mara ecosystem's most abundant animals, the wildebeest, as an example. Within an ecosystem, we can measure the density of each population by calculating the number of individuals per unit of area.

For wildebeest populations, shelter isn't a factor, but habitat, food and water are definitely limiting factors. Wildebeest in the Serengeti-Mara ecosystem follow a well-defined annual migration route where they travel in a circuit throughout the entire ecosystem, following the availability of water and the growth of grasses in different locations within the ecosystem.

In most species, reproductive rate is also density-dependent. This has been experimentally proven for many species. In the case of wildebeest, reproductive rate is linked to the health of the individual animals, which is directly linked to the availability of food and water, which themselves are density-dependent factors. If the population gets too big and food is scarce, more individual females will be in poor health. These individuals will probably not successfully breed either, because they don't enter estrus and mate, or even if they do mate, they might miscarry if they cannot find enough food to support a pregnancy.

In review, the Serengeti-Mara ecosystem is a large ecosystem that contains parts of Northern Tanzania and Southern Kenya just east of Lake Victoria. This ecosystem contains a rich variety of animal and plant life as well as abiotic factors, or nonliving environmental factors like climate, elevation, soil type and sources of water.

Kiki the lion is a female African Lion that is a part the Serengeti-Mara ecosystem, but she doesn't live in all parts of the ecosystem. Being a lion, she is adapted to live in certain areas of the ecosystem called habitats, which are areas that are suitable for a particular organism to live in. In Kiki's case, her habitat is the grassy plains and open woodland, or savanna, of sub-Saharan Africa. Every type of organism in an ecosystem has a niche, or a specific role that it plays within the ecosystem. Kiki is a predator, which means that she hunts and kills other animals for food, but just being a predator does not completely explain Kiki's niche. Other factors, like her habitat, the types of animals she hunts and the methods she uses while hunting also define her niche.

Food Chains, Trophic Levels and Energy Flow in an Ecosystem