Ron has a B.A. in Management, Master’s in Psychology, and PsyD in Clinical Psychology. He has over 20 years of experience in counseling, therapy, and drug and alcohol recovery. He has worked in correctional facilities throughout his career.

Edward Titchener was the founder of structuralism, a school of thought that considered that thoughts were conformed by basic elements such as sensations. Explore Titchtener's contributions to psychology and the concepts of structuralism and experimental psychology, as well as their place in today's psychology. Updated: 08/14/2021
Create an account

If someone were to place an apple on a table in front of you, would you know what it was? Of course you would! You would see the color and shape of the object and deduce in a split-second that it was an apple. What if you closed your eyes and someone placed the object in your hands? You most likely would still know that it was an apple by the texture, size, and shape. What if they cut out a wedge and held it under your nose, or allowed you to taste it? Still an apple, right?

You have just demonstrated what Edward Bradford Titchener referred to as the psychology of structuralism. Titchener believed that all thoughts can be broken down to basic elements, specifically, sensations. Titchener would say that when you identified the object, you put together memories of sensations from your past (color, shape, texture, smell, and taste) and hence you deduced the object was an apple.

Titchener strongly advocated for psychology as a science and therefore believed it was imperative to classify the components of thought; after all, science deals with facts, not theories. He reasoned that if a thought, like 'this is an apple,' is a collection of elements, those elements or sensations should be identifiable. Much of his work focused on sensations, and he concluded that there are over 40,000 sensations that comprise thought, primarily related to vision and hearing.

Structuralism focused on immediate mental experience. Titchener often stated that he was only concerned with the 'is,' and that he left the 'is for' to others. Essentially, he was stating that he was only concerned with facts and that to ask the question 'is for?' was to delve into speculation, something that Titchener personally detested. He believed that for psychology to be accepted as a science, it needed to focus on facts. 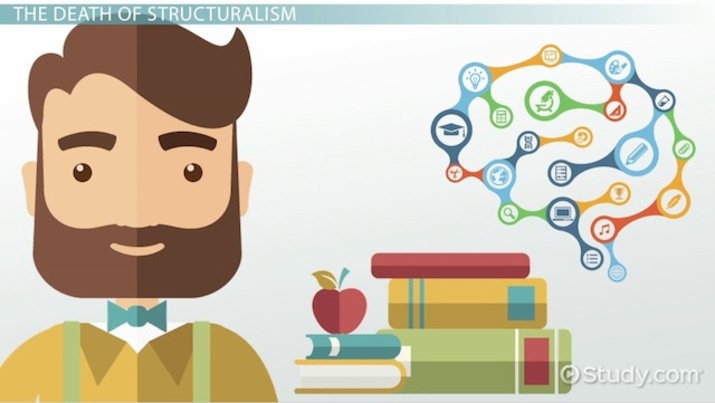 Coming up next: Ethical Code of Conduct: Definition & Example

Born in England in 1867, Titchener lived until 1927. Prior to receiving his doctorate, Titchener had the opportunity to study under Wilhelm Wundt and his school of voluntarism. After coming to America, he broke away from many of Wundt's theories and founded the structuralism 'school of thought.' Where Wundt was concerned with studying consciousness, Titchener simply wanted to describe an individual's current thoughts at any point in time.

At age 25, Titchener received an appointment from Cornell University as a psychology professor and within a few years he had developed the largest doctoral program in psychology in the United States. One of Titchener's students, Margaret Floy Washburn, became the first woman ever to receive a doctorate in psychology. Titchener was a charismatic speaker and strict authoritarian who was adored by his students. His notoriety quickly spread until he became recognized in his day as the foremost experimental psychologist in America.

To be accepted as a science, Titchener knew it was essential that psychology theories be testable and the results measurable. He relied heavily on introspection, the process of examining one's own thoughts, as his primary tool for measuring outcomes. He trained his subjects to report the elements or sensations of thoughts, rather than name the object itself. For Titchener, simply calling the object an 'apple' was a grievous mistake and he referred to this as stimulus error.

The Death of Structuralism

It could be said that Titchener was single-handedly responsible for the popularity and acceptance of structuralism, and when Titchener died in 1927, so did his structuralism. Concerned only with describing mental experience, structuralists had no interest in abnormal behavior, personality theory, the study of learning, or any of the other increasingly popular applications for psychology. Structuralism was eventually replaced by functionalism, the study of the functions of the mind. Modern psychologists consider that nothing of Titchener's structuralism has survived him.

Edward Titchener was a prominent psychologist in the United States at an early age. Born in England in the 1860s, he moved to the states and founded the idea of structuralism, the idea that all thoughts are structured by basic elements, specifically sensations. He helped to establish psychology as a science using experimental psychology. Though structuralism mostly gives way to functionalism and other theories, Titchener laid the foundation for psychology as an experimental science.

The Influence of Animal Psychology on Behaviorism