Title VII of the Civil Rights Act of 1964 is important in sustaining equal employment opportunities for people of a different race, color, gender, religion or national origin. Learn the breakdown of its components in this lesson. Updated: 10/01/2021
Create an account

Linus is a new human resources specialist that is undergoing orientation with Mary, the manager of the company's human resources department. Today, Mary is explaining compliance with Title VII of the Civil Rights Act of 1964. Mary explains that Title VII applies to private sector employers, state government agencies and local government agencies that employ at least 15 people. It prohibits discrimination in employment based upon race, color, gender, religion and national origin. 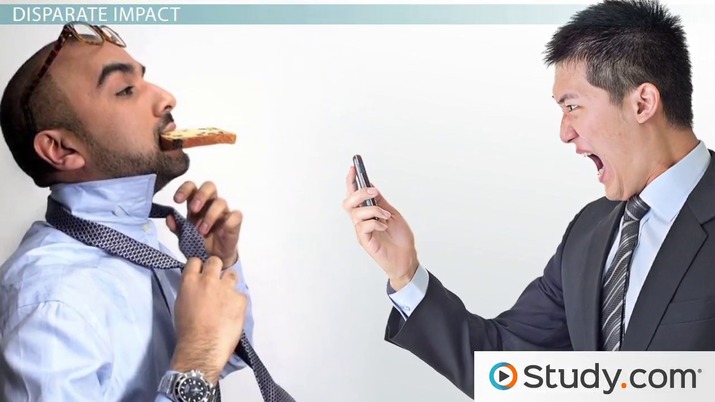 Linus asks what employment activities are covered. Mary tells him that a covered employer may not discriminate in hiring, firing, pay, benefits, training, layoffs and any other term or condition of employment. She also tells him to remember that a job applicant is covered under the Act just like employees.

In making any employment decision, it's important that the company use neutral criteria that does not consider employee or applicant characteristics prohibited by Title VII, such as race, gender and religion. Applications and other pre-employment inquiries should only request information that is necessary for determining whether a person is qualified. This usually does not include things such as race, nationality, gender and religion.

Linus asks if there are any exceptions to the prohibition against discrimination, and Mary tells him that there is. An employer can make a hiring decision based upon race, sex and national origins if one of these characteristics is a bona fide occupational qualification. Mary tells Linus that an employer must establish that the required characteristic is necessary for the success of the company's business and another protected class does not have the characteristics necessary for success in employment.

Linus asks Mary for some examples. Mary tells him that a church can discriminate against non-followers of the religion in hiring someone as clergy because membership and belief in the religion is essential to success at the job. However, a church probably can't discriminate against people hired to clean or do secretarial work based upon their religious affiliation. Mary also explains that hiring an actor based upon race or gender may be a bona fide occupational qualification if the role requires a specific race or gender.

Linus is a bit confused, so Mary gives an example. Imagine that an African-American woman applied for a management position in the company. She was qualified for the job but was not hired. A Caucasian male was hired instead. The employee can make out a prima facie case.

Once a prima facie case is made, the burden is on the employer, who has to present some evidence of a legitimate, nondiscriminatory reason for the employment action. In Mary's example, the company could present evidence that the person hired for the management position had more job experience and an MBA, while the African-American applicant did not.

For example, a policy that ends up precluding members of a certain race will constitute discrimination. Mary emphasizes to Linus that a discriminatory motive is not necessary for liability under this theory. Once the disparate impact has been established, an employer must be able to justify the policy or procedure causing the disparate impact as a business necessity. For example, an engineering company's engineering educational requirements for hiring engineers may create a disparate impact, but the policy is a business necessity for the hiring of engineers.

Handling a Charge of Discrimination

Mary does note that before an employee or applicant can even file a discrimination lawsuit, a charge must be filed with the Equal Employment Opportunity Commission (EEOC). An employer facing a charge of discrimination needs to cooperate with the EEOC. Once a charge is filed, the EEOC will provide notice, and the employer should file a statement of position. This is the company's chance to explain the situation.

The EEOC will probably make a request for information, which may include a copy of the company's employment policies and procedures, as well as the employee's personnel file. The EEOC may visit the work site and interview relevant witnesses, such as managers and co-workers. The EEOC will also offer the parties a chance to mediate before the investigation concludes.

After the investigation is concluded, the EEOC will make a finding. It may find there is no reasonable cause to believe discrimination has taken place. If this is the case, it will issue a Dismissal and Notice of Rights (often referred to as a right to sue letter), telling the charging party that he or she has a right to file a lawsuit within 90 days from the receipt of the letter. If the EEOC finds reasonable cause to believe discrimination has occurred, it will issue a Letter of Determination. It will try to resolve the matter through an informal process called conciliation. If conciliation fails, the EEOC will either file a lawsuit or provide a Notice of Right to Sue to the charging party if it decides not to sue.

Mary finishes up her presentation with a discussion of retaliation. Title VII prohibits an employer from retaliating against an employee or applicant because she files a charge of discrimination, complains to the employer about discrimination or participates in a discrimination investigation or lawsuit. Linus asks Mary what is considered retaliation, and she explains that it can include such things as firing, demoting and harassing.

In making employment-related decisions, an employer should only use neutral criteria and avoid making decisions based upon race, color, gender, religion and national origin. However, if the employer can establish that one of these characteristics represents a bona fide occupational qualification that is a business necessity and is required for success in employment, then the characteristic can be used as a criterion.

The Equal Employment Opportunity Commission is responsible for enforcing the provisions of Title VII. Before a lawsuit can be filed against an employer, the complaining party must first file a charge of discrimination with the EEOC, which will investigate the charge. If the EEOC finds reasonable cause to believe discrimination has occurred, it will try to settle the matter through conciliation. If unsuccessful, it will either sue the employer or issue a Notice of Right to Sue to the charging party. On the other hand, if the EEOC finds no reasonable cause to believe discrimination has occurred, it will dismiss the charge and issue a Dismissal and Notice of Rights. At that time, the charging party may file a lawsuit.

You will have the ability to do the following after watching this video lesson: