Geography directly shaped the lives of people in the Maya, Aztec, and Inca civilizations. Learn how geographical location shapes lifestyle with the Maya on the Yucatán Peninsula, the Aztecs in the Mexican valley, and the Inca in the Andes mountains. Updated: 10/30/2021
Create an account

You Are Where You Live

Where we live is important. If you live in the mountains, you may have learned to ski. If you live near water, you're probably pretty good at swimming. Geography plays an important role in culture. People in the desert are more respectful of water. People on the plains are careful not to waste wood. For the ancient people of Mesoamerica, the areas that today are Central and South America, geography was crucial in the development of civilization.

To create a civilization, people needed an area where they could be safe and where there were enough resources for them to settle in one place without having to leave all the time to find food. There were at least three places like that in Mesoamerica, and three great civilizations arose: the Maya, the Aztecs, and the Inca. 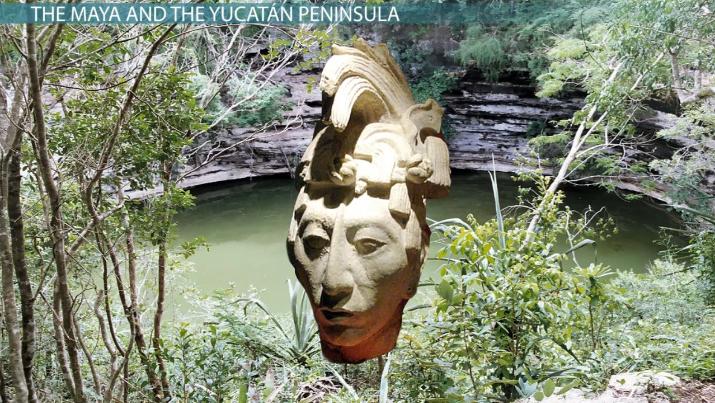 Coming up next: Life in the Maya Civilization

The Maya and the Yucatán Peninsula

One of the three great Mesoamerican civilizations was the Maya, the people who spoke the Mayan language. They lived in the tropical rainforests of the Yucatán Peninsula, which today is the Southern tip of Mexico and parts of Belize, Honduras, Guatemala, and Nicaragua.

Maya civilization consisted of city-states, isolated urban centers that were independent governments. Unlike the Aztecs or Inca, the Maya were never a unified empire, largely because of geography. The dense, thick jungle was simply too great an obstacle for widespread urbanization. The landscape kept the many Maya cities naturally isolated from each other, so each one maintained an independent identity. Yes, the cities went to war and invaded each other, but this took immense effort. Many Maya cities were also built on cliffs overlooking the Gulf of Mexico, which was another use of landscape for natural defense.

Although the jungle isolated the cities, it also provided for them. The rainforest has an incredibly diverse food supply and lots of fresh water. The ocean provided fish and an easy route for transportation. In the Yucatán Peninsula, the rainforest also featured many cenotes, large sinkholes in the middle of the jungle with fresh water. These cenotes were so important to the development of Maya civilization that they were seen as homes of the gods and sacrifices were often made to the cenotes.

The Aztecs and the Valley of Mexico

In Central Mexico, north of the Yucatán, another Mesoamerican civilization thrived. The Aztec Empire was based in the Valley of Mexico, a wide, high elevation valley in the mountains of Central Mexico. In this wide valley, the Aztecs were unified as one people, who called themselves the Mexica.

The Valley of Mexico was perfect for the Aztecs because it both provided natural defense and had all the features needed for the development of civilization. First, the valley featured several lakes. These lakes were briny and salty, but the Aztecs learned to dam the lakes so that fresh water flowing down from the mountain peaks surrounding the valley and the salt water would remain separate. The Aztec capital, Tenochtitlán, was in the middle of Lake Texcoco, which at 580-square-miles-large made for a good natural defense. The lake also sat at 7,336 feet above sea level and was surrounded by mountains that were up to 10,000 feet taller than the city. All in all, Tenochitlán was not an easy location to attack and, therefore, a good capital city for an empire.

Additionally, lake soil is very fertile, which allowed the Aztecs to develop agriculture. Agriculture is essential for civilization because it lets people live in one place, develop a surplus, and grow in population. Since they lived in the middle of a lake, the Aztecs built chinampas, long platforms of soil floating on shallow rafts, and grew their crops on these. Each floating garden could be up to 300 feet long. Chinampas were very efficient means of agriculture, and the Aztecs were able to harvest their crops up to seven times in a single year.

The Inca and the Andes

The last of the three greatest Mesoamerican civilizations were the Inca. They lived in the high mountains of South America called the Andes. The Andean Mountain range goes from 13,000-22,000 feet above sea level, and Incan cities could be found all the way at the top.

Just like the Aztecs in the Valley of Mexico, the Incan Empire was likely formed in the Andes because it made their cities extremely defensible. For a military empire, this is crucial. Incan cities were built high in the mountains on cliffs that dropped hundreds of feet. As a result, the Inca were in great shape and were some of the best runners in history.

Mountains have lots of natural resources to sustain civilization, including fresh water and food. However, they are not always easy to get to. This brings up another factor that all three civilizations had in common — the landscape encouraged them to think. Many of the greatest civilizations in history lived in places where their human ingenuity was required to fix the problems of their geography. These cultures valued education, engineering, and creative thinking. For the Inca, life in the high mountains meant they had to develop efficient systems of roads for communication, aqueducts, and irrigation for water and new methods of agriculture. What they created was a system of terraces, flat surfaces supported by retaining walls, which were large enough to grow crops. Terraced agriculture turned a steep mountainside into a garden lush enough to support a growing empire.

Geography has affected every civilization in history, just like it affects us. The Mesoamerican civilizations, the complex societies of Central and South America that developed before the arrival of Europeans, were no exception. The three greatest civilizations, the Maya, Aztecs, and Inca, all developed because they found good locations that supported their growth.

The Maya found jungles that protected them from invaders with fresh water sinkholes called cenotes. These jungles also kept the Maya cities isolated, and they never developed a single Maya identity. The Aztecs settled in the Valley of Mexico, in a high mountain lake with fertile soil and natural defenses. The Inca chose the high, abundant peaks of the Andes Mountains in South America, where they learned to build platforms with retaining walls called terraces for agriculture. For each of these civilizations, geography played an important role in their development.

Once you are finished with this lesson you should be able to:

Artistic & Oral Traditions of the Inca

The Religions of Meso-America