Copyright
Lesson Transcript
Instructor: Benjamin Olson
Following the Haitian Revolution that won freedom from slavery at the cost of over 100,000 lives, the country was rebuilt. See an overview of the revolution, the subsequent Civil War, and both the domestic and international effects of these conflicts. Updated: 12/13/2021
Create an account

Overview of the Haitian Revolution

During the slave revolts that gradually morphed into a full-blown revolution, most participants in the Haitian Revolution had fairly limited goals: to destroy slavery and bring about a more free society on the island of Saint-Dominique, a French colony in the Caribbean. Beyond these goals, most of the slave forces had few long-term plans for what would come after emancipation.

Some of the leaders in the Haitian Revolution were steeped in Enlightenment philosophy and hoped to model Haiti on the principals of the French and American Revolutions. Unfortunately, many of the most educated and democratically minded of these leaders (most significantly, Toussaint L'Ouverture) died before the revolution found its end. Those that were left ruled the new nation single-handedly, with military might and sometimes cruelly.

During the Haitian Revolution, more than 100,000 residents of the island had died. Few parts of the island had been unaffected by fire, warfare, disease, or general mayhem. The once-booming sugar-based economy was now seriously crippled, and the newly-freed Haitians were faced with the difficult task of rebuilding the country they had won. 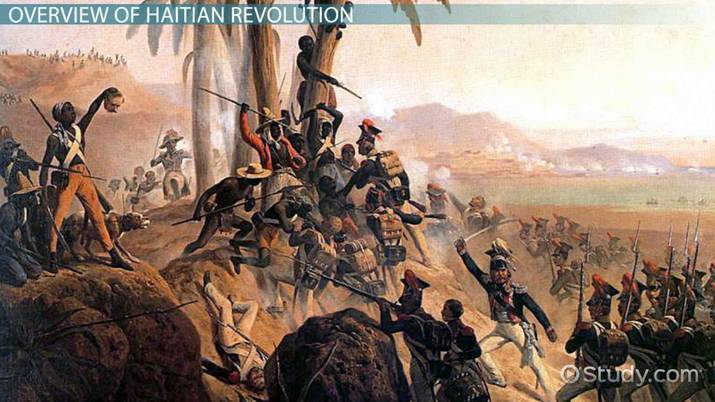 Coming up next: Haitian Revolution Battles

Civil War After the Revolution

Haiti's first post-revolutionary leader was the fire-brand General Jean-Jacques Dessalines. It was Dessalines who drafted the strongly worded Haitian declaration of independence from France and renamed the island 'Haiti,' after the name used by the island's original indigenous inhabitants. Dessalines also ordered the mass slaughter of around 5,000 of the island's remaining white inhabitants.

Dessalines named himself 'Governor for Life,' but eventually changed his title to 'Emperor.' His life term turned out to be rather short; Dessalines was assassinated in 1806 by his own men after ruling with a cruel hand for only two years. After Dessalines' brief reign was brought to a close, Haiti plunged into civil war.

At the war's conclusion, the island was divided in power between two of Dessalines' generals. The south of Haiti fell under the rule of the General Alexandre Petion. In the north, Henri Christophe named himself king and began construction on what came to be known as the Citadel, a huge fortress designed to repel any foreign invaders who might wish to invade Haiti and reinstate slavery.

International Responses to the Revolution

Whites in Europe and throughout the Americas were predictably horrified by the Haitian slave revolt that resulted in a nation controlled by blacks. Although the threat of slave rebellions had always loomed possible in societies that practiced slavery, few took the prospect of a wide-scale, successful slave rebellion seriously until the Haitian Revolution unfolded.

The young United States imposed an embargo on Haiti, causing further financial chaos in post-revolutionary Haiti. The French under Napoleonic rule continued to plan a re-invasion of Haiti, although this never came to pass. Haiti was not recognized by either France or the United States 1825 and 1865, respectively. This eventual recognition only occurred because Haiti was forced to pay an exorbitant 150 million gold Francs in reparations to France for the revolt and secession. The huge sum of money was paid to end the country's economic isolation and to reestablish trade with its neighbors, but the debt crippled Haiti's economy so severely that it never really recovered.

Slaves in the United States and throughout the Americas were inspired by the success of the Haitian Revolution. In 1811, eight years after Haiti gained independence, the German Coast Uprising in Louisiana became the most serious slave revolt in the United States. There is little doubt that the participants of the German Coast Uprising took inspiration from the Haitian Revolution, although they were not nearly so successful.

Throughout the southern plantations in the United States, slave holders increased their vigilance and ramped up brutality to dissuade any would-be rebels from imitating their Haitian neighbors. Conversely, the Haitian Revolution reaffirmed for American abolitionists the conviction that slavery could not continue forever.

The Louisiana Purchase, in which the United States obtained much of the Western United States from France for a very reasonable sum, was also a consequence of the Haitian Revolution. With the highly-profitable sugar plantations of Haiti no longer under France's control, the French colonial holdings in North America were no longer very useful, resulting in the Louisiana Purchase.

Domestic Effects of the Revolution

Although slavery and French colonial rule had been abolished by the Haitian Revolution, political stability and economic prosperity proved elusive. Petion and Christophe, as well as their successors, continued to vie for control of a unified Haiti. In 1821, Jean-Pierre Boyer, Petion's successor, took control of the entire island, including what is now the Dominican Republic. In 1844, the eastern side of the island revolted, splitting the island along the lines that it remains in today: the nation of Haiti occupies the island's western half and the eastern half is the Dominican Republic.

Earthquakes, outbreaks of disease, political despotism, and a stagnant economy continued to afflict Haiti throughout the 19th century. Although the effects and significance of the Haitian Revolution were profound, both for Haitians and for the rest of the world, the prosperity and freedom that Haitian revolutionaries hoped for has never been fully realized.

The Haitian Revolution, which was a revolution that aimed to destroy slavery and bring about a more free society on the island of Saint-Dominique, a French colony in the Caribbean, terrified the slave-holding nations of North America and Europe. Within Haiti itself, political instability and the economic devastation that resulted from the Haitian Revolution made rebuilding the country very difficult. The short reign of Jean-Jacques Dessalines, Haiti's first post-revolutionary leader, began a tradition of autocratic rule in Haiti, which lasted well into the 20th century. Evidence of this can be seen in the construction of the Citadel on the orders of Henri Christophe. The political, ideological, and economic consequences of the Haitian Revolution were profound, including inspiring the German Coast Uprising, which was the most serious slave revolt in the United States; the Louisiana Purchase, in which the United States obtained much of the Western United States from France for a very reasonable sum; and even the eventual formation of the Dominican Republic. Despite this, Haiti struggled throughout the 19th century to establish itself as an independent nation.

After watching this video on the Haitian Revolution, you should have the confidence to:

The Spirit of 76: Lesson for Kids

How to Create a Personal Budget: Tools & Examples