Proteins are vital for healthy cells, and protein function can be negatively affected by point mutations. Learn about missense, nonsense, and silent mutations and understand the effects mutations have on the function of proteins. Updated: 08/17/2021
Create an account

What do you think of when you hear the word 'mutation'? Do you think of a vile, three-headed monster from ancient mythology? Do you think of fantastic animals with magical powers? Or, do more realistic images come to your mind? It may be entertaining to think about all the wild mutations out there. But, the truth is that most mutations are not that extreme. In biology, a mutation is any change in the nucleotide sequence of DNA. Some mutations affect large sections of DNA, and others only affect certain points along the DNA strand. These small, specific mutations are called point mutations.

We've talked before about the different kinds of point mutations. Some are base substitutions, in which a single nitrogenous base is replaced by a different one. Other point mutations are insertions and deletions. We know all about the changes that occur in point mutations. But, so what? They're just tiny alterations to a DNA strand. How can that have a significant effect on a living creature? 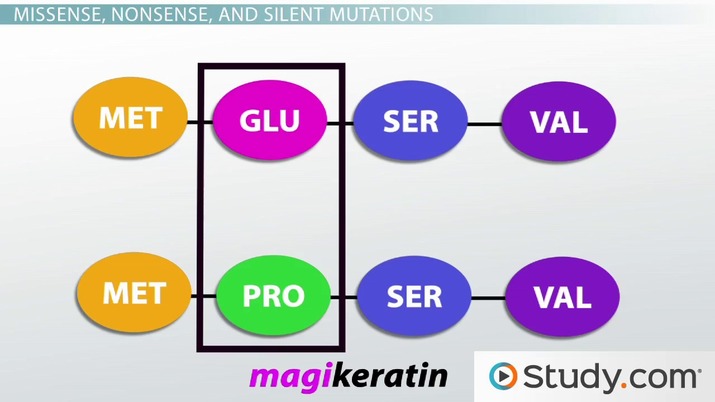 Coming up next: Mutagens: How the Environment Affects Mutation Rates

Mutations and the Central Dogma

Always keep in mind the original idea set up by the central dogma. The central dogma says that DNA makes RNA and RNA makes protein. By this point, you probably know that the code in DNA determines the code in mRNA, and the code in mRNA determines the sequence of amino acids. The amino acid chains are the basis of protein structure. So, if something goes wrong with the DNA, then the mRNA will also be wrong. If the mRNA is wrong, then the amino acid chain will be wrong. And that will cause a problem in the protein. Let's take a look at how different mutations can affect a hypothetical organism.

We'll call our organism the pink-winged pony. It's a pony, it has big pink wings, and it can fly. The feathers on its wings are made of the protein keratin. But it's a special kind of keratin that gives the pony its magical flying ability. We'll call it 'magikeratin.'

Magikeratin is a protein made of a single polypeptide, a single chain of four different amino acids. The first amino acid is methionine, the second is proline, the third one is serine and the last one is valine. They just happen to be in alphabetical order. These four amino acids must be built correctly by genetic translation. Otherwise, the pony's magikeratin won't be properly synthesized. The pink-winged pony may even lose its ability to fly!

We now know which amino acids we'll need. But how do we get them? They have to be translated from the mRNA code. The genetic code for magikeratin is AUG CCA UCA GUU UGA. The UGA is a stop codon. This code is the mRNA version of the magikeratin gene. But the mRNA came originally from DNA. To find the original DNA code, we have to use complementary base pairing. Make sure you put in the letter T instead of U, since we're going from RNA to DNA. So the original DNA code would have been TAC GGT AGT CAA ACT. This is the original gene for magikeratin. Now we've got our DNA strand, and now we can try out our own point mutations!

We're going to test a series of base substitutions. We'll first take the second G here and replace it with a T. This is a new DNA code, so it will yield a slightly different mRNA code. From our codon chart, we know that AUG codes for methionine, CAA codes for glutamine, UCA codes for serine and GUU codes for valine. And again, UGA is a stop codon. Well, it's close to our magikeratin polypeptide. But, where proline was supposed to be the second amino acid, we got glutamine instead. So, our protein is slightly off, and so are the feathers in our pink-winged pony. Oh no! Our pony has changed! He can still fly, but his wings are all spotted. He may have trouble attracting a mate. This is an example of a missense mutation. A missense mutation is a point mutation that changes a codon to indicate a different amino acid. This usually changes the polypeptide and therefore can change the function of the overall protein. We call it a missense mutation because it causes the protein to be incorrectly translated from the original gene. Our pony incorrectly received spotted wings when he was supposed to get wings of plain pink.

Let's start over and try a different base substitution. We'll switch out this G for a letter C. The resulting mRNA will be changed by one letter, so what will be the resulting polypeptide? AUG codes for methionine, CCA codes for proline and UGA codes for… wait, that's a stop codon!

So, we don't even get to keep building. We have to stop short, and now the magikeratin won't be produced at all. You know what that means? Our pink-winged pony will have to go featherless! This type of mutation is called a nonsense mutation. It's a point mutation that turns one codon into a stop codon. Nonsense mutations always result in the early termination of a polypeptide. In other words, the chain stops short, and the protein is never completed. Our pony doesn't get any feathers, and he'll never be able to fly.

Now we'll start over with a third kind of base substitution. Let's switch out the last A for a T. Just looking at the setup, can you guess which of the four amino acids will be affected by this change? That's right, the fourth one. So, we get the mRNA strand that codes for methionine, proline, serine and valine. Hold on a second; the amino acid didn't change! Why did we still get a valine at the end? Oh, even though our codon changed, it still specified a valine. See? Both GUU and GUA code for valine. A point mutation that has no overall effect on a protein's function is called a silent mutation. Sometimes a silent mutation results in the same exact sequence of amino acids. That's what happened here. Other times in a silent mutation, there is an amino acid change, but it doesn't affect the overall function of the protein. In the case of our pony, the magikeratin wouldn't be changed at all by this type of mutation. He would still have plain pink wings, and he'd still be able to fly.

Mutations in the Real World

Using the pink-winged pony was a fun way to learn about the consequences of point mutations. But in real life, point mutations are often not so fun. They can cause health disorders because they end up changing the way important proteins work. Sickle-cell anemia is one disease that is caused by a missense mutation. The mutation occurs in the hemoglobin gene. Hemoglobin is a protein that helps us carry the oxygen in our bloodstream. It also affects the shape of our red blood cells, which need to be round in order to move smoothly through our blood vessels. If someone has the missense mutation in their hemoglobin gene, their red blood cells will be sickle-shaped and won't travel well in the vessels. As a result, this person will have trouble circulating oxygen throughout their body. They'll become anemic, which is why they're diagnosed with sickle-cell anemia.

Point mutations can cause serious changes to an organism if they change the way a protein works. A mutation in DNA alters the mRNA, which in turn can alter the amino acid chain. A base substitution may have three different effects on an organism's protein. It can cause a missense mutation, which switches one amino acid in the chain for another. It can cause a nonsense mutation, which results in a shorter chain because of an early stop codon. And a base substitution can also cause a silent mutation, in which the protein's function doesn't change at all. Base substitutions are responsible for disorders like sickle-cell anemia, which is caused by a missense mutation, and Duchenne muscular dystrophy, which is caused by a nonsense mutation.

At the conclusion of this lesson, you will be able to:

Bleeding Out: ITP and Wiskott-Aldrich Syndrome