The earth is constantly rotating while revolving around the sun and this affects the earth's climate and timezones. Learn about the incoming energy from the sun, the rotation and revolution of the earth, the axis tilt, and its effect on the climate. Updated: 11/05/2021
Create an account

The sun constantly floods the Earth with radiation: light, heat, radio waves, ultraviolet waves, and all wavelengths in between. This radiation travels 92,960,000 miles, and the amount is fairly consistent, even though the sun goes through cycles of its own. But once it reaches Earth, what happens to that radiation is not actually very consistent across the planet. Case in point: some parts of Earth are cold, some are hot, and our seasons mean that different parts of the Earth are heated more or less at different times.

Even though temperature fluctuates slightly during Earth's orbit, these differences have nothing to do with our distance from the Sun. Our planet's seasons and climates can be attributed to the fact that Earth rotates in motion about its central axis and moves in orbital revolution when it travels around the Sun. 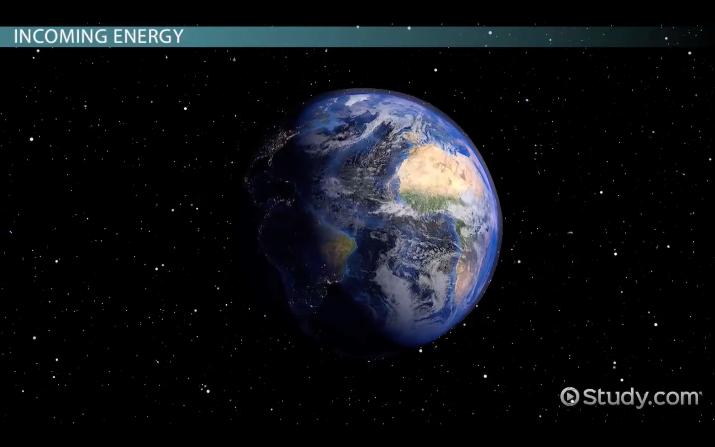 Coming up next: Solar Energy: Effects on Earth's Temperature

For much of human history, people believed Earth to be flat. We now know better. But if Earth were flat, the way we experience day and night, as well as seasons, would be vastly different than it is. For one thing, a flat Earth would experience the same temperatures across its surface; the equatorial regions would have the same temperatures as the poles. But because our planet is spherical, the amount of radiation absorbed at the equator is greater than at the poles.

There are a couple of reasons for this. First, the high angle of incoming radiation at the equator, which tapers off to be at its lowest at the poles, where the radiation hits at a lower angle. But remember that our planet is also not sitting still. It rotates about a central axis, much like a spinning toy top. One full spin happens in 24 hours and is the reason why we experience day and night. No matter where on the planet you are, you will experience some daytime and nighttime. This rotation also causes Earth's atmosphere to flatten, ever so slightly, much the same way a pizza chef can make a ball of dough flatten into a disk by spinning it in the air.

The thicker atmosphere around the equator also contributes to the higher absorption there. Combined with the high angle of radiation, this translates to year-round warm temperatures between the Tropic of Cancer to the Tropic of Capricorn, imaginary lines of latitude at 23 degrees north and south of the equator, respectively.

To add further complexity, not only does Earth spin, it spins at a slight angle. Earth has an axis tilt of about 23.4 degrees. That tilt causes differences in the amount of daylight experienced on different parts of the planet. For example, if it is summertime and you are north of the Arctic Circle, an imaginary line of latitude at 66 degrees north, you will not experience any nighttime as Earth rotates. This is because the axis is tilted towards the sun during the summer months and is why places like Alaska, Canada, and Northern Europe can be called 'land of the midnight sun.' At the same time, someone south of the Antarctic Circle, an imaginary line of latitude at 66 degrees south, would be experiencing no daylight whatsoever, enduring many weeks of darkness.

Contrary to what you may think, being tilted towards the sun and receiving nonstop daylight does not equate to dramatically warmer temperatures. It is still colder in the Arctic than it is at the equator. Remember that the angle in which solar radiation hits Earth is much lower at the poles and is very high at the equator and that the atmosphere is somewhat thicker at the equator. Light waves and infrared waves, or heat waves, are absorbed differently.

Thankfully, for its inhabitants, the Arctic Circle is not pointed at the sun year-round, and the Antarctic is not always in darkness. They actually experience the same amount of daylight and nighttime over the course of a year. But Earth's axis tilt doesn't change either. What does change is Earth's orientation relative to the Sun. While Earth spins on its axis, it is also traveling around the Sun in orbital revolution. One full orbit around the sun is about 365 Earth days, or one year. The axis tilt remains at 23.4 degrees, but depending on where Earth is in its orbit, the amount of radiation received on different parts of the planet will change.

We already discussed the summer months, and how summertime means more hours of daylight in the Northern Hemisphere and fewer hours in the Southern Hemisphere. During spring and fall months, the axis is tilted neither towards nor away from the sun, and so daylight in both hemispheres is about the same. In the winter months, the axis is pointed away from the sun, causing the Southern Hemisphere to receive more hours of daylight than the Northern Hemisphere. During this time, the Arctic experiences many days of darkness, while the Antarctic gets its due daylight. Seasons are opposite north and south of the equator and are a direct result of Earth's axis tilt combined with its orbital revolution.

The consistencies in seasonal patterns, as caused by Earth's rotation and revolution, help shape the climates, or average weather and seasonal conditions in a given part of the world. The North and South Poles are always colder than equatorial regions, and the temperate zones found in between the tropics and the polar regions tend to have mild climates. Other factors that influence the climate of a given region include proximity to water and permanent wind patterns for that area. Because of Earth's rotation, wind patterns can be fairly constant, as well as ocean surface currents that are generated by wind. Ocean and air movement play a major role in the transportation of heat across the planet.

Because of Earth's spherical shape and axis tilt, incoming radiation is not absorbed evenly across the planet, and this distribution changes with the seasons. Earth's rotation is the cause for the differences in daytime and nighttime as it spins on its axis. When that axis is tilted towards the sun, the Northern Hemisphere receives more radiation than the Southern and vice versa when the axis is tilted away from the sun. The axis tilt doesn't actually change, but its orientation relative to the Sun changes as Earth moves in orbital revolution around the Sun. This motion, combined with the axis tilt, is responsible for our seasons.

Earth's many climates are also a result of seasonal radiation consistencies, as well as wind and ocean current patterns. Earth's many motions are complex, but have shaped an amazing diversity of conditions on its beautiful surface!

When this lesson is concluded, students should be able to:

Distribution of People in Rural Settlements

The Cycle of the Seasons in Astronomy

Identifying the Continents & Oceans of the World

What is the Winter Solstice? - Definition & History