Kallie has a B.S. in Agribusiness and minor in Statistics from California Polytechnic State University, San Luis Obispo and M.S. in Agricultural and Resource Economics from University of California, Davis. She has extensive experience designing and performing economic analysis of wholesale energy markets and investigations of market participant behavior within these markets.

In this lesson, you will be introduced to the concept of an elastic demand and how to determine if the demand is elastic. Two methods will be presented along with examples.
Create an account

What Is Elastic Demand?

An elastic demand curve is one where the quantity demanded of a given good is sensitive to changes in price. For example, if airline tickets to Maui increased by 10% and the amount of people buying tickets dropped by more than 10%, then airline tickets to Maui would be considered to have an elastic demand. Compare this to if milk increased by 10%, but there was only a 2% drop in the amount of gallons sold; the change in price didn't significantly impact the amount of milk sold. More specifically, a demand curve is considered elastic if a 1% change in price results in more than a 1% change in quantity demanded.

The following image illustrates an important concept with elasticity. Elasticity is not constant along a linear line like the slope of the line. Elasticity changes as you move along the line because it all is based on percent changes. A 10% change at $1 is significantly less than a 10% change at $5. To accurately determine if a demand curve is elastic, you have to calculate the elasticity at a given price. The only elastic demand curve that has a constant elasticity is a horizontal line. 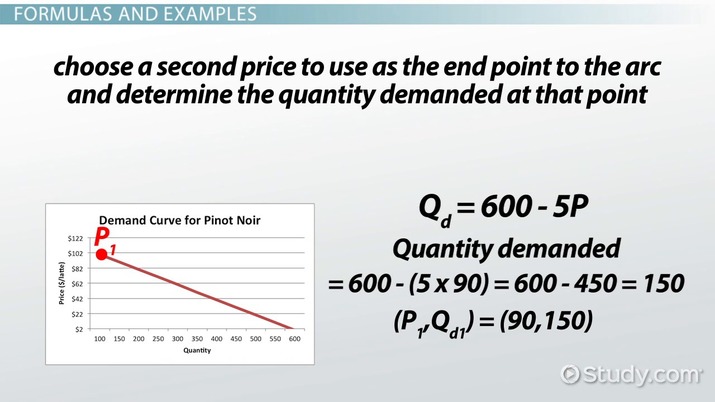 Price elasticity of demand can be calculated using the arc or price point method. We will walk through an example using both methods. Essentially, both methods are trying to determine what the change in quantity demanded will be if there is a change in price. The more sensitive, i.e. more change, in quantity demanded, the more elastic the demand curve. Think of something that you treat yourself to. If that price increases, you would probably treat yourself less often. If the price goes up 1% and you decrease the amount you buy by more than 1%, it is considered to have an elastic demand.

Using the arc method, determine the price elasticity at $90/bottle.

Given the demand equation above, first determine the quantity demanded at $90/bottle.

Now choose a second price to use as the end point to the arc and determine the quantity demanded at that point. The closer the second point is to the original price point, the less inaccurate the estimate will be. Let's pick $31/bottle as P2.

Using the formula from earlier:

At $90/bottle, Pinot Noir with this demand curve is considered elastic. Quantity demanded will decrease by 3.07% with a 1% increase in price.

Using the formula from earlier:

Let's review. An elastic demand is one that is sensitive to price change, such that the percent change in quantity demanded will be greater than the percent change in price. As seen in the price-point elasticity of demand example, elastic demand has a price elasticity more negative than negative one. The two examples also illustrate the slight difference in results when using the two methods. The arc elasticity of demand is a less precise estimation, especially when the curve is not exactly linear.

Price Elasticity of Demand in the Hospitality & Tourism Industry

How to Calculate Market Equilibrium

What is Elasticity in Economics? - Definition, Theory & Formula

Economic Scarcity and the Function of Choice