View bio
An electoral system is a way a country facilitates appointing leaders from political parties. Discover the dominance of the two-party system in the US, the logic behind electoral systems and how they are set up, and the laws that benefit the two major parties and place obstacles in the way of minority parties. Updated: 10/06/2021
Create an account

The Dominance of the Two-Party System

Two hundred years is a pretty lengthy amount of time for anything to last. It would be rare for you or I to live even half that long. But while you and I may not live for two centuries, the things we produce may.

Our two-party system, specifically the version dominated by the Democratic and Republican parties, will most likely continue to outlive us for some time. It has already existed for some 200 plus years. How then have the two parties been able to remain so dominant?

One of the reasons why two major parties have retained most of the power in the United States is because of our country's reliance on a winner-take-all electoral system, which is also known as a plurality electoral system. At virtually every level of government in the United States, the outcome of elections is based on the person who obtains the most votes, even if that person didn't receive a majority of the votes.

How can you get the most votes but not a majority? A majority is defined as 50% plus 1. If there are three candidates, one candidate could get 40% of the votes while the other two only get 30% each, in which case the first candidate would win without a majority. In other words, whoever gets the most votes gets everything. 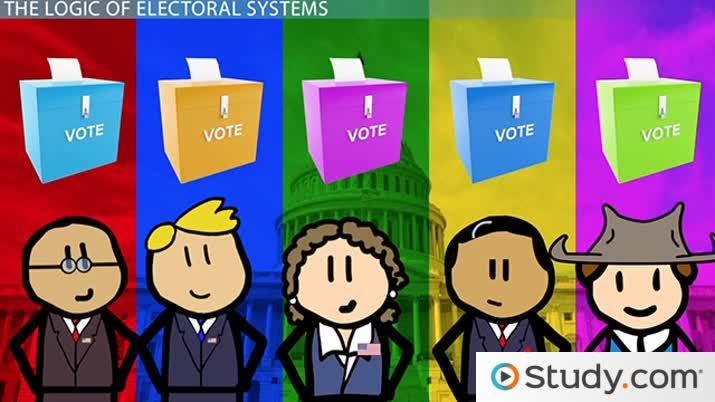 Coming up next: Nominating a Presidential Candidate: The Process & Its Strengths & Weaknesses

How Electoral Systems Are Set Up

In a plurality system, only those candidates who finish at the top are declared the winners and are awarded with representation in the government, while losing contenders are left on the outside. By their very nature, plurality electoral systems encourage two-party governments.

But not all political systems work this way. Imagine you are playing the lottery. Of course, you would feel much better about your chances if it was only you and one other person playing versus being one among many other people. However, some people might want to hedge their bets and play against many competitors rather than risk the finality of a winner-take-all scenario. In other words, they would prefer to play the version of a lottery that rewards you even a little bit even if you don't get all the numbers, because at least you won something.

The Logic of Electoral Systems

But because the United States has a plurality electoral system, a certain logic is set up in the minds of politicians and voters against the presence of third parties. For example, politicians know that a winner-take-all scenario presents little chance for small parties to win, so they form broad coalitions and gather diverse constituencies, or voter support and interests, within one party. Politicians, in other words, want to appeal to the greatest number of people as possible to increase their probability of winning because they know that there is no award for second place.

Similarly, voters do not like to waste their vote on likely losers, so in a plurality electoral system, voters will throw their support behind the most viable candidates rather than support smaller parties with little chance of success, even if they feel that the smaller parties better represent their values.

However, in a proportional representation electoral system, there is an incentive to form parties based on specific ideologies or common interests. This is because politicians in these systems want to appeal to their strongest voter bases, because even a small share of the vote can be rewarded with legislative representation. Being a voter in a proportional representation system also leads to a different mindset because, in this type of system, a voter can feel free to vote based on their ideologies and interests and won't feel like they are throwing away their vote for a candidate who has little chance of winning.

Many U.S. state and federal election laws also offer a clear advantage to the two major parties. In some states, the established parties don't need to gather as many signatures to place their candidates on the ballot as minor parties or independent candidates do. The criterion for determining how many signatures is required is often based on total party vote in the last general election, thus penalizing a new political party that did not compete in that election.

The national system also places obstacles in the way of minority parties. For example, all of the rules and procedures of both the House of Representatives and Senate divide committee seats, staff members, and other privileges on the basis of party membership. If a minority party candidate should win an election, he or she still must choose to be counted with one of the major parties to obtain a committee assignment. This can lead to minor party candidates compromising their political identities, which can hurt them in the next general election.

The winner-take-all electoral system of the United States clearly makes it advantageous for a two-party system to remain in power, both because of how legislative seats are assigned and because of how politicians, voters, and laws perpetuate their dominance and penalize smaller parties. While a proportional representation electoral system still allows for competition, it also gives politicians and voters more opportunity to maintain their political ideologies.

Use this video lesson to strengthen your ability to:

Prompts About Electoral and Party Systems:

Create a poster, chart, or some other type of graphic organizer that depicts the differences between a plurality electoral system and a proportional representation electoral system.

Example: The plurality electoral system is a winner-take-all one.

Make a poster, chart, or some other type of graphic organizer that illustrates the concepts of most votes versus majority of votes.

Tip: Make up some data to work with so your graphic organizer can use numbers to illustrate these concepts.

Write an essay of approximately two to three paragraphs that explains how and why plurality electoral systems encourage two-party systems.

Example: The candidates who finish at the top are those that win positions, so larger political parties tend to shut out smaller ones.

In at least three to four paragraphs, write an essay that describes the logic behind plurality electoral systems and the two-party system. Be sure to address the role of constituencies in the electoral system.

Example: The two-party system allows each candidate to appeal to the widest swath of voters, even if their viewpoints do not align precisely on every issue with every constituent.

Write an essay of approximately three to four paragraphs that explains the laws and regulations in place that encourage the use of the two-party system in the United States.

Example: Even if a third party candidate wins an election, he or she still has to choose one of two parties in order to be assigned on congressional committees.

Types of Political Regimes & Their Characteristics