Electric motors are defined as anything that converts electrical energy into mechanical or kinetic energy. Learn how electric motors work and review some examples of how they are used in everyday life. Updated: 11/02/2021
Create an account

What Is an Electric Motor?

Have you ever wondered how it is that we have devices that can turn electricity into motion? How does your ceiling fan turn or your food processor...process?

Anything that turns electricity into motion, meaning electrical energy into mechanical energy, is called an electric motor. 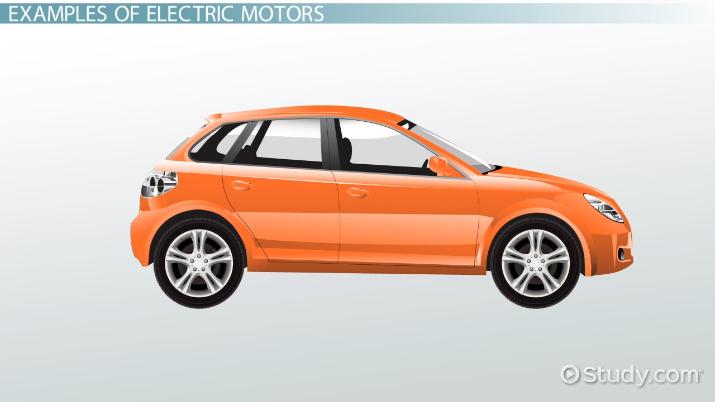 How Do Electric Motors Work?

An electric motor contains a coil of wire (sometimes called a solenoid) that creates a magnetic field when electricity flows through it. This is collectively known as an electromagnet.

Then, a current is sent through a loop of wire positioned inside this electromagnet's magnetic field.

It turns out that when a current flows through a magnetic field, the charges feel a magnetic force on them at 90 degrees to the direction they're moving. Because of this, the wire as a whole feels a big force. And this force causes the loop of wire to move; electrical energy has been changed into movement.

If we look at a diagram of the loop of wire inside the magnetic field, we'll see that sides B and D have currents flowing in opposite directions. Because of this, the magnetic forces they feel also go in opposite directions. Side B feels a force into the page, and side D feels a force out of the page. These two forces together cause the loop of wire to rotate.

This rotation is the basis for most electric motors that involve turning motions.

An electric car has an electric motor. The energy stored in the car's batteries is converted into the rotation of the wheels.

A food processor works on exactly the same principle. Electrical energy from the outlet is turned into rotation in the food processor, and if you attach blades to the part that turns, it can cut up your food.

Even an elevator works on the same principles. In the case of an elevator, the final motion isn't rotation, but it's still based on electrical wires feeling forces inside magnetic fields.

An electric motor is a device that turns electrical energy into motion, usually rotation. It changes electrical energy into mechanical energy or kinetic energy (kinetic energy means movement). This works using electromagnetism. A loop of wire containing a current is passed through an electromagnet's magnetic field. This motion of charges inside an external magnetic field creates a force on those charges at 90 degrees to the direction they're moving. Because of this, one side of the loop feels a force one way and the other side of the loop feels a force the opposite way. This causes the wire loop to rotate.

If this rotation is attached to an axle, it can be used to do a lot of useful things. In a car, an electric motor turns the wheel of the car. In a food processor, it turns the blades around to cut up your food. And in an elevator, a different kind of electric motor causes the elevator to go up. But whatever the kind of motor, it all works by putting a current through an external magnetic field to create a force.

The purpose of this lesson on electric motors is to help you as you prepare to do these things:

How Does an Electric Generator Work? - Lesson for Kids

Refracting vs. Reflecting Telescope Overview & Parts | What Are Telescope Parts?

Inductor Formula, Current & Unit | What is an Inductor?