View bio
An electrocardiogram (ECG) records the flow of electrical current on three distinct waves. Explore the purpose of an ECG, the three wave types, and the purpose of each wave on an ECG. Updated: 08/23/2021
Create an account

Your heart is a very unique muscle because it has the ability to create electrical impulses on its own without any outside influences. This ability is thanks to the built-in regulating system called the intrinsic conduction system. We previously learned that the electrical impulse begins at the pacemaker of your heart, which we call the SA node. Then the impulse travels through the atria to the AV node, and then down through the ventricles, causing the heart to beat in a rhythmic and predictable way. 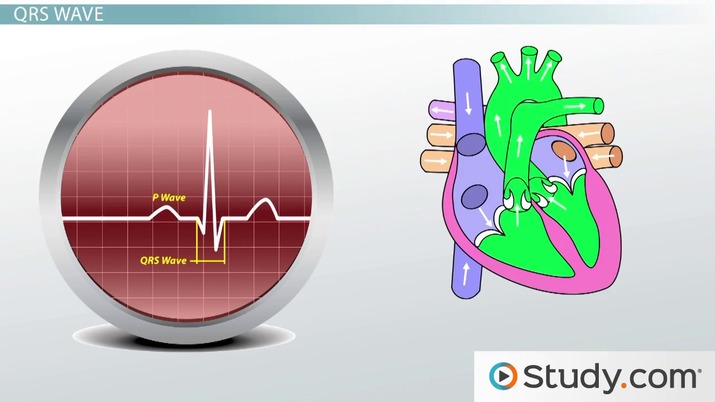 Coming up next: Arrhythmia of the Heart: Terms, Definition & ECG Detection

When this electrical impulse passes through your heart, electrical currents are created that spread through your body and reach the surface of your skin. Now, you don't feel these impulses, but they can be picked up and graphed as an electrocardiogram or ECG, which is simply a recording of the flow of the electrical current through the heart. This is a common test used to detect problems in the heart. You've probably seen one if you've ever watched a television drama based in a hospital, because when one of your favorite characters 'flatlined,' that meant that the ECG was no longer detecting an electrical charge, and you heard that familiar flatline 'beeeeep' of the ECG monitor.

An ECG is performed by placing electrodes on the skin overlying the heart. As the electrical impulse moves from the atria, which are the top two chambers, to the ventricles down below, the voltage measurement between the electrodes varies, and this produces a graph of how your heart is performing. This provides the person running the test with valuable information based on the intensity of the heart's contractions and the time intervals between those contractions.

In a normal ECG, there's three distinct waves. Together these waves represent one heartbeat. Looked at separately, the waves tell us what's happening in the heart at a certain time. The first wave is called the P wave. You can see from this picture that it's a relatively small wave. It represents the depolarization of the atria. What does that mean? Well, we remember that depolarization is defined as the change in the cell's membrane potential to a more positive state. It's this change that generates the electrical impulse that starts the heart's contraction. So we can associate the P wave of an ECG with the contraction of the atria.

If we move along the graph of the ECG, we see a small dip followed by a large spike and another dip. This series is usually considered together, and it's called the QRS wave. You'll notice that this puts the waves in alphabetical order. The QRS wave is sometimes called the QRS complex, and it represents the depolarization of the ventricles. This quickly leads to the contraction of the ventricles and ejection of blood out of the heart and into the large arteries exiting the heart.

One thing you probably noticed is that the P wave is much smaller than the QRS wave. You can use this fact to help remember what's happening during the waves. If you recall, the atria are the smaller two chambers of the heart, and they don't contract quite as strong; therefore, the P wave is smaller. In contrast, the ventricles are the muscular pumps of the heart, and the QRS wave represents their depolarization - it is much larger of a wave.

After the QRS complex, we see another small peak, and this is called the T wave. The T wave represents the repolarization of the ventricles. We know that repolarization is the opposite of depolarization and refers to the change of the membrane potential that returns the membrane back to a negative value.

We might want to think about this as a return back to the resting state or relaxation phase of the ventricles. We learned previously that that's called diastole. This means that the ventricles are relaxed and under less pressure. This causes the semilunar valves to close, so the second heart sound, 'dub,' happens shortly after the T wave appears on the ECG.

Let's review. The electrocardiogram or ECG is a test that records the electrical activity of your heart. It can detect the electrical impulses that move through the heart, providing a graphic tracing of how your heart is performing.

In a normal ECG, there's three distinct waves. The first wave is the P wave, which represents the depolarization of the atria. This happens right before the atria contract and push blood into the ventricles.

The T wave comes next, and this represents the repolarization of the ventricles. This returns the ventricles to a resting state, or diastole. At this time, the semilunar valves close. This causes the second heart sound, 'dub.'

After seeing this video lesson, you will be able to:

Make Your Own ECG

In this activity students will create their own electrocardiogram waves and then analyse the waves to identify each wave type.

Detecting a Heart Attack with an EKG

What Is a Blastocyst? - Definition & Development Stages