Even technically perfect music can get a little dry at times. In this lesson, we'll look at one way to add a bit of ornamentation to help keep your compositions lively. Updated: 05/30/2020
Create an account

Why do we decorate Christmas trees? Apart from the symbolism of various ornaments, the simple fact is that a plain tree is boring. The ornaments make it a little more visually fun.

Music really isn't that different. Many composers throughout history have found that they created compelling melodies, supported by technically perfect harmonies, but that the composition was still missing something: a bit of flair. So we have ways to add a little ornamentation.

One of these is an embellishing tone, a note added to ornament the harmonic progression of chords. Embellishing tones tend to be outside of the vertical triad of the chord, so they're also called non-chord tones. For example, the triad of a C major chord would be CEG, right? Well, if you played an F, that's a note outside the chord. It's a little something extra that grabs your attention and embellishes the composition. Sometimes music, like trees, just needs a little ornamentation.

There are many kinds of embellishing tones, so let's start with one of the most common: passing tones. Passing tones are embellishments that occur between two chord triads, moving in a stepwise direction. This means that the passing tone is higher than the first chord but then lower than the note it resolves into in the second chord.

In technical terms, we call this a stepwise motion. A step is an interval of a second (so A to B, for example). So from our first chord, we take one step up or down into the passing tone, and then one more step in the same direction into the next stable chord triad. Most passing tones happen in between two chords (what we call an unaccented tone), but they can also occur as part of the second chord. Since it's on a stronger beat, an embellishing tone that does this can be said to be accented. 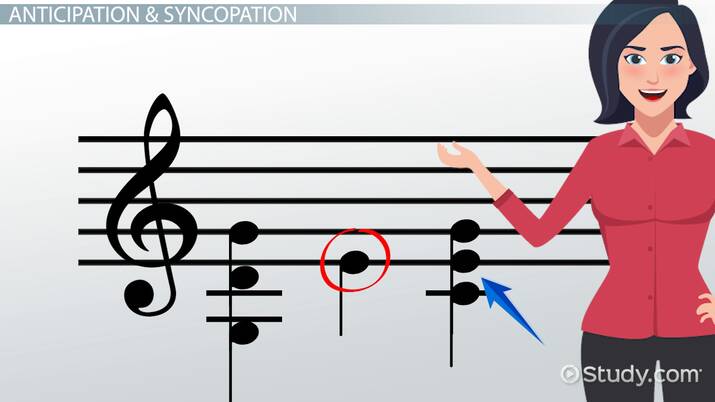 So far, all our embellishing tones are approached by a step, and resolve with a step. That's not always going to be the case. An escape tone is approached by a step either up or down but resolves into the second chord with a skip or leap in the opposite direction. Skip or leap can be used interchangeably; they just mean that the embellishing tone moves away from the note in the triad by an interval of a third or more (A to C would be an interval of a third, for example). Escape tones can't be accented, so they have to occur between two chords.

Something of a variation on the anticipation is syncopation, a rhythmic device in which a normally strong beat is played on a weak beat. Basically, the goal is to make it feel like the entire beat came early, not just one note. So syncopation can be created in a similar way to anticipation by playing a note from the second chord early. The difference is that with anticipation, the note is played again as part of the actual chord; it's clearly a single early note. Syncopation is linked to the second chord with a tie (which is like a slur but connects two notes of the same pitch). This means that it's not an individual note that arrives early but a piece of the chord that arrives early.

An anticipation plays a tone too early, before the chord it belongs to. We can also apply the opposite, letting tones linger beyond their chord. If the embellishing tone is a note from the first chord that lingers into the second chord and then steps downwards, it's called a suspension. A retardation happens when a note from the first chord is maintained into the second and resolves with a step up. Both words indicate something sustained or drawn out. Suspensions and retardations are both accented to add a little extra drama and dissonance to the second chord before resolving.

Sometimes, even the best compositions could use a little ornamentation to keep them interesting. This can often be achieved with embellishing tones (also called non-chord tones), notes played outside of the normal chord structure. Here are some common ones:

In your compositions, try experimenting with some of these embellishing tones. You might just find that your music lights up like a Christmas tree.

What Is a Tetrachord? - Definition & Examples