According to the theory of Emile Durkheim, a sociologist, society functions based on the division of labor and the equilibrium of social hierarchies. Learn about the theories of Durkheim on the social concepts of functionalism, anomie, and division of labor. Updated: 08/23/2021
Create an account

Emile Durkheim was a well-known sociologist famous for his views on the structure of society. His work focused on how traditional and modern societies evolved and function. Durkheim's theories were founded on the concept of social facts, defined as the norms, values, and structures of society.

This perspective of society differed from other sociologists of his era as Durkheim's theories were founded on things external in nature, as opposed to those internal in nature, such as the motivations and desires of individuals. According to Durkheim, collective consciousness, values, and rules are critical to a functional society. In this lesson, we will focus on Durkheim's theories of functionalism, anomie, and division of labor. 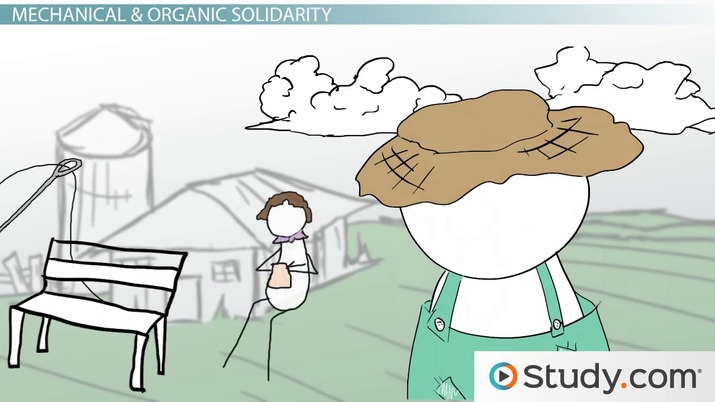 Functionalism emphasizes a societal equilibrium. If something happens to disrupt the order and the flow of the system, society must adjust to achieve a stable state. According to Durkheim, society should be analyzed and described in terms of functions. Society is a system of interrelated parts where no one part can function without the other. These parts make up the whole of society. If one part changes, it has an impact on society as a whole.

Let's look at this example again. The state provides public education for children. But a disruption or disequilibrium in the system occurs - perhaps the education is subpar, and the children drop out and become criminals. The system adjusts to improve the education and attempts to rehabilitate (through jail or other means) the criminals for them to become law-abiding and taxpaying citizens.

Durkheim actually viewed crime and delinquent behavior as a normal and necessary occurrence in the social system. He proposed that crime led to reactions from society about the crime. These shared reactions were used to create common consensuses of what individuals felt were moral and ethical norms by which to abide. These commonly held norms and values led to boundaries and rules for the society.

Durkheim's concept of the division of labor focused on the shift in societies from a simple society to one that is more complex. He argued that traditional societies were made up of homogenous people that were more or less the same in terms of values, religious beliefs, and backgrounds. Modern societies, in contrast, are made up of a complex division of labor, beliefs, and backgrounds.

Mechanical solidarity occurs when individuals within structural units are alike and self-sufficient. For example, in traditional societies, people grew their own food, made their own clothes, and had little need for extensive social contact with others because they did not have to rely on others for daily needs.

Organic solidarity is when a large population is stratified into smaller structural units. There's a high level of interdependence among individuals and structures, but there's still a division of people along the lines of labor or type.

Durkheim recognized that things like increased communication, transportation, and interaction with others resulted in the social change from a mechanical solidarity to organic. If societies evolve too quickly from traditional to modern, a breakdown of norms and collective consciousness occurs. The concept of community and social constraints becomes weakened, and this leads to disorder, crisis, and anomie.

The concept of anomie refers to a condition or state in which there is a breakdown of social norms and guidance for the citizens of society. Anomie occurs when society has little influence on individuals' propensity to follow the rules and norms, and individuals are, therefore, left without moral guidance. Individuals do not feel attached to the collective society.

According to Durkheim, anomie is caused by the division of labor and rapid social change from traditional to modern society. Anomie causes the feelings of alienation among individuals because they feel like their only attachment is to the system in which they don't believe, or they don't feel a part of it. It also causes feelings of frustration and a sense of deprivation.

Emile Durkheim developed theories of social structure that included functionalism, the division of labor, and anomie. These theories were founded on the concept of social facts, or societal norms, values, and structures.

Functionalism is a concept with three integral elements. First, it is a society made up of interrelated parts. Those parts form a whole, normal state of society. When there is a disturbance to normalcy, the interrelated parts work to reorganize and create a sense of equilibrium once more.

Anomie is the state in which there is a breakdown of social norms and guidance. Anomie is caused by the division of labor and rapid social change from traditional to modern society. It causes feelings of isolation, frustration, and social deprivation among individuals. Durkheim noted that higher or lower than normal feelings of social integration might result in suicide.

The Sociological Theories of Emile Durkheim

The Sociological Theories of Karl Marx

Max Weber: Verstehen and the Rationalization of Society