For much of the 19th century in Britain, social class was extremely important. In this lesson, we'll take a look at the social classes of that period, also referred to as the Victorian era.
Create an account

When you read about class systems, chances are you think back to the ancients. People often think about the division of people in an unfair class structure as something that happened thousands of years ago. However, class systems have existed in the Western world relatively recently, and one of the most stratified class systems in human history existed just a couple of centuries ago. 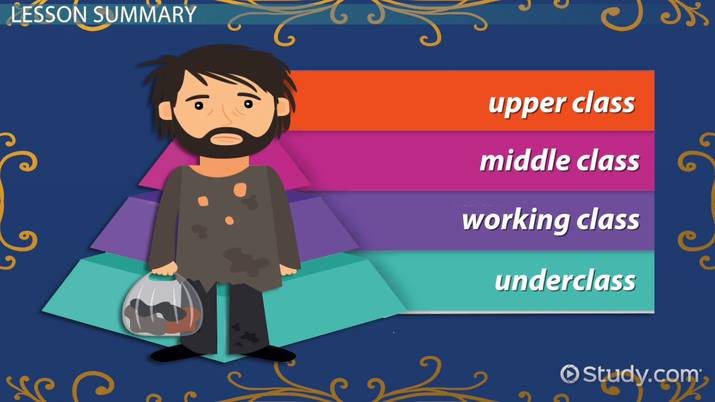 Coming up next: The Estates General Meeting and the French Revolution

At the top of British Victorian society were the royal family and nobility, and they did not have to work since their money came from inheritance, land, and investments. But this top tier of the class system wasn't composed only of people born into their status. The Victorian period was a time of great advances in industry and commerce, which meant great advances in wealth. Much of this wealth was concentrated into the hands of a few very successful people. These ultra-rich tycoons became a class of their own that rivaled the kings and dukes for preeminence.

So, there were two routes to the upper class in the Victorian era: be born into it or make enough money to buy into it.

The vast majority of people were part of the working class. This is the class that many of us think about when we try to envision the darker side of Victorian life. Many of Charles Dickens' characters, for example, find themselves in the working class. They worked 12-hour days in factories, acted as servants in wealthy or middle class households, where they were expected to be seen and not heard, and endured the brunt of the cost of progress during the Industrial Revolution.

While many people might think the working class is at the bottom of the class structure, there was actually a lower level of the social structure in Victorian Britain. The underclass consisted of people who were so poor they were essentially debilitated, being constantly hungry, weak, and too poor and dirty to even be considered for work. They relied mostly on charity and were typically homeless. Prostitutes also comprised the underclass. Even prostitutes who made enough money to live comfortably were considered the worst of the worst and remained at the bottom of society.

Victorian Britain refers to the era spanning much of the 19th century and was named for the reigning Queen Victoria. At the top was the upper class, made up of royalty, nobility, and tycoons. Below them was the middle class, or people who lived fairly comfortable lives, often with their own maids, butlers, and other domestic servants. Below the middle class sat the working class, which made up the bulk of the population and spent their lives working long hours just to get by. At the very bottom of the social structure were the underclass, consisting of the extremely poor and prostitutes.

What Is the Regency Period? - Definition & Characteristics

Symbolism in A Christmas Carol

Fezziwig in A Christmas Carol

Crooks in Of Mice and Men: Dream, Loneliness & Quotes

The Class System in the French Revolution