Entropy is the state of disorder or randomness of a system. Learn more about entropy and understand how to use the entropy equation through the example calculation. Updated: 10/27/2021
Create an account

Is it easier to make a mess or clean it up? That might seem like an odd question, and a pretty easy one to answer. But the answer to that question says a lot about how the universe works.

Entropy is disorder in the universe, measured in Joules per Kelvin. It's like the messiness of the universe. One consequence of the second law of thermodynamics is that entropy in the universe always increases. The best you could ever do is to keep the entropy of the universe the same, and even that would require a perfect, reversible process. That just doesn't happen in the real world. So, for all practical purposes, whatever you do will make the universe more disorderly.

Let's say I take a huge box of toy blocks. The bright-colored kind with the letters of the alphabet on one side, numbers on another, and a few pictures and symbols on the rest. Inside the box, they're neatly packed and in order. Then, I decide to pour them all over the floor. I have clearly just increased the entropy, the disorder in the universe. But then I pick them all up and put them back into the box, putting them all back in order. Great - so I've just broken the second law of thermodynamics and made the universe more orderly, right?

Well, not really. It was much harder to put the blocks back in order than it was to make the mess in the first place. While I was putting them back in the box, I was using energy in my muscles. When you do that, your muscles get hot, and thermal energy spreads out from your muscles to your body and eventually the outside world. The disorder created by that process is greater than the order you create by putting the blocks back. So, unfortunately, it's all for nothing.

You can never really decrease the entropy in the universe. We're doomed to witness the universe get more and more disorderly as it expands - energy spreading out forever and ever until it becomes a dark, low energy, terribly depressing place. 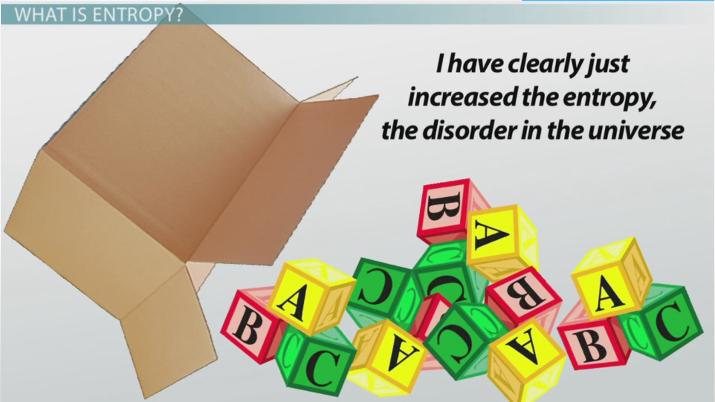 Coming up next: Heat Engines & Efficiency

If you want to learn more about entropy, you can check out another video lesson on the topic. But, in this lesson, we're going to talk about how to do some entropy calculations.

A few important things to note about this equation: since it's an energy divided by a temperature, that means your answer for the change in entropy will have the units Joules per Kelvin (Joules divided by Kelvin), and the temperature you plug in really does have to be Kelvin - if you plug in Celsius this equation won't work.

If we know where a real-life system started, and we know where it ended, we can calculate the entropy change for a reversible process with the same start and end points, and the number will be exactly the same. It's like following a treasure map. In the end, it doesn't really matter how you get there, as long as you find the treasure. The result is the same.

Let's say that 5,000 J of heat transfers between them over a short time, but because the bucket and the ice pack are so large, it hasn't yet changed the temperature of either object. And you're asked to calculate the total change in entropy in the universe due to the 5,000 J transfer.

Okay, let's try to solve this. Well, first of all, this is an irreversible process. But, as it turns out, that doesn't really matter: the entropy change in the universe will be the same for a reversible and irreversible process, as long as we know the starting and ending conditions, which we do.

There are two objects here, a hot object and a cold object, so we'll need to calculate the entropy change of each and add them up. Let's do the bucket of hot water first. The change in entropy is equal to Q over T, which is -5,000 Joules divided by 350 Kelvin. It's -5,000 Joules, because the bucket of hot water is losing energy. Divide the two numbers and you'll get -14.3 Joules per Kelvin.

Next, we have to do the calculation for the ice pack. The change in entropy is again equal to Q over T, which is 5,000 Joules divided by 250 Kelvin. Here, the 5,000 Joules is positive because the ice pack is gaining energy. That comes out as +20 Joules per Kelvin.

When doing calculations of the total entropy change of the universe, or a system with multiple objects, you can calculate the entropy change for each object individually, and then add them up. Just make sure you get your signs right!

When you have finished, you should be able to:

Entropy in Chemistry Concept & Law | What is Entropy?

What is Capacitance? | Capacitors, Equation, & Examples