Giulietta has taught college students, graduate students and researchers in scientific topics from genomics to biochemistry. She has a PhD in Molecular and Cell Biology.

Epistasis occurs when one gene affects the outcome, or phenotype, of another gene. We'll look at three examples in this lesson: hair color, albinism, and Alzheimer's disease.
Create an account

Often when we learn about genes, a simple model is described. One gene is said to be a recipe that codes for one feature (phenotype). We can make an analogy to a baker baking: one baker makes one cake.

Epistasis describes the phenomenon when one gene affects the phenotype of another gene. Sometimes, despite what one gene says, another gene might come in and change things, like a second baker adding or subtracting from the first baker's recipe to make a totally different cake. 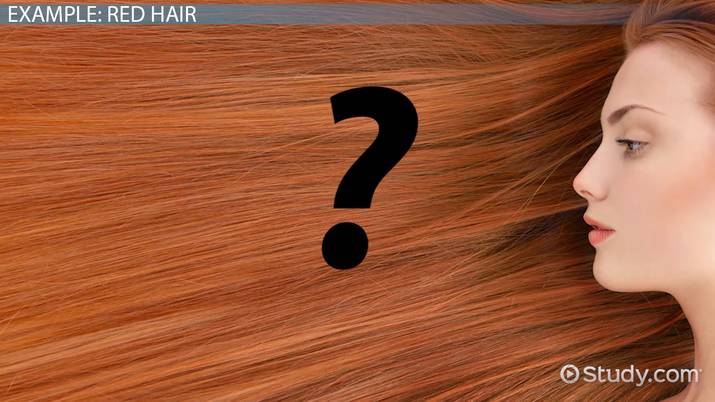 Coming up next: Types of Epistasis

Let's look at the example of red hair color in human beings. Blond, brown, and black hair in humans is determined by the amount of a pigment called eumelanin. Without much eumelanin, you get blond hair; an intermediate amount will be brown; a lot will get you black hair. A second pigment called pheomelanin makes red hair. But usually people don't build up a lot of that because of a totally different gene called MCR1.

Let's go back to our baking analogy. Let's say our baker Jacques has three differently shaped icing tips to make hearts, flowers, and stars out of icing. However, the second baker, Michel, blocks Jacques from using the flowers and heart icing tips, so Jacques simply covers the cake in stars alone.

Albinism, a lack of pigment resulting in pale, white individuals, is another example of epistasis. The albino condition occurs due to an entirely different gene than the genes that encode skin color and tone. If the albinism gene is present, the organism will not have any pigment, no matter what skin color is encoded by other genes.

An important protein named tyrosinase is necessary for the production of the pigment melanin. A gene named TYR codes for tyrosinase. However, a variation of the TYR gene has a mutation that codes for a non-functional tyrosinase that doesn't work. If a person only has non-functional tyrosinase, then no melanin will be made in the body. Even though that person's genetic code might have genes for dark skin, if there is no pigment to make it with, the person will be an albino.

It's a bit like the second baker Michel stuffing all the food coloring bottles with cotton so no liquid could come out. Jacque makes a cake and the recipe says to add red dye to white icing in order to make pink roses. However, there is no red dye available, so the roses remain white.

Epistasis can be a factor in disease. For example, people with Alzheimer's disease tend to have a very severe form of the disease when they also have a certain apolipoprotein E4 (APOE) gene sequence. The APOE gene sequence somehow worsens the disease. This would be like if Jacques already had two incorrect ingredients in his recipe, and Michel made it worse by mixing and contaminating even more ingredients in the kitchen, resulting in an inedible cake.

Other Definitions of Epistasis

This lesson presents the classic, traditional definition of epistasis. However, as genes and their interactions are revealed to be more and more complex, the definition of epistasis has become contentious. Some would define epistasis as any time multiple genes affect one phenotype. In fact, this happens all the time. It turns out it's common to have multiple bakers working on one cake. So keep in mind that many single phenotypes are determined by a network of genes and gene products.

Epistasis is the phenomenon where one gene affects the phenotype of another gene. Red hair is due to a gene that is separate from genes that code for brown, blond, and black hair color. In the same way, albinism, which is a lack of pigment resulting in pale, white individuals, is due to a mutation in the TYR gene which codes for tyrosinase, which is necessary for the production of the pigment melanin, which prevents any pigment made in the body, despite what other skin color genes code for. An increased severity of Alzheimer's disease is thought to be due to the APOE gene. Red hair, albinism, and this disease severity are all examples of epistasis in humans.