The Equal Protection Clause is included within the Fourteenth Amendment and provides that no state shall deny to any person within its jurisdiction the equal protection of the laws. The intent of the Bill of Rights was to extend to individuals protections from the United States federal government. Therefore, the states, in some circumstances, had different levels of protections for individuals from those offered via the federal government.

The Fourteenth Amendment was enacted to apply all of the rights included within the Bill of Rights and other amendments to the states and was done under the premise that everyone deserved equal protections under the laws regardless of where they lived or what color of skin they had. The initial push for the creation of the clause was to support and enforce the Civil Rights Act of 1866. The Civil Rights Act of 1866 guaranteed to all citizens the rights that had already been extended to white citizens.

In 1866, since the states did not have many restrictions placed on them by the United States Constitution, the federal government had concerns that the states would not comply with the act without some sort of constitutional backing. Therefore, the Equal Protection Clause was created in order to validate and help enforce the act by applying the Constitution to the states. 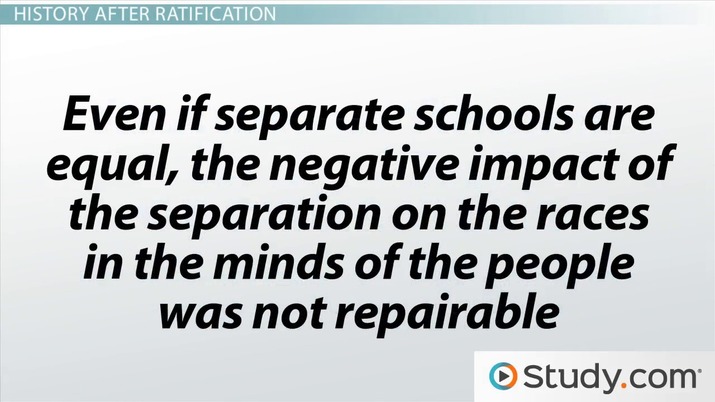 After the clause was ratified, or made a law by Congress, all of the amendments were applied to the states in an effort to legally force the states to treat people equally. Therefore, states who were still attempting to pass state legislation to prevent different minority groups from voting (or any of the other amendments as time passed) had to stop.

Plessy v. Ferguson, the U.S. Supreme Court case that memorialized the 'separate but equal' doctrine, was decided in 1896. This case upheld laws that enforced segregation in schools, modes of transportation and commercial establishments. The Supreme Court decided that this was not covered under the guise of the Equal Protection Clause. This segregation, or separation, was constitutional so long as both were equal.

This 'separate but equal' standard was law until it was challenged again in Brown v. Board of Education of Topeka, Kansas, which held that even if separate schools are equal, the negative impact of the separation on the races in the minds of the people was not repairable. Brown, having interpreted the Equal Protection Clause differently, replaced Plessy, and thereafter schools were to be desegregated. Eventually, the Equal Protection Clause was interpreted by the courts to protect voting rights of all citizens, statutes involving housing and individuals seeking higher education.

The Equal Protection Clause in the 20th century was used to prevent discrimination on the basis of gender, sexual orientation or disability. For example, a city cannot deny a permit to a company to build a group home on a property merely because it is a group home for people with developmental disabilities. Additionally, several laws that had the impact of discriminating against people on the basis of their sexual orientation without any rational reason have been struck down by the courts as well because they violate the clause.

Affirmative action, the consideration of race or gender to benefit a minority group or a group that has been discriminated against in the past, has been protected by the Equal Protection Clause. One example of where affirmative action historically has been upheld is in the case of higher education. The courts decided that in order to correct past injustices, colleges were allowed to use race as a consideration in their admission policies. Why is this important? One reason is that many African Americans did not have the ability to attend college a century ago. Therefore, in order to attempt a balance, colleges may want to accept more African Americans.

The Equal Protection Clause of the Fourteenth Amendment continues to be interpreted by courts across the United States every day. The fact that it continues to be a hot topic in the media and in the courts is a testament to the importance of the clause to the public today, just as it was at the time of its initial creation.

The Equal Protection Clause provides that no state shall deny to any person within its jurisdiction the equal protection of the laws. One of the main rationales for the creation of the clause was to support and enforce the Civil Rights Act of 1866. The federal government had a concern about the states complying with the act without some sort of constitutional backing. Therefore, the Equal Protection Clause was created in order to validate and help enforce the act by applying the Constitution to the states.

A comprehensive review of the information in this lesson might prepare you to:

The Equal Protection Clause in the Fifth and Fourteenth Amendments

The 3 Levels of the Federal Court System: Structure and Organization