Damien has a master's degree in physics and has taught physics lab to college students.

Equilibrium is the state of being balanced physically, and it is an important factor for being in motion. Explore the relationship between motion and equilibrium, focusing on the two types: translational and rotational. Updated: 10/28/2021
Create an account

If you have ever suffered from an illness that caused dizziness, or even just stood up too fast after sitting for a long time, you might have heard someone tell you that you lost your equilibrium. When your body is in equilibrium, it is in a state of being physically balanced, and losing it causes you to feel dizzy. In physics, we also use the term equilibrium when talking about balance.

Translational motion happens when a body moves from one point to another. When you get up and travel from home to school or work, your body is experiencing translational motion since it is moving between two points. Rotational motion occurs when a rigid body revolves around an axis. Examples of rotational motion would be a ceiling fan turning or a wheel spinning. We'll look at both types of motion and learn about the states of equilibrium associated with them. 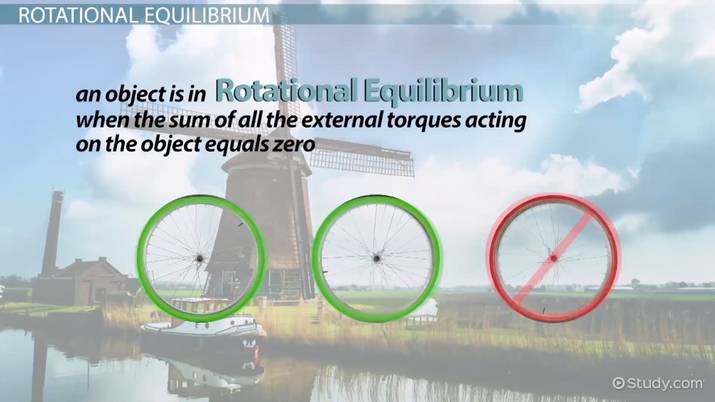 Try it now
Back
Coming up next: Stability & Center of Gravity

If we can tell that an object is in translational equilibrium, we can use this to help find all the forces affecting that object. Imagine trying to push a 20-kilogram box along the floor. You push with an applied force of 200 Newtons, but the box doesn't budge an inch. Since our box isn't moving, it must be in translational equilibrium. Using the info given, let's find all the forces acting on the box.

Now we just need to find the normal and frictional forces. To do this we are going to create two separate equations. In 2D we can split our forces up into those acting in the x direction (horizontally) and those acting in the y direction (vertically). The sum of the horizontal forces alone, and the sum of the vertical forces alone, both must equal zero since the box is in translational equilibrium.

Next, we'll find the normal force.

The negative signs make sense because they show that the force due to gravity and the frictional force are acting in opposite directions from the normal force and applied force respectively.

When an object is in rotational equilibrium, we can use the fact that the sum of the torques must be zero to find the different individual forces acting on that object. One example for this is a beam balancing at its center on a fulcrum with two weights at either end. Each weight produces a torque on the beam that tries to rotate it around the fulcrum. The beam won't create any torque by itself as long as it is balanced with its center of mass on the fulcrum. So, the sum of the torques from weight 1 and weight 2 must equal zero.

Since we know that torque is a force times a distance, we have enough information to find the force due to gravity of weight 2.