Escherichia coli, better known as E. coli, is a mammalian gut bacteria frequently used by scientists as a model organism or host cell to research biological phenomena with the intention of applying discoveries to other biological species. Explore the past and present of E.coli outbreaks, implications of genetic manipulation, and how model organisms assist with biological research. Updated: 08/31/2021
Create an account

If you had to guess, what would you say is the most studied and well-understood organism on the planet? Maybe the elephant? They are large, easy to observe, and are the subject of countless documentaries. Maybe cows? They have been domesticated for thousands of years and are worshipped or consumed in almost every country on Earth. I'd like to give you the hint that you need to think smaller, but this is a microbiology course, so you probably already assumed as much.

I'm going to reveal the answer, but I want you to play word association. When I give you the name, say the first thing that comes to mind.

The most studied and well-understood organism is E. coli.

I bet a poll of one hundred students would reveal that a majority immediately thought of food poisoning or illness. In reality, associating food poisoning with E. coli is like letting one rotten apple spoil the whole bunch. The world of E. coli is much larger and more important than that. Let's take a look and see why. 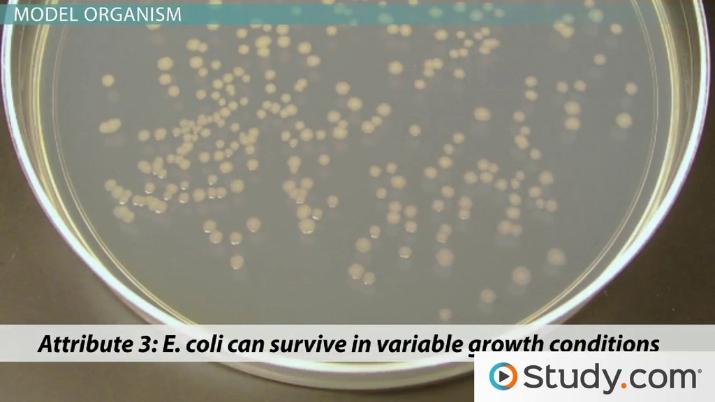 Coming up next: Growth Requirements of E. coli and Auxotrophs

Escherichia coli, or E. coli for short, is a Gram-negative, rod-shaped bacteria that is a normal inhabitant of the lower gastrointestinal tract of warm-blooded animals. Scientists estimate that E. coli first evolved between 120 and 160 million years ago, about the same time as the appearance of mammals. It is likely that E. coli has been living in the colons of mammals for the entire history of both groups. Further evidence for this symbiosis is the relatively rare ability of E. coli to utilize lactose, which is the sugar of milk, found only in mammals. Also, E. coli are able to survive in the presence of bile salts, which are caustic and used in digestion.

In addition to thriving in the colon, E. coli can also survive outside the body. Environmental E. coli can be spread through feces as the bacteria pass out of the body. These two habitats are about as opposite as you can get. The colon is relatively stable, warm, anaerobic, and nutrient-rich. Outside of the colon, conditions can be extremely harsh and variable, much colder, aerobic, and provide fewer nutrients.

The fact that E. coil is able to survive such variable conditions is one advantage that led to its use as a model organism. A model organism is a species that is extensively studied to understand a specific phenomenon, expecting that the knowledge gained can be applied to other species as well.

Attribute 1: E. coli is a single-celled organism. There are no ethical concerns about growing, manipulating, and killing bacterial cells, unlike multicellular model organisms like mice or chimps. They are also tiny cells, so in a small laboratory you can have flasks containing billions of cells that take up very little room, allowing many experiments.

Attribute 2: E. coli is able to reproduce and grow very rapidly, doubling its population about every 20 minutes. This is helpful in a lab situation where waiting for subsequent generations to produce experimental data can be the rate-limiting step. With E. coli it is as easy and fast as letting them grow overnight. Trying to study the same process in subsequent generations of elephants, for example, would require several generations of scientists and more elephants than we have on the planet!

Attribute 3: E. coli can survive in variable growth conditions. As we discussed earlier, this leads to it being very adaptive yet forgiving in lab situations. Culture media containing simple and inexpensive ingredients and nutrients can successfully spur E. coli to grow and divide.

Attribute 4: Most naturally occurring strains of E. coli are harmless. Those food-poisoning E. coli that sprang to mind earlier are the exception, not the rule. When scientists first started using E. coli for lab experiments, they chose a strain that was harmless. This means that studying E. coli poses little threat to researchers and the public.

Attribute 5: E. coli can be genetically manipulated very easily. The genetics of E. coli are well-understood and can be readily manipulated, or engineered. This is the most important and multifaceted attribute contributing to the use of E. coli as a model organism.

The genomes of many strains of E. coli have been sequenced. These sequences have been scrutinized so heavily that the way the cell works is very well understood, and changing and manipulating the DNA sequence can have predictable results. The more experiments that are done, the better we understand how the E. coli cell works and the more useful it becomes as a model organism, making it a loop of ever-increasing utility.

E. coli can have additional pieces DNA separate from the chromosome called plasmids. This DNA is often not essential to the survival of the bacteria but can contain genes that confer survival advantages. E. coli have F plasmids, which allow for conjugation, which is the process of transferring DNA from one bacterial cell to another through a structure called a pilus. Scientists can engineer plasmids to contain new or mutated genes that can then be inserted into the cell to study the effect on the cell's physiology or to produce some product of interest.

E. coli are also the natural host cell of the bacteriophage lambda. A bacteriophage is a virus that targets bacteria and enables the process of transduction, which is the transfer of DNA from one bacterial cell to another via a virus. Lambda phage is itself a model organism used to study viruses. This is a major advantage for scientists because they can combine all the knowledge of E. coli and phage genetics to design new and better experiments that further our understanding of both organisms. In addition, the lambda phage can be used as a tool to manipulate the genetics of E. coli cells. For example, a lambda phage has been engineered to deliver the gene for human insulin to E. coli cells. This has resulted in cultures of E. coli that can produce insulin in large amounts. This insulin is harvested, and you can find it in your local pharmacy for use by diabetic patients.

Conjugation and transduction are two very useful techniques for introducing DNA to an E. coli cell. Nature has provided the scientists working with E. coli a very easy way of manipulating the cell's DNA. By exploiting these processes, potentially any gene can be inserted into the E. coli genome and subsequently be expressed.

Let's take a look back. Escherichia coli, or E. coli, is a natural mammalian gut bacteria used as a model organism for scientific research. Model organisms are used to explore biological phenomenon with the intention of applying the knowledge to other species. E. coli is a perfect model for several reasons:

After viewing this video, students should be able to recount the positive study of E.coli due to it's single-cell make-up, harmlessness to scientist, and easy to manipulate genetics.

What Is Blue Biotechnology? - Applications & Examples