View bio
In this lesson, you'll learn about ethical codes of conduct and why they were developed. You'll also learn about the two main parts of an ethical code of conduct, which will be illustrated with some real-life examples. Updated: 05/15/2020
Create an account

Michelle has been treated for depression by her psychologist, Dr. Casanova, for three months. She begins to develop romantic feelings for him and wonders if he has reciprocating feelings. Dr. Casanova starts scheduling her appointments later in the evening and for longer periods of time. After some mutual flirting, Michelle declares her feelings to Dr. Casanova and he shares that he feels the same. A sexual encounter, a whirlwind romance, and a quick, painful break-up ensues. Michelle is left confused, devastated, and betrayed. 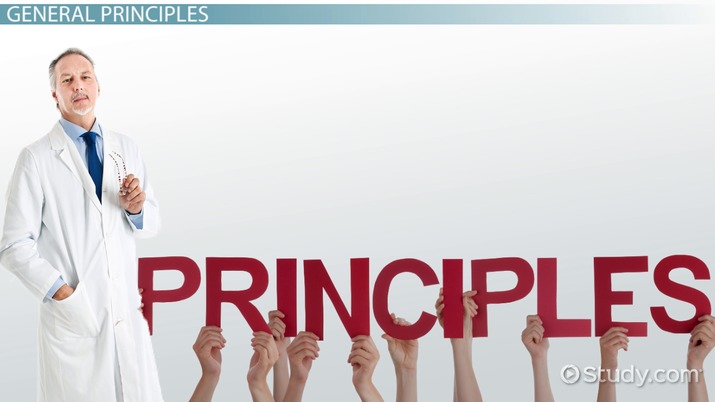 Coming up next: Eugenics: Definition & Explanation

Ethical codes of conduct were developed to protect students, patients, and research participants from harm by a licensed provider. These individuals are at increased risk of harm due to the power differential between the provider (more power) and the patient (significantly less power).

In the example above, Dr. Casanova is in an ideal position to exploit Michelle for many reasons. He has considerable information about the most intimate details of her life. She, being the patient, likely has very little information about him. Also, as Dr. Casanova is the treatment provider, he is deemed as having expertise and knowledge. In comparison, Michelle is a vulnerable patient, likely in emotional pain and hoping for treatment. Due to this power differential, Dr. Casanova has to take great care to not take advantage of Michelle for his own personal gain. However, in this situation, it is clear he violated both her trust and his licensing board's ethical code of conduct.

Attempt to resolve ethical issues by self-correction or by bringing it to the attention of the professional who is violating the standard. Unresolved issues must be reported to the licensing board.
Example violation: Dr. Cathem reports to the licensing board that his colleague is practicing without a license.

Don't deliver treatments you aren't trained to administer.
Example violation: Dr. Noitall is providing a new treatment for ADHD in children that he read about in a magazine.

Don't disclose patient information without written permission.
Example violation: Dr. Loozlips tells his friends at a cafe that Frank's wife had an affair without permission.

Advertising and other public statements

Don't falsely represent oneself, and don't solicit testimonials from patients.
Example violation: Dr. Phalse asks his patient to write him a recommendation on LinkedIn.

Keep patient records in a secure location for a specified period of time. Establish the fees for services early in the treatment process.
Example violation: Dr. Careliss leaves his patient files on his dining room table.

Complete thorough and accurate assessments. Let patients know what to expect with assessments and therapy. End therapy as appropriate with referrals as needed.
Example violation: Dr. A. Bandon decides during a session to stop treating Charlie because she doesn't like him. She tells him mid-session and doesn't offer anyone else that he might see instead.

Ethical codes of conduct vary across disciplines and licensing boards, but in general are aspirational guidelines and enforceable standards for professional behavior. General principles suggest ideals to guide professionals in their actions. Ethical standards of conduct are laws enforced by state licensing boards with legal consequences if violated. Ethical codes of conduct are in place to prevent harm to patients or other vulnerable persons treated by licensed health care providers.

Prompts About Ethical Code of Conduct:

Example: Begin your essay by noting that the ethical codes of conduct are intended to regulate the behavior of health care providers.

Write an essay of at least three to four paragraphs that explains the role of ethical codes of conduct in regulating power differentials.

Example: The human relations standard of conduct helps prevent patients from being taken advantage of by the health care provider, who has greater power.

Create a poster, chart, or other type of graphic organizer that spells out the general principles listed by the American Psychological Association.

Example: For justice, you could draw or provide a picture of the scales of justice.

Make a brochure that lists the dos and don'ts of ethical standards of conduct. You could use illustrations and words, or just words. List a do and a don't for each standard.

Code of Ethical Conduct in the Teaching Profession

The Importance of Ethics in Accounting

Code of Ethics: Compliance-based and Integrity-based

The Relationship Between Customer Satisfaction & Retention