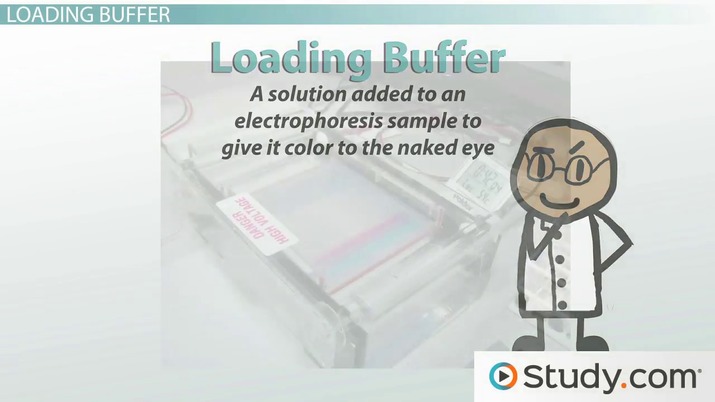 However, note that any molecule that binds to or in any way alters the molecular structure of DNA can be dangerous to a living organism. Although there is some debate about the exact nature of the health risk posed by exposure to ethidium bromide, most organizations and agencies do consider it a risk. Because of the intercalating characteristic of ethidium bromide, it is believed by many to pose a mutagenic risk. However, with strong safety protocols in place, ethidium bromide continues to be one of the most common methods of visualizing nucleic acids in agarose gel electrophoresis experiments.

Well, that's the end of the story, right? Agarose is going to separate DNA molecules based on size, and ethidium bromide is going to tag the molecules so we can visualize them under UV light. Well, not exactly. DNA, like many biological molecules, is colorless. To complete the electrical circuit, the gel must be bathed in a salt solution called electrophoresis buffer. Water is also colorless. See the problem?

If DNA is colorless and the electrophoresis buffer bathing the agarose gel is also colorless, how are we going to tell if we've inserted the DNA sample into the well of the gel or not? We could add ethidium bromide and perform the entire protocol under UV light, but that seems unnecessarily dangerous to our health. The answer is that we need to use a different solution, called loading buffer. Loading buffer is added to a DNA sample to give it color to the naked eye.

Notice that monitoring the progression of the dye molecules in the gel will also allow us to determine when the protocol is complete. Fantastic. Now I can tell if I've accurately inserted our DNA sample into the well. But there's still one more problem. DNA is an aqueous molecule.

That means that it is hydrophilic and will dissolve in water. If our DNA samples dissolve in the water of the electrophoresis buffer, the DNA molecules will be spread evenly throughout the solution and will not stay localized to the given well.

While qualitative visualization of DNA molecules is certainly helpful, experiments often require much more precise analysis of DNA fragment size. Rather than only being able to conclude that fragment one is larger than fragment two, scientists often need to be able to conclude that fragment one is three kilobases and fragment two is one kilobase. To be able to determine the size of a DNA fragment, scientists use something called a DNA ladder. A DNA ladder is a solution composed of DNA fragments of known length.

Since the size of each band in a DNA ladder solution is known, they can be used to determine the size of DNA fragments in experimental samples. Consider the following experiment. A four-kilobase piece of linear DNA has been digested with a restriction enzyme. A DNA ladder, uncut DNA, and digested DNA samples have been run on an agarose gel. See how the bands of the DNA ladder provide a point of comparison for the experimental samples? Since we know the sizes of the DNA fragments in each band, we can confirm that the uncut fragment is four kilobases because it lines up with the four-kilobase fragment in the DNA ladder sample.

We can also determine that the restriction enzyme has cut this fragment into three- and one-kilobase fragments by comparing the bands in the digested sample lane to those in the DNA ladder lane. For bands that do not perfectly align with one of the bands in the DNA ladder, size can either be estimated with the naked eye or determined using a mathematical calculation. In this way, scientists can use gel electrophoresis to verify or discover the size of DNA fragments.

Loading buffer is a solution added to an electrophoresis sample to give it color and density. A DNA ladder is a solution composed of DNA molecules of known length that is used to determine the size of DNA fragments in experimental samples.

What is Annealing? - Definition, Biology & Process