In this lesson, we will talk about a few of the different ethnic groups in Egypt, a country in North Africa with one of the oldest civilizations in the world. Updated: 05/24/2021
Create an account

Egypt is a country in North Africa. It's about eight times larger than the U.S. state of Ohio, with a population of around 93 million. Egypt has a rich history. It's one of the oldest civilizations in the world and, of course, home to the pyramids, one of the most iconic sites on Earth. You may also have read about Egypt in the news recently, when protesters led strikes and demonstrations to oust President Hosni Mubarak.

Egypt is largely dominated by one ethnic group: the Egyptians. But there are also two smaller groups, the Bedouins and the Berbers. Let's look at all three of these cultures now. 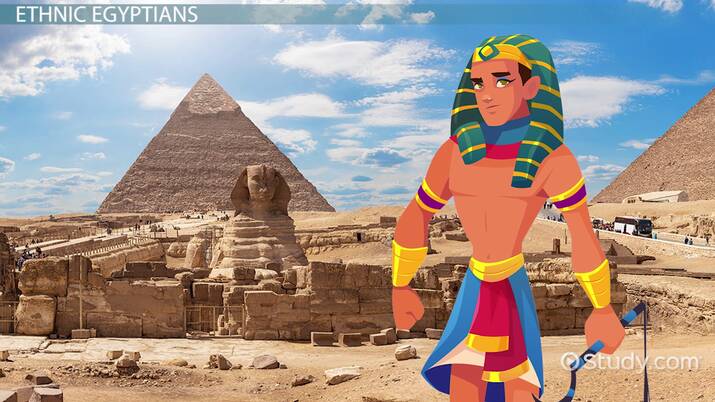 Coming up next: Ethnic Groups in France

By far the largest ethnic group in Egypt are the Egyptians, which refers to both an ethnic group and a nationality. About 99% of the country's population are Egyptian citizens, as opposed to, for instance, those who are in the country to work but aren't citizens. Around 99% of Egyptian citizens also identify ethnically as Egyptian. Almost all Egyptians are Muslim. There are some Christians in Egypt, though, known as the Copts. The Copts are the largest Christian group in Egypt, and have historically been persecuted for their beliefs.

Egypt was home to one of the world's earliest civilizations, and has a rich history of language and culture. Today most Egyptians speak Egyptian Arabic, which is one of the most widely understood varieties of Arabic in the Muslim world, though throughout history Greek dialects were also spoken. Egyptian was one of the first written languages, in the form of hieroglyphics.

So we know that Egyptians are the largest Ethnic group in the country, but what about the other 1% or so? Let's talk about a few of the minority ethnic groups that make up a very small part of Egypt's population.

The Bedouins refer to a group of tribes who live across Northern Africa. The Bedouin are a very ancient people. We can trace the origins of the Bedouin to the people who came to North Africa from the Arabian Peninsula. The Bedouin people are made up of a number of different tribes in many different regions of Egypt. Some Bedouin tribes are nomadic, meaning they travel from place to place in search of necessities like food, water, and shelter. In traditional nomadic tribes, homes consisted of tents that could be moved from place to place. Women were responsible for taking them down and then reassembling them. However, not all Bedouins are nomadic. Some live more sedentary lives, not moving from place to place.

Modern culture has also changed the way some Bedouins live. Today, many children do not wear the traditional dress, though women still dress very modestly. Since the middle of the 20th century, many Bedouins have settled in cities and adopted a modern lifestyle.

Berbers are another small minority who live in Egypt as well as across North Africa. The number of Berbers is very small in Egypt, though Morocco and Algeria have much larger populations of Berbers. The term ''Berber'' was actually given by conquerors, and today Berbers generally use their own term, Amazighen. Berbers are largely Muslim, like most of the population in Egypt. Many speak the Berber language, which is actually a family of a number of different closely related languages and dialects, though many have adopted other languages. The Berbers were not originally Islamic, but converted after much time settling in North Africa.

Traditionally, the Berber people have survived through subsistence agriculture, which is a practice of agriculture that focuses on growing small amounts of food to sustain a group of people. Berbers lived in tight-knit, self-sustaining villages, though this has changed somewhat in the modern age. Due to changing social and economic pressures and growth in things like commercial farming, many Berbers find it necessary to participate in more formal economic activities to help the villages survive. Many Berbers must seek out jobs in urban places, particularly young Berber men, in order to supplement the income provided by subsistence farming. This helps to both supplement traditional ways of life and ensure it is preserved to some degree.

All right, let's take a moment or two to review. Egypt is a fairly large country in North Africa and is one of the oldest civilizations in the world. It isn't home to as many ethnic groups as other countries in North Africa; in fact, Egyptians make up about 99% of the population. Egyptian refers to both a nationality and an ethnic group. Egyptians speak Egyptian Arabic, one of the most widely understood varieties of Arabic in the Muslim world, and are mainly practicing Muslims. However, the Copts are the largest group of Christian Egyptians in the country.

The Bedouins have traditionally been a nomadic population, meaning they travel from place to place to subsist. Berbers have largely operated within a system of subsistence agriculture, which is a practice of agriculture that focuses on growing small amounts of food to sustain a group of people. However, in the modern era many Berber men are forced to migrate to urban centers to find work.

The Kush & Axum Civilizations on the Swahili Coast: Development & Interactions

The Unification of Upper & Lower Egypt

Ethnic Groups in the Philippines

What Is an Annexation of a Country? - Definition & Examples