Lesson Transcript
Instructor: John Williams
Ethylene is a colorless and flammable hydrocarbon that is useful in commercial and biological applications. Learn about the structure, properties, and commercial/biological uses of ethylene. Updated: 09/15/2021
Create an account

Hydrocarbons are molecules that contain hydrogen and carbon. These molecules vary widely in terms of the numbers of carbons and hydrogens, the numbers of single and double bonds, and the structural orientation of each component. Therefore, it is possible to have extremely small hydrocarbons, such as methane, and extremely large hydrocarbons. In this lesson, we will discuss ethylene, one of the smaller, but biologically and commercially useful hydrocarbons. We will also discuss its properties and uses.

Ethylene is one of the simplest hydrocarbons. It comes in a gaseous form, and similar to many other hydrocarbons, it is colorless and flammable. It consists of two double-bonded carbon atoms with hydrogen atoms occupying the other bond positions. This gives ethylene a chemical formula of C2H4. The structural shape of the ethylene molecule is linear, or a straight line, due to the presence of the double bond in the center of the molecule.

Ethylene has a distinctive property that makes it relatively well recognized. Ethylene has a sweet, musky smell which makes it identifiable in the air. This smell is typically of pure ethylene gas. It can fade as ethylene mixes with other chemicals and gases. 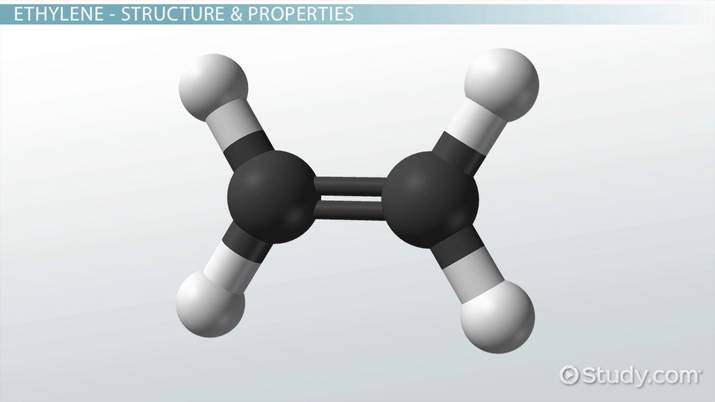 Ethylene is commercially as a precursor for larger organic, or carbon containing, materials. Single ethylene molecules can be bonded together to make polyethylene, which means 'many ethylene molecules.' Polyethylene is used to make plastics, such as trash bags and films. It is also used to make detergents and synthetic lubricants, which are chemicals used to reduce friction.

Ethylene can be used to form styrenes, which are used in the making of rubber and protective packaging. Additionally, it is used in footwear, particularly in sports shoes, and in tires. These products are commercially important for many industries, and therefore, ethylene is one of the most commonly produced hydrocarbons globally.

Have you ever smelled the aroma of fresh fruit? That aroma is usually specific to the individual fruit that is present. However, the ripeness of fruit that leads to that smell is due to the production of ethylene. Many plants release ethylene as a gas hormone for communication with other plants. In plants that produce fruit, ethylene will promote ripeness. In plants that contain flowers, the blooming and maturation of the flower will be under ethylene control. Finally, many plants use ethylene to promote the loss of leaves seasonally. While commercially, ethylene is an important molecule, biologically, it is critical for the development of various plant species.

Let's review. Ethylene is a simple hydrocarbon that is important in biological and commercial settings. Many industries use ethylene for product development and as a precursor for larger products. Plants also use ethylene for hormone communication. This simple molecule has many complex uses and is responsible for the production of many items that we use daily.

What is Polyethylene? - Properties & Uses

What is Hydrocarbon? - Definition, Formula & Compounds

What is Benzene? - Uses, Structure & Formula

What is Polymerization? - Definition, Types & Examples