EU treaties were designed to create peace between European countries and encourage collaboration and integration. Study the purpose of the EU treaties and major treaties that have changed Western European politics and led to the creation of the EU. Updated: 10/06/2021
Create an account

For centuries, the most significant events in European history were often wars or battles. Whether it was the Thirty Years' War in the 17th century, the Battle of Agincourt in the 15th, or even World War I only a century ago, just about every generation in Europe had its continental conflict. Considering this, it's all the more significant that the most important international events in Western Europe in the past half-century are treaties, not battles. These treaties have helped build the international coalition we know today as the European Union (EU). The rest of this lesson will detail several of the most important EU treaties and the changes they made to Western European politics and the creation of the EU. 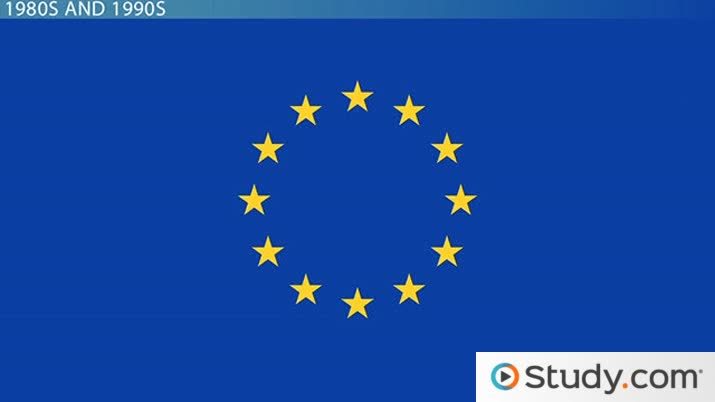 Coming up next: The History and Structure of the Parliamentary System of Government

The first treaty created the first Western European organization which would evolve into the EU: the European Coal and Steel Community (ECSC). Signed in 1951 and enforced in 1952, the unimaginatively named Treaty Establishing the European Coal and Steel Community did exactly what its name suggests. The ECSC was a six-nation body, composed of West Germany, Belgium, Netherlands, France, Italy, and Luxembourg. The ECSC pooled the vital industrial resources of coal and steel between the six countries.

Not only was it meant to encourage economic growth across the region through the removal of tariffs on these resources but also improve the cooperation between governments and nations who were so often at war with one another. The idea was that with industrial resources pooled, one country in the ECSC would be less likely to attack their trade partner. Additionally, if they chose to attack anyway, the other country would have advanced notice as they would likely observe the attacking country's buildup of industrial resources firsthand.

The ECSC was a success across the region and before long these same countries looked to integrate their economies even further. In 1957, the six member nations signed two treaties, both in Rome. The first Treaty of Rome established the European Economic Community (EEC). This created a new institution alongside the ECSC, which was formed to foster a general sense of greater economic cooperation between the six nations. The second Treaty of Rome created another entirely new institution, EURATOM. EURATOM was created to manage nuclear energy across the region.

These six nations continued working together for each other's great economic benefit throughout the 1950s and 1960s. However, as these institutions grew larger and more powerful, the three organizations, meant to bring countries together, could themselves not cooperate well enough. As a result, in 1967, the six member states agreed to the Merger Treaty in Brussels. The Merger Treaty simplified the leadership hierarchies of the ECSC, EEC, and EURATOM. Though all three institutions remained separate and with their own mandates, they were now led by a single council, which governed and directed all three.

European institutions remained in that form for nearly two decades, though the amount of participating nations grew as the United Kingdom, Ireland, and Denmark joined in 1973 and Greece joined early in the 1980s. By 1986, the EU was on the verge of accepting Spain and Portugal into the union as well. In fact, the next treaty on our list, the Single European Act (SEA) of 1986, was signed in part in preparation for the admission of Spain and Portugal. This is because of the far greater economic cooperation that existed between EU nations already in the 1980s, especially in currency manipulation.

Since the 1970s, EU nations had been working toward the creation of a common, single economic market which would not be hindered by international borders. To this end, EU currencies were connected to one another in a system which did not allow one currency's worth to stray far from another. As both Spain and Portugal's national currencies were weaker than those of the other nations, special exceptions had to be made.

The Single European Act made these exceptions, but it also did more to encourage the creation of the single, European market. It made significant changes to voting processes in EU institutions in economic matters. Prior to the SEA, all measures passed by EU institutions required a unanimous vote by member states before they could be enacted. The SEA changed it so that any law that helped create the common market only needed a majority. With this new measure, single states could no longer block important steps in creating the single market as had happened several times in previous decades.

In 1997, EU countries signed the Treaty of Amsterdam. The treaty significantly reformed EU institutions to make them more efficient and malleable. This was incredibly important because the EU was then in negotiations with several formerly communist Eastern European nations who wanted to join the EU. The treaty's reforms were necessary to ease the EU's transition to becoming an even larger organization.

The Treaty of Amsterdam's reforms were not alone sufficient to prepare the EU. In 2001, EU countries signed the Treaty of Nice, which made further changes to EU institutions in preparation of adding ten Eastern European members. Many of these reforms dealt specifically with procedures and voting rules in the European Commission and European Council.

Finally, EU member nations signed the Treaty of Lisbon in 2007. The treaty made EU institutions more democratic and granted the European Parliament greater power in creating EU laws. It also made the EU more flexible, intending to make the EU more able to address global problems like energy or financial crises and climate change. The treaty also did a better job than previous treaties at spelling out exactly which EU institutions possessed which powers.

For centuries, the powers of Europe had fought one another in generational warfare. However, after World War II - Europe's second multimillion casualty war in less than fifty years - some nations decided that further warfare and destruction could be prevented through increased international cooperation. At the same time, this cooperation would likely benefit the participating nations economically.

Since World War II, several treaties have been signed which have created, changed, and added new member states to the growing cooperative organization that today we call the European Union. From the Treaty Establishing the European Coal and Steel Community in 1951 to the Treaty of Lisbon in 2007, European countries have worked together to integrate their economies, societies, and political systems, while at the same time avoiding military conflict on the continent.

The main points of this video lesson are designed to help you to: