Derrick has taught biology and chemistry at both the high school and college level. He has a master's degree in science education.

If you go outside to a pond or stream and scoop up a bucket of water, you will probably have many microorganisms in the bucket. One very common one is known as Euglena. Euglena is a unicellular microorganism belonging to the kingdom Protista.

Members of kingdom Protista are mostly unicellular organisms that are found in damp places or in water. Protists are often considered a challenge to classify by scientists because of their unique characteristics. Some protists have chloroplasts and undergo photosynthesis to produce energy, making them plant-like. Other protists are completely heterotrophic, which means they eat other organisms and obtain their energy by means other than photosynthesis, making them animal-like. A few species of protists even live in damp places and feed off of decomposing matter, making them fungus-like. These variations, as well as the abundance of body types, have made them a challenge to classify.

Euglena belong to the phylum Euglenozoa. Members of this phylum are unicellular organisms mostly found in freshwater, with a few found in saltwater. The all have a flagellum to use for movement and have chloroplasts, but can also feed as heterotrophs. More specifically, they belong to class Euglenoida. All members of this class are found in freshwater and do photosynthesis or feed by diffusion of other organisms. They also have a tough outer coating known as a pellicle.

While further classification is somewhat disputed, most scientists agree that the common Euglena belongs to order Euglenales, family Euglenaceae and genus Euglena. The specific requirements for these groupings are vague, but they are known to contain organisms with similar characteristics of the Euglena we are studying in this lesson. As you can see, from the level of kingdom and down, the characteristics and requirements for classifying Euglena get more and more specific. Let's move on to learn about the structure and characteristics of these organisms. 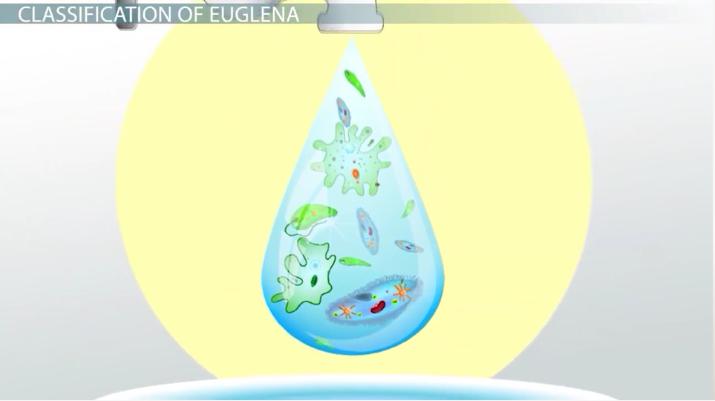 Try it now
Back
Coming up next: The Origin of Life on Earth: Theories and Explanations

Structure and Characteristics of Euglena

The Euglena are unicellular organisms with flagella. These flagella are long whip-like tails used for movement. Structurally, they do not have a cell wall. Instead, they have a thick outer covering, known as a pellicle, that is composed of protein and gives them both strength and flexibility. They are eukaryotes; this means that inside of them you can find all common cellular organelles, such as ribosomes to make proteins, mitochondria to produce energy, chloroplasts to produce energy, a nucleus to control activities, and vacuoles for storage.

The presence of both mitochondria and chloroplasts makes them unique. When they are in the sunlight they are capable of using it like plants to produce energy. When they are in darkness they are able to feed on matter and other smaller organisms just like any animal. If they feed on other organisms, it is primarily through the process of phagocytosis. This is when they surround the organism or matter with their membrane and absorb it into themselves. They have a very primitive eyespot that allows them to determine the level of light in their environment.

Euglena reproduce asexually by the process of binary fission. This means that an adult Euglena can simply undergo a process and split into two Euglena. Essentially, they make a clone. Their structure and way of life has made them very successful. Euglena have been around for thousands of years and continue to thrive all over the world today.

Euglena are unicellular protists with a characteristic whip-like tail known as a flagellum. They are primarily found in freshwater, but some do live in moist areas or saltwater. They are able to consume matter and organisms and to do photosynthesis when conditions are favorable. They reproduce by binary fission and have adapted to live successfully all over the world.