Euphemisms allow for conversation about offensive, uncomfortable, or taboo subjects through alternate phrasing. Explore some examples of euphemism in everyday conversation and literature, including 'Hamlet' and 'The Great Gatsby'. Updated: 08/23/2021
Create an account

What Is a Euphemism?

In movies, women always excuse themselves to the bathroom with a clever line: 'I have to visit the little girl's room;' 'Excuse me while I go freshen up;' 'I'm going to go powder my nose.' We all know what happens in the bathroom, but it is not considered polite to say you are going to, you know, go.

Situations like having to politely excuse yourself to go to the bathroom are why we have developed so many euphemisms or alternate, inoffensive ways of saying something that might be considered improper or even taboo. Even the word 'bathroom' is a euphemism for the word 'toilet' along with other names like 'washroom,' 'powder room,' and 'restroom.'

We don't just have euphemisms about 'going to see a man about a horse'. We use euphemisms for all sorts of things, from death ('pass away,' 'passed on,' 'no longer with us,' 'kicked the bucket') to profanity ('geez' or 'gee,' 'darn,' 'Oh my gosh' or even 'OMG' in place of 'Oh my God'). Even the phrase 'pardon my French' is a euphemism apologizing for using profanity in the first place. 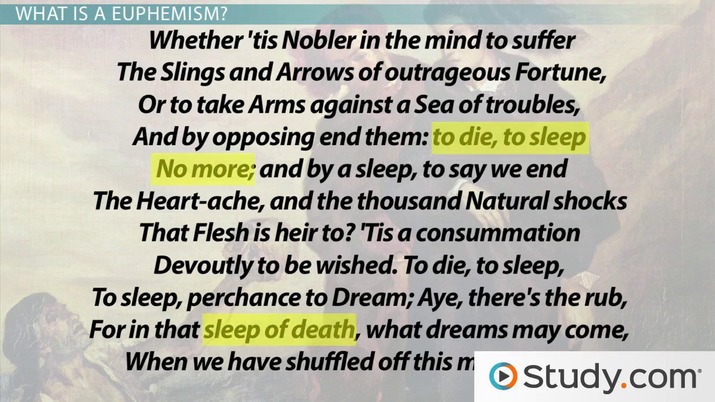 Coming up next: Symbolism & Imagery in Literature: Definitions & Examples

In literature, writers use euphemisms as they would any other literary device: to carefully craft characters, enhance dialogue, and sometimes to create a beautiful image. As with everything else he touched, Shakespeare was a master of the euphemism. He even thought up a few we still use today.

In Act III of the play The Merry Wives of Windsor (1602), Mistress Page exclaims: 'I cannot tell what the dickens his name is.' 'Dickens,' in this case, is a likely polite way to avoid mentioning the devil. That is why when we want to express shock, we can use Shakespeare's more appropriate 'What the dickens?' around our grandmothers.

You may have heard of Shakespeare's Hamlet, a tragic play about the young prince of Denmark whose father dies under suspicious circumstances. Hamlet is also known for the long speech Hamlet gives which begins like this:

To be, or not to be, that is the question:
Whether 'tis Nobler in the mind to suffer
The Slings and Arrows of outrageous Fortune,
Or to take Arms against a Sea of troubles,
And by opposing end them: to die, to sleep
No more; and by a sleep, to say we end
The Heart-ache, and the thousand Natural shocks
That Flesh is heir to? 'Tis a consummation
Devoutly to be wished. To die, to sleep,
To sleep, perchance to Dream; Aye, there's the rub,
For in that sleep of death, what dreams may come,
When we have shuffled off this mortal coil…

There are a couple of euphemisms in there; see if you caught one. First, there are a few more polite (and poetic) substitutions for death: to sleep no more, the sleep of death. This passage also contains other euphemisms for death Shakespeare made up - to shuffle off this mortal coil - which is both unique and poetic. Besides letting us talk about taboo topics a little bit more easily, euphemisms can also be clever, funny or even eloquent.

Of course, Shakespeare isn't the only writer to use euphemisms to strengthen their writing. Imagine if you were writing a novel about a little girl named Gigi. Maybe you decide that Gigi always says 'Beans and rice!' (a euphemism for 'Jesus Christ') under her breath when she's upset. Think about how just that one detail adds humor and a layer of authenticity to the character of the little girl and how the detail might add to novel overall.

Now let's consider two other well-known works that use euphemisms to great effect: F. Scott Fitzgerald's The Great Gatsby (1925) and The Things They Carried (1990) by Tim O'Brien.

In the novel The Great Gatsby, narrator Nick Carraway is our guide to the opulent, reckless lifestyle of the wealthy living in New York's West Egg in the Roaring Twenties. Nick describes the difference between the communities of West Egg and East Egg in the first chapter:

When Nick says 'the least fashionable of the two,' he's using a euphemism. It's not polite to talk about money, so he's letting the word 'fashionable' to do the talking for him. In this case, the difference is between old money (East Egg) and new money (West Egg) and all the subtle, 'superficial' distinctions that implies. The new money, from bootlegging mostly, is what makes West Egg more 'sinister.'

Tim O'Brien's collection of short stories, The Things They Carried, follows a group of U.S. soldiers serving in the Vietnam War. O'Brien understands that soldiers used euphemisms because they allowed them to talk about the death all around them:

Euphemisms are used in place of words and phrases that are commonly thought to be too offensive or taboo to talk about directly. We use euphemisms every day, from 'geez' in place of 'Jesus' to 'bathroom' in place of 'toilet.' Euphemisms can serve as a type of literary device, helping authors create richer characters and more interesting language and plots.

After watching this lesson, you should be able to define euphemism and explain how euphemisms help authors make their writing more interesting.

How to Recognize and Use Oxymorons

How to Avoid Redundancy in Your Writing

How to Write an Outline

What is a Dialogue in Literature? - Examples & Explanation