Harley has taught university-level History classes and has a Ph.D. in History

European exploration and colonization in Latin America led to the destruction of indigenous peoples by deadly diseases for which they had no immunity. Learn about Europeans arriving in America and the impact of Eurasian diseases. Updated: 11/12/2021
Create an account

If you were a member of an indigenous tribe living on the Caribbean island of San Salvador in 1491, you could not have known that your world was on the verge of being changed forever. Christopher Columbus' arrival in San Salvador on October 12, 1492, marked the beginning of the European conquest and colonization of the Americas. Europeans had advanced technologies in the form of gunpowder weaponry and steel. But most important of all, Europeans were aided by silent allies in the form of deadly Eurasian diseases, such as smallpox, influenza, and measles. It was a combination of these factors that paved the way for European success. 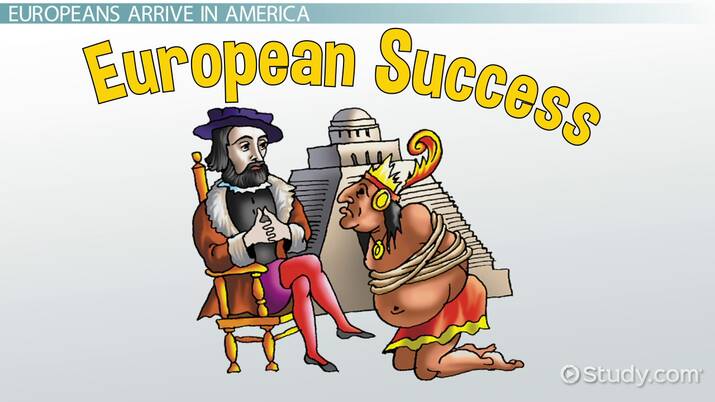 Try it now
Back
Coming up next: The Mexican Revolution: Causes & Initial Events

The conquistadors, or the Spanish explorers and conquerors who arrived in the New World, and the European armies that would follow them, were amongst the most technologically advanced armies of their age. They used intimidating weapons and armor and employed sophisticated, terrifying tactics. At long-range distances, the conquistadors used crossbows, arquebuses (which were guns with long barrels), and small cannons. European gunpowder weaponry of the 16th century could not kill people in great numbers, but its noise and impact had the power to intimidate.

Gunpowder weaponry inspired terror, but steel was the most important technology the conquistadors possessed. At close range, conquistadors used spears, halberds, and swords made of steel. Many conquistadors wore steel armor, and they were supported by armored cavalry. The Spanish technological advantage was on full display in numerous battles with Aztec and Incan forces. For example, in 1532, the Spanish conquistador, Francisco Pizarro, managed to fend off an army of 80,000 Incan warriors with 169 Spaniards without suffering a single casualty.

But military technology alone does not tell the entire story of how the Spanish were so successful. Conquistadors often came from lower social classes and didn't always have access to a complete set of steel armor. Furthermore, traversing humid, treacherous terrain in heavy steel armor was difficult; the armor rusted and was incredibly heavy. Indigenous armies also adjusted to Spanish tactics by, for example, deploying looser formations to mitigate the effects of gunpowder weaponry. Finally, conquistadors took advantage of infighting among the indigenous empires to weaken their military forces and to add to the Spanish numbers. For these reasons, we can't explain the Spanish conquest in military terms alone.

The Impact of Eurasian Diseases

There is not a precise figure for how many indigenous peoples died from Eurasian diseases, but some experts have placed the casualty figures as high as 90-95% of the indigenous population. Since indigenous peoples in the Americas had never been exposed to Eurasian diseases, they had no natural resistances or immunity to them. In particular, smallpox, influenza, and measles killed vast numbers. The Taino on the island of Hispaniola, for example, saw a population decrease from around 60,000 people in 1492 to less than 500 people by 1548.

After the initial arrival of a disease-carrying European, the disease would spread like wildfire through indigenous communities. Before Hernán Cortés conquered the Aztec capital of Tenochtitlan in 1521, smallpox ravaged the city and killed nearly half the population. After the arrival of Europeans in Central and South America, indigenous population levels never returned to their pre-1492 levels.

Indigenous peoples who survived initial contact with Europeans found themselves subjected to Spanish rule and forced to work under brutal conditions on Spanish encomiendas. Encomiendas were plots of land granted to conquistadors by the Spanish Crown, along with an allotment of indigenous labor. Though the encomienda system was eventually phased out by the Spanish Crown, it was representative of the oppression of the Spanish empire. In the face of a decimated indigenous population and in need of manual labor, the Spanish began importing African slaves. Latin America's demographic profile was changed forever as Europeans, Africans, and indigenous peoples mixed and had children. For the next three centuries, European powers carved up and ruled portions of Latin America.

Let's review what we've learned. The arrival of Europeans in Latin America had a catastrophic impact on the region's indigenous peoples. Beginning with Spanish explorers and conquerors known as conquistadors, followed by subsequent waves of European other conquerors and aided by advanced military technology, conquered the existing indigenous empires and introduced Christianity. The conquistadors' technology was far superior to that of the indigenous armies, with things like crossbows, arquebuses (which were guns with long barrels), and small canons decimating the ranks of those who opposed them.

However, as we learned, technology played a relatively insignificant part to the destruction of Latin America's indigenous people. As we learned, Europeans brought a host of deadly diseases, including smallpox, influenza, and measles, against which the indigenous peoples had no immunity. In other words, disease, rather than warfare, was the number one killer of Latin America's indigenous peoples. This massive loss of life made colonization easier for Europeans, leading to brutal conditions, such as the Spanish empire's use of encomiendas, which were plots of land granted to conquistadors by the Spanish Crown, along with an allotment of indigenous labor. When combined with European military and diplomatic victories, this all set the stage for over three centuries of European rule.

European Colonization & Imperialism in Africa | What was the Scramble for Africa?