In this lesson, explore a few major figures in modernist literature who helped define the 20th century, including Ezra Pound, Gertrude Stein, and Katherine Mansfield. Test your understanding of these figures with a brief quiz. Updated: 12/17/2019
Create an account

How do we define something as being modern? When exactly did the modern world begin? According to English novelist Virginia Woolf, the modern world began on or about December 1910. Okay, now obviously the answer isn't quite that simple. But as Woolf pointed out the world was changing in the early 20th century. New technologies, new ideas and industrial global wars changed the way that people saw the world, and this hit the arts in a major way, leading to the development of modernism, a rejection of traditional artistic rules and rise in individual experimentation.

In literature, this meant breaking from the traditional expectations about plot, structure, rhyme and verse, and experimenting with new ways to capture the attitudes and experiences of people in the 20th century. Out with the old, in with the new. In with the modern. 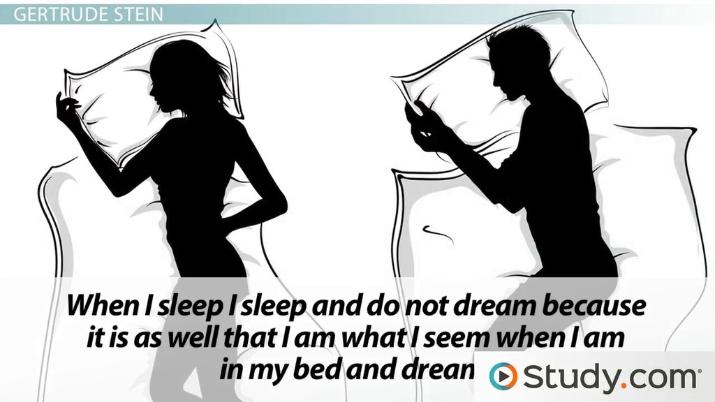 Coming up next: Mary Wollstonecraft and William Godwin: Politics and Essays

To express the attitudes of the modern age, intellectuals had to reject the conventions of the past and look to new experimental theories. That's where we find Ezra Pound, expatriate American modernist poet of the 20th century. Pound was one of the most influential writers of modernist literature and captured the attitude of this movement with his often-quoted mantra: 'Make it new!'

How do you turn something into a modernist work? Make it new!

Pound himself was most associated with developing the modernist style of imagism, a literary movement focused on the precision of imagery and clear, sharp language. Imagist poetry was also noted for its free verse, the lack of consistent meter or rhyme pattern. Focusing instead on more natural rhythms. This was a sharp contrast to the flowery, strictly regulated poetry of the late 19th century. Pound is credited as being one of the first major developers of modernist poetry, drawing inspiration from nontraditional sources, such as ancient Chinese poetry, rather than European classics.

Another influential writer to embrace the new modernist attitude was Gertrude Stein, American modernist novelist and poet of the early 20th century. Stein was a passionate writer, experimenting with bringing new ideas into novels, plays, short stories and poems. Her work is characterized by a playful, conversational and humorous tone that emulates the rambling of the mind, which in literature is called the 'stream of consciousness.'

Listen to this quote from one of Stein's writings: 'When I sleep I sleep and do not dream because it is as well that I am what I seem when I am in my bed and dream.'

Can you see how rather than a strict structure, the sentence feels as if it was written as it was imagined, reflecting that stream of consciousness? That's Stein's style. Streaming, humorous and pointedly rejecting traditional ideas of literature.

Modernist literature as it appeared in the English language was largely an American phenomenon, carried by writers like Pound and Stein. This doesn't mean, however, that Americans were the only ones experimenting with modernist ideas. Katherine Mansfield was an early 20th century modernist short story writer from New Zealand, whose works had a dramatic impact on the literary world.

Mansfield's short stories helped give modernist ideas a real-world feel, because her characters lived normal lives, dealt with contemporary issues, and had real human struggles. Through a series of seemingly unimportant moments, these stories would build up into unexpected narratives. Her focus on real people, not the traditional upper-class characters of most literature, included several Maori characters, the native people of New Zealand who, at the time, were being violently oppressed.

With that, Katherine Mansfield joined Ezra Pound and Gertrude Stein as one of the leading authors who saw the world as being a bit more modern.

In the early 20th century, writers began experimenting with new ideas. These modernist authors rejected traditional artistic rules for individual experimentation. Modernist literature, therefore, moved away from the flowery prose and strict technical and stylistic rules of the 19th century. One of the leading figures in modernist literature was Ezra Pound, American modernist poet of the twentieth century. Pound helped establish the movement Imagism, devoted to precision of imagery, clear, sharp language, and free verse that rejects stiff rules about meter and rhyme. Another literary great was Gertrude Stein, American modernist novelist and poet of the early 20th century whose works captured a playful and humorous freedom. Her stream of consciousness works captured the rambling, flowing sensation of conversation and thought. Finally, we've got Katherine Mansfield, an early 20th century New Zealand modernist author who wrote short stories filled with real, dramatic characters.

These three figures, along with other great modernists, helped define the 20th century as one of experimentation, over tradition. Out with the old, in with the new.

Song of Myself by Walt Whitman: Summary, Themes & Analysis

How to Answer Multiple Choice Questions About Literature: Test-Taking Strategies

The Love Song of J. Alfred Prufrock: Overview and Analysis

Present and Future Value: Calculating the Time Value of Money