International tensions between democracies supported by the United States and the communist governments backed by the Soviet Union led to conflicts throughout Latin America beginning in the 1950s. Follow the effects of U.S. policy and explore the histories of revolutions in Guatemala, Nicaragua, and Cuba during the Cold War between the superpowers. Updated: 10/09/2021
Create an account

Being a child of the '80s, I can remember the Soviet Union crumbling and newspapers full of headlines screaming 'End of the Cold War.' It was big news! My teachers talked about it in school and my parents talked about it at the dinner table.

Despite all the hubbub the Cold War created, I can't recall Latin America being referenced very often. Yes, there were talks of rebels, Nicaragua, and Castro, but other than that, information was pretty scarce. Since there was a huge connection, today's lesson will be devoted to Latin America during the Cold War. It will specifically highlight the countries of Guatemala, Nicaragua, and Cuba. Because this is such a huge amount of information to cover in one lesson, we'll go for breadth rather than depth.

Before we dive into these countries, let's define what we mean by the Cold War. For our purposes, we'll define it as a time of political antagonism that existed between the US and the Communist Party, specifically the Soviet bloc countries, from about 1945 to 1990. Although the main players were the US and the Soviet Union, other parts of the world were definitely caught in the crosshairs. This was especially true in Latin America. 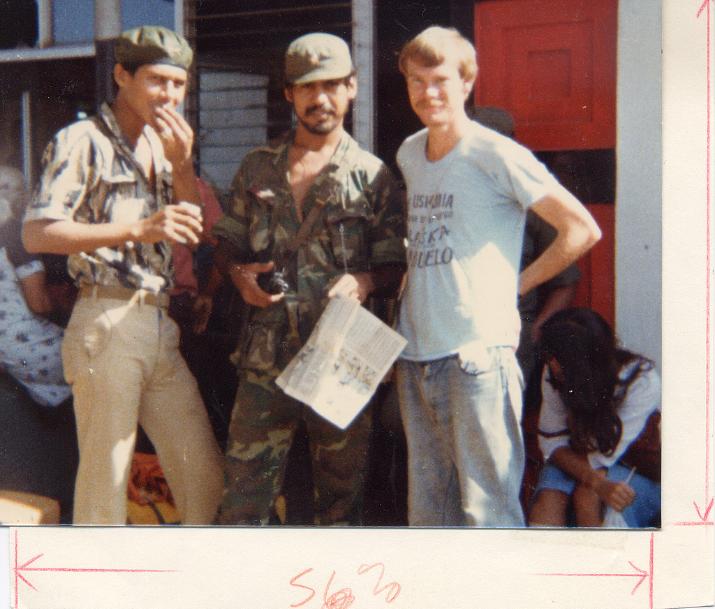 Try it now
Back
Coming up next: The Chilean Revolution & Augusto Pinochet

In the late 50's, the US began an official policy to keep any Communist influence out of the Western Hemisphere. In other words, the American government wanted to make sure no communists moved into the neighborhood, especially Latin America. With this end in mind, the US took on the task of trying to prop up several of the rulers of Latin America. Yes, they may have been kind of bad guys, but I guess they seemed better than having communists living on the same block. After all, it WAS the Cold War.

Despite what the US may or may not have intended, many of the leaders they backed became brutal tyrants. With the support of the US, perhaps they figured they were untouchable and above the law and maybe even human decency. Abusing their power, many became very wealthy while their people suffered in poverty. As this happened throughout time, this led to unrest and revolution.

For example, in Guatemala a revolution occurred that lasted over 36 years and saw 200,000 lives lost. To explain, in the 1950s, Guatemala was ruled by the communist president, Jacob Arbenz. Now, being that he was a communist, the US wanted him gone, so they backed a group of military officials who were trying to oust him.

Fortunately for these military rebels, they won. Unfortunately for the people of Guatemala, they were as bad if not worse than Arbenz. Under their rule, the poor of Guatemala were stripped of their lands and their rights. With this, the stage was set for years of rebellion in which rebels who favored leftist, communist ideologies fought with the military rulers, while each side killed innocent civilians.

Sadly, this cycle of atrocities continued until after the Cold War ended and a peace treaty was signed between the official government of Guatemala and the rebels in 1996.

Unfortunately for the lands of Latin America, a similar scene played out in Nicaragua during the Cold War.

In the 1930s, Augusto Sandino, a leftist-leaning rebel, was making some real waves in Nicaragua. Since he had communist leanings, this made the US rather nervous. For this reason, they backed Anastasio Somoza as the official leader of Nicaragua. With the US behind him, he was able to gain absolute power over the people of the land. With this, the Somoza dynasty would control Nicaragua for decades. Unfortunately, their reign would also be one of brutality and war. However, the US continued to back them through most of their reign.

Like in Guatemala, the Somoza regime horribly abused the populations of Nicaragua. This oppression planted the seeds of rebellion. Soon, leftist rebels organized and named themselves Sandinistas, after Augusto Sandino, the guy the US helped get rid of many years earlier.

Although the Sandinistas caused a good deal of turbulence during the '60s, with the US behind them, the Somozas were able to keep control of the country. However, the poor of Nicaragua continued to suffer as revolution and violence filled their lands.

Fortunately for the rebelling Sandinistas, the Somoza dynasty fell out of grace with the US and the rest of the democratic West when they started abusing foreign aid. When they shot and killed an American reporter, all bets were off. Losing the support of the democratic West, the Somoza regime toppled and the leftist Sandinistas took control. This control lasted until 1990, when more US-backed rebels came and took it from them.

Perhaps the most famous events of Latin America during the Cold War occurred in Cuba. To prove this, all we have to say is the name 'Fidel Castro'!

Castro's Cuban Revolution took place between 1953 and 1959. It saw the forces of Fidel Castro take on the government of the military dictator of Cuba. Ironically, in this conflict, Castro was the one promising freedom to the people.

With promises of independence and a very small fighting force, Castro took on the ruling dictatorship of Cuba. Using ambushes and hit-and-run tactics, he was able to weaken his opponents while also spreading his promise of freedom. In around the year 1958, Castro went on a huge offensive. With this offensive being successful, he was able to oust the old dictator and give himself the place of power.

Of course, as history tells us, Castro didn't quite make good on the whole freedom promise. Instead he allied himself with the Communist Soviet Union.

Of course, the US was not happy to have a communist sympathizer of sorts so close to Florida! This displeasure almost turned to war during the famous Bay of Pigs, a failed attempt by US-backed rebels to overthrow Cuba, and the Cuban Missile Crisis, a standoff occurring when Soviet missiles were found in Cuba and the US blockaded the island.

Fortunately, tensions have never really gotten that high again. In fact, they've cooled since the end of the Cold War. However, the US still holds many sanctions against Castro's long-lasting regime.

The Cold War was a time of political antagonism that existed between the US and the Communist Party, specifically the Soviet bloc countries, from about 1945 to 1990. Although the main players in this ideological standoff were the US and the Soviet Union, the region of Latin America was also involved.

In 1959, the US began a policy to keep any Communist influence out of the Western hemisphere. This led to US involvement in Latin America.

In Guatemala, the US helped a group of military rebels overthrow Jacob Arbenz, the communist Guatemalan president. Sadly, these new military rulers abused the people of Guatemala, causing an extremely devastating 36-year civil war, which lasted well into the 1990s.

In Nicaragua, the US helped Anastasio Somoza defeat Augusto Sandino, a leftist-leaning rebel. Somoza became the official leader of Nicaragua. However, Somoza also abused his people.

In response to this cruelty, leftist rebels organized, named themselves Sandinistas after Augusto Sandino, and went to war against the Somoza regime. With many, many lives lost, the Sandinistas finally gained control in 1979. They maintained control until the end of the Cold War, when US-backed rebels took it from them.

Castro's Cuban Revolution took place between 1953 and 1959. With promises of freedom, Castro was able to topple the military dictator of Cuba. However, once victorious, rather than offering independence, he allied himself with the Communist party.

With the US not wanting a communist regime so close to their land, they backed a failed attempt by US-backed rebels to overthrow Castro. This event has become famously become known as the Bay of Pigs. Raising tensions even higher was the Cuban Missile Crisis, a standoff occurring when Soviet missiles were found in Cuba and the US blockaded the island.

Since the end of the Cold War, tensions between Cuba have cooled. However, like the reign of Castro, they definitely still exist.

Overview of Asia from 1945 to the Present

Communism and the Cuban Revolution: Castro, the Bay of Pigs & the Cuban Missile Crisis

Effects of the Cold War in South Africa & Nigeria