Invertebrates are animals without a backbone that can be found in various environments from the land to the sea. Explore invertebrate evolution through the development of symmetry, specialized tissues, and unique heads housing all sensory organs. Updated: 11/20/2021
Create an account

You might have it in your head that humans rule the planet. We are everywhere, that's for sure. But even with the more than 7 billion people on Earth, we've got nothing on the invertebrates. These are animals that don't have a backbone, and they constitute a whopping 97% of the animals found on Earth! You're likely very familiar with invertebrates already. Included in this group are things like worms and insects, but also spiders, sea anemones, clams, and even squid!

As you can see, invertebrates are quite diverse and cover all sorts of environments. Some of the earliest-known animal fossils are invertebrates, but they certainly have come a long way since then. The three main things that develop as invertebrate animals evolve are symmetry, specialization, and cephalization. Let's take a closer look at each of these to understand how invertebrates have evolved over time to become the incredible world-dominating animals that they are today. 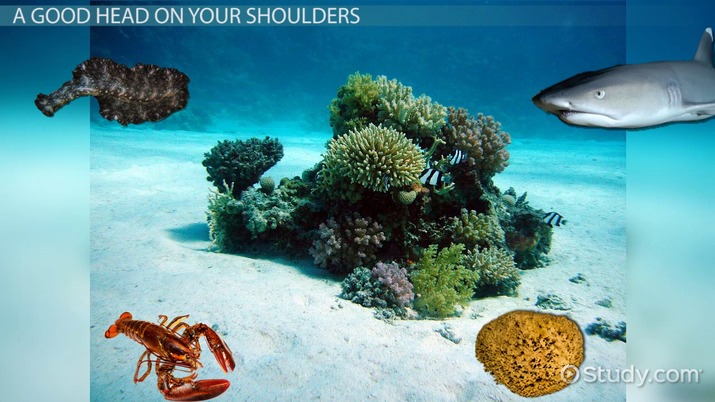 Try it now
Back
Coming up next: Invertebrates: Organ Systems & Reproduction

Simply put, if your body doesn't have a lot of specialized tissues and organs, it probably doesn't have much symmetry either. Take a look at yourself in the mirror to get a better idea of how this works. If you split yourself right down the middle you would have two halves that are mirror images of each other; in other words, you have bilateral symmetry ('bi' for 'two' and 'lateral' for 'side').

Most invertebrates have this type of symmetry, but others have radial symmetry, which is when all sides are the same. The term comes from the symmetry that 'radiates' from the center, like spokes on a wheel or slices of pizza. Things like sea stars and sea anemones have this type of symmetry. This serves these animals well because the environment around them is the same on all sides.

Some invertebrates, like sponges, do not have any symmetry at all. They are also the simplest of all animals and have no nerves, muscles, or organs. This relationship between body symmetry and body complexity makes sense if you think about it. If you have complex tissues and organs, you'll also need a blueprint of where those things belong. Imagine if your heart was in your thigh instead of your chest, or your eyes were in your feet instead of your head. What if your toes were on your ears, or just randomly scattered about your body?

These structures would be pretty useless if they were in the wrong place, so having designated areas of the body (the head, tail end, right side, and left side) allows them to go where they are best suited.

We've already touched on specialization a little, but it's so important it deserves a bit of time to itself. Basically, as animals become larger and more complex, their tissues become specialized to form distinct body parts. Nerve cells are different from muscle cells because they perform different - or specialized - functions, just like kidney cells are different from lung cells for the very same reason. You don't need to get too far into the invertebrate world to see how specialization plays a role in the lives of animals.

Because really simple animals like sponges don't have any specialized tissues, they just hang out on the bottom and exist; but right down the street we might find some flatworms that have a head, a mouth, digestion organs, and even nerve cords. Some flatworms are free-living while others are parasitic, but without these specialized tissues they'd be stuck to the bottom like their neighbor the sponge.

Even more complex invertebrates exist, things such as crustaceans and insects, and these guys not only have more complex organs and tissues than their flatworm friends, but they also have segmented bodies and structures like pincers, stingers, antennae, and eyes. They can see, feel, fly, swim, and jump, but also eat a wider variety of diets and live in many different environments.

A Good Head on your Shoulders

Quite possibly one of the most important body parts for an animal is its head. Not all invertebrates have one, but for those that do we call this phenomenon cephalization. This concentration of the brain and sensory organs in the head allows these animals to do more than their headless invertebrate buddies could ever dream of - well, if they had a head to dream with, I guess.

Most animals, even very simple ones, can sense things like light, smells, or sound. This allows them to respond to their environment appropriately. But cephalization allows animals to respond in ways that are as complex as those brains in their heads. They can flee quickly, hide, duck, swim, run, fly, change color, and so much more, all because they have those sensory organs packed together in their head.

The head is prime real estate for all of these organs, because if they're all together and close to the brain, the information gets transferred quickly, so the animal can respond quickly. Think about it: if your eyes were in your feet, it would take a lot longer for visual signals to reach your brain, and if that visual signal is one of danger you'll want that message to have the shortest path possible, right? The same is true for hearing and taste.

But you'll only notice cephalization in animals with bilateral symmetry, not asymmetric or radially symmetric animals. Remember, radially symmetric invertebrates have the same environment around them all the time, so there's no need to have specialized sensory organs located at one end or the other like their bilateral brethren.

The animal kingdom is a fascinating place, and is ruled by invertebrates, or animals without a backbone. Making up about 97% of the animals on Earth, they are a diverse and wide-spread group. Some of these animals are simple structures with no organs, special tissues, or even head and tail ends.

However, through time some have evolved to develop bilateral symmetry, or two halves that mirror each other; or radial symmetry, when all sides are the same. Symmetry and specialization tend to develop together because specialized tissues form distinct body parts. Nerves, muscles, and organs are all specialized because they perform very different functions for the body.

If you're a really special invertebrate, you might also have a good head on your shoulders with all of the sensory organs concentrated near the brain, an evolutionary development called cephalization. Having your sensory organs together allows you to respond to your environment much quicker, but only if you're also lucky enough to have bilateral symmetry.

Symmetry in Animals Types & Importance | What are Symmetrical Animals?

Aestivation Overview & Examples | What is Aestivation?