In life, there are some things that adults can do that kids cannot. Drink alcoholic beverages, for example. But likewise, there are some things that only kids can do and adults cannot, like take whole summers off and jump around in a bouncy castle. All fun aside, this is a good analogy to the way in which the American government system works. There are certain powers that only the state governments have (reserved powers), and there are certain powers that only the national government has (exclusive powers). 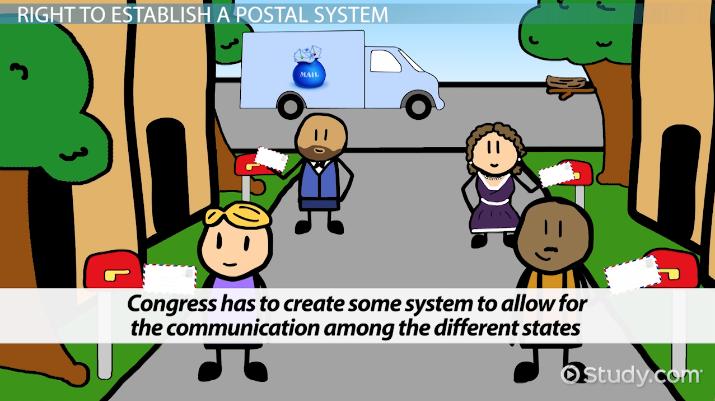 First, let's talk about levying tariffs on imports and exports.

An import is a good made in a different country and brought into our country. According to the Constitution, the federal government has the sole responsibility of taxing these goods. It makes sense for this power to be exclusive to the federal government. After all, how could we trade with other countries if the tax on Chiquita bananas from Central America was 20 cents in Florida, but 40 cents in Minnesota? Confusion would most definitely result.

So, the Framers of the Constitution did us a favor and clearly specified that this was an exclusive right of the national government. A state government, however, can charge a tax to cover the inspection of incoming goods, but that is the only thing that they can really tax.

One very important right of the national government is the right to regulate international and interstate commerce. It's very important that international commerce be controlled by the national government and not states. For one, states could undermine international foreign policy. Take the example of Cuba. When the United States had a trade embargo against Cuba, that meant that we didn't do any business with Cuba. How would we look if one of our states, Louisiana, for instance, just tried to ignore that law and traded with Cuba anyway? That would undermine the federal government.

Another responsibility is the right to regulate interstate commerce. This clause was put into the Constitution to avoid conflicts between states that might threaten the union. How would the country look if a state like California was charging more for its grapes to some states than others? The country could break out into chaos. For this reason, the Founders knew that the federal government had to control interstate commerce.

The federal government also has the exclusive power to coin money. Can you imagine going from Illinois to Missouri and having to change your money the way you do when you go to another country? The Framers of the Constitution knew that if the new country was to work, they would have to create a uniform coin system. For this reason, they gave the federal government the exclusive right to coin money.

Likewise, the army is strictly under the control of the federal government and specifically the president. States cannot build their own armies, but they can maintain their own militias, more commonly known today as national guards. The National Guard, however, is still ultimately controlled by the president, as he can call them up in times of war.

Right to Establish a Postal System

The right to establish a postal system is another of the federal government's exclusive powers.

Several people think that in this day and age of electronic mail, there is no need for an archaic postal system. What these people don't realize is that the postal service is actually mandated in the Constitution. Congress has to create some system to allow for the communication among the different states. Besides, the postal service today is entirely paid based on postage, so there is no government taxes supporting it. After all, what would Christmas be like without the annual wait in line at the post office?

You may wonder, then, if this is an exclusive power of the federal government, why are there all these different postal carriers? The answer is that companies like FedEx and UPS are private carriers, which, of course, are in no way barred by the Constitution.

The federal government also has the exclusive right to establish lower federal judicial courts. Thus, the federal judicial system is entirely separate from the state system, and each doesn't interfere with the other. The federal courts can overturn a state ruling if it somehow violates the Constitution.

These are powers that only the federal government can exercise and not the states. These powers include:

In this activity, students will conduct a review of each constitutional exclusive power and consider how that power relates to the current state of the country.

The Evolution of the Contemporary Presidential Election