This lesson covers one of the types of igneous rocks, called extrusive rocks. By the end of this lesson, you should know the definition and some ways to identify extrusive rocks yourself.
Create an account

Kilauea on the big island of Hawaii has been erupting continuously for the past 30 years. Perhaps you've seen either video or pictures of the lava oozing out of the earth and into the sea. You might have also seen images from the recent and much more explosive eruptions at volcanoes in Indonesia and Iceland. Both the lava oozing out of the earth in Hawaii and the rocks blown into the sky in Indonesia are forms of extrusive rocks.

An important reminder is that liquid rock below the surface is termed magma. When this liquid rock erupts onto the surface, it is termed lava. Both of these terms can refer to the same batch of liquid rock, but it has a different name depending on where it is located. 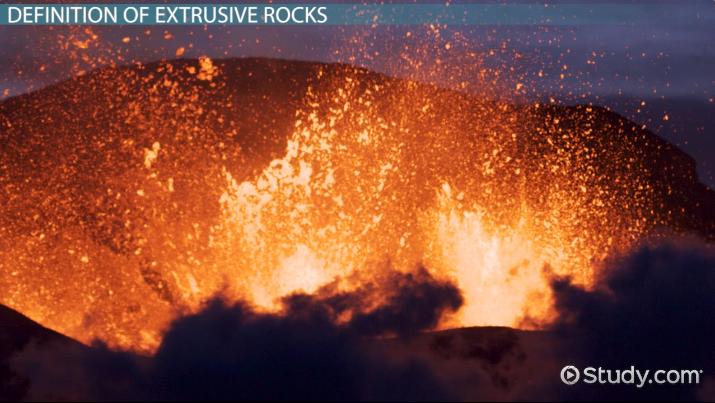 Try it now
Back
Coming up next: Fossil Evidence: Definition & Overview

How to Spot an Extrusive Rock

Even if you didn't personally see the lava crystallize yourself, there are still many clues that can help us identify an extrusive rock.

The first clue is crystal size. Crystals take time to grow. Once it erupts on the surface, lava cools down very quickly because the air is much colder than beneath the volcano. Often, the lava cools down so quickly that there is only enough time for tiny crystals to form.

Sometimes, the rock will cool so quickly that there is not enough time for any crystals to form. Obsidian is an extrusive volcanic rock that cools so quickly that it forms a glass rather than forming individual crystals.

Some extrusive igneous rocks will have bigger crystals set within a finer matrix. These rocks are called porphyritic. Don't be confused by this because these are still extrusive rocks, despite having some large crystals. In the case of these rocks, the bigger crystals actually formed deeper within the volcano, where they had enough time to grow to a larger size. However, these crystals were then carried to the surface by a liquid magma, where they erupted and the rest of the magma cooled. Because the majority of the lava cooled on the surface, these porphyritic rocks are extrusive.

Another clue to the extrusive nature of a rock can be the presence of vesicles. Vesicles are sphere-shaped cavities in extrusive rocks, which form when lava crystallizes with bubbles of gas trapped inside. Have you ever noticed that ice cubes often have small bubbles of air trapped inside? Vesicles in rocks are formed much the same way. Instead of trapping air, like bubbles in ice, the lava traps gases from the volcano during cooling. But just as not all ice has air bubbles, not all extrusive rocks have vesicles. So while you can use vesicles to determine a rock is extrusive, the absence of vesicles doesn't mean that the rock is intrusive.

Rocks containing vesicles, like this type pictured above, called scoria, are called vesicular.