F. Scott Fitzgerald (1896-1940) was an American novelist and short story writer, most famous for writing the novel 'The Great Gatsby.' Learn more about Fitzgerald's life in the Jazz Age and Modernism, his marriage, and other works including 'Tender is the Night' and 'This Side of Paradise'. Updated: 08/23/2021
Create an account

From Failure to Icon

He wrote one of the most cherished and widely read American novels in history. His most iconic novel's title character has been played by everyone, from a young Robert Redford to a not-so-young Leonardo DiCaprio. One of his short-story characters was played by a young, old and everything in between Brad Pitt. Yet, F. Scott Fitzgerald died thinking of his career as a failure. Does that seem inconceivable? Let's find out more. 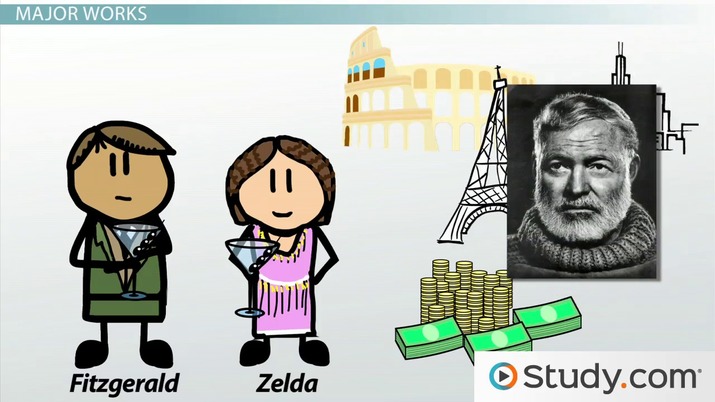 Coming up next: The Great Gatsby: Summary, Themes, Symbols, and Character

As a boy, Fitzgerald attended a few different Catholic prep schools. In these early years, he already displayed an aptitude for writing and literature. At age 13, he got his first publication: a detective story in the school newspaper. He went on to Princeton University, and he would've graduated in 1917, but he dropped out to join the army during World War I.

Thinking he'd die in combat, he quickly churned out a novel, The Romantic Egoist, but it was rejected by the publisher Charles Scribner's Sons. They did encourage him to revise and resubmit, a practice he'd pursue with vigor throughout his life.

Rather than face combat in the trenches of Europe, Fitzgerald was sent to Camp Sheridan in Alabama. While there, he met and fell for Zelda Sayre. Just 18 years old, Zelda came from a prominent, wealthy, Southern family. She was an active socialite, caring more about boys and excitement than school.

When the war ended in 1918, Fitzgerald went to New York to pursue his financial fortune in advertising. He knew he'd need wealth to marry Zelda. Early on, she agreed to his proposal, but when he didn't immediately strike it rich, she broke off the engagement.

Fortunately, he kept at his revising and turned that rejected first novel into This Side of Paradise, his first published novel. Scribner's liked it this time, and it was published in 1920. It was an overnight success. Plus, it won Zelda back! They were married a week after the book came out. A year later, they had their only child, a daughter named Frances Scott Fitzgerald (creative!), or Scottie.

This Side of Paradise is about Amory Blaine, a Princeton student from the Midwest who joined the army and unsuccessfully wooed a debutante. Sound familiar? Write what you know, I guess. The novel did signal Fitzgerald's blossoming role in the Modernist movement. Its theme of post-World War I disillusionment typifies much of the Modernist style.

While his first novel was a hit, it was short story writing that would financially carry Fitzgerald throughout his life. He received a huge audience for his many stories published in The Saturday Evening Post. It's worth noting that he considered his stories to be of inferior artistic merit relative to his novels.

An early hit story from the Post was 1920's 'Bernice Bobs Her Hair.' This one showed Fitzgerald's knack for independent female characters. This was again evident in 'The Offshore Pirate.' Later, Colliers published 'The Curious Case of Benjamin Button,' about a man who ages backwards. Brad Pitt starred in a very loose adaptation of this story.

With the fame from This Side of Paradise and the income from short stories, Fitzgerald and Zelda became, essentially, party animals. They traveled and lived in Rome, New York, Paris and the French Riviera. They hobnobbed with folks like Ernest Hemingway, with whom Fitzgerald developed a long friendship.

In 1924, the marriage with Zelda was starting to strain. She was linked to a French naval aviator, which never bodes well. Zelda heavily influenced Fitzgerald's writing. For example, many characters in his stories were based on her. Yet around this time, these portrayals took a dark turn.

This surfaced in the 1925 novel The Great Gatsby. This novel of infidelity, class and tragedy (as well as the aforementioned Robert Redford and Leonardo DiCaprio movie adaptations) has its own lesson - definitely worth checking out. Its complex structure and Jazz Age themes place it squarely in the Modernist era.

In the late 1920s, Zelda pursued a career as a professional ballerina; she had her first mental breakdown and was eventually diagnosed with schizophrenia, though she may have more accurately had bipolar disorder. She ended up living out most of her days in a series of mental hospitals, where she was subjected to horrific electroshock therapy and damaging drugs. Still, she actively wrote and painted.

Ironically, Fitzgerald had to suspend work on novels to write short stories to pay for Zelda's psychiatric care. The Great Gatsby flopped, and despite the way he criticized the social elite's reckless spending habits in his works, Fitzgerald was a terrible manager of his own finances. In fact, after Gatsby, it was Zelda who next published a novel, 1932's Save Me the Waltz. This fictional account of her marriage didn't sit well with her husband.

What may have upset him most is that the novel he'd been struggling with covered the same material. In 1934, he finally published Tender Is the Night. This is the story of Dick Diver, a psychoanalyst, and his patient/wife, Nicole. There's drinking, mental instability and infidelity - all the stuff of good fiction, as well as the stuff of Fitzgerald's own life. It was another flop, though like Gatsby, it's more highly regarded today.

Oh, I hadn't dwelled on Fitzgerald's drinking much. But it's important to note that he was a legendary drinker. All of that alcohol likely contributed to his ill health. In the late 1930s, he was sick and in debt. He spent a while in Hollywood working on scripts, but that didn't last long. He died in 1940.

At the time, he was working on The Love of the Last Tycoon. Literary critic Edmund Wilson, a good friend of Fitzgerald, finished the work based on the author's detailed notes, and it was published in 1941.

Zelda died in a fire at a mental hospital in 1948. It wasn't until around 1960 when Fitzgerald's reputation turned around and he emerged from obscurity. It took time, another World War, and acclaim from writers, like T.S. Eliot and J.D. Salinger, to help raise Fitzgerald's profile. Today, The Great Gatsby is found in nearly every high school in America.

In summary, F. Scott Fitzgerald was a novelist and short story writer closely associated with the Jazz Age and Modernism. He often wrote of socialites in the post-World War I era. His most notable novel is The Great Gatsby. Other novels include Tender Is the Night and This Side of Paradise. His wife, Zelda, was the inspiration for much in Fitzgerald's work. Their tumultuous marriage ended badly as she lived out her days in mental hospitals.

Literary Elements in The Great Gatsby

The Beautiful and the Damned by Fitzgerald: Summary & Analysis

Alliteration in the Great Gatsby

Color Symbolism in The Great Gatsby

Lies in The Great Gatsby

What is a Parenthetical Citation? - Definition & Examples

Motifs in The Great Gatsby