You are a proud parent of baby Ashley. As you are getting used to changes in life now that Ashley is home, you begin thinking about how Ashley will grow and develop from this point into a young lady. You know that growth is getting bigger in size and development is the process of advancing thinking and physical attributes.

There is a picture in your mind of what Ashley will look like and how she will think and act. You want to be sure that you give her the best chance to grow and develop into the young lady in your mind. Several factors will influence her growth and development. Some factors have already been determined, while other factors will continue to play a role throughout her developmental years. 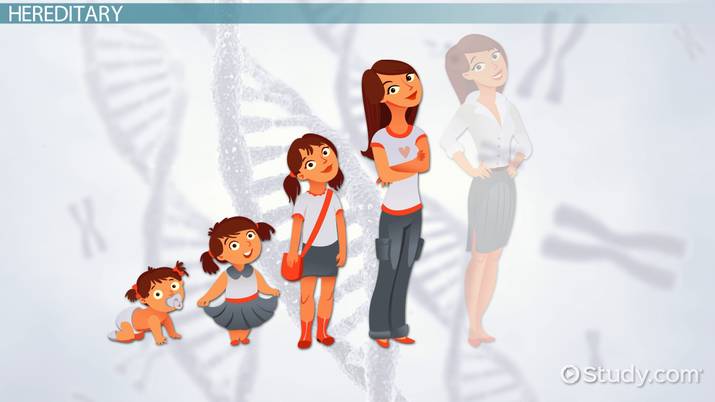 Try it now
Back
Coming up next: What Are the Organ Systems of the Human Body?

As her parents, you two give Ashley the first factor that influences her growth and development from the time she was conceived. Each of you gave genes that carry information for how Ashley should grow and develop.

Genes determine many of the physical and some of the behavioral developments that will occur throughout her life. Things such as height, weight, facial features, hip and breast size, intelligence, and eye and hair color are all heavily influenced by your genes.

Two X chromosomes determined that Ashley would be a girl. This influenced her female body characteristics from birth and will influence the development of sexual reproduction characteristics during puberty. She will also begin that development earlier in life as a girl than if she had been a boy. The other differences that would occur if Ashley were a boy are boy body structures, increased body size, and slower onset of development.

The genes you gave her also influence her race, which also influences her growth and development. Generally, different races tend to vary in size and sexual body characteristics.

You recall hearing about the age-old debate over nature vs. nurture. In other words, is growth and development determined by our genes only, or by our environment only, or by both? Over time, we have learned that the answer is, in fact, both. Everything that you put in Ashley's genes will manifest themselves depending on the environmental factors present in her life.

You probably only think about environment as being the things that are surrounding Ashley since birth. Well, her environment also includes her internal body environment and the environment inside of the uterus before her birth. Hormones affect both. They are chemical messengers that make the body start or stop doing something. The presence of certain hormones in her mom, like cortisol and insulin, played a key role in Ashley's birthweight and growth. The amount of hormones, like growth hormone, help to determine how big and fast Ashley will grow.

Other environmental factors are at play, such as pollution and chemicals. Pollution in the air and water around Ashley may cause her to develop slower than normal. You did your due diligence and made sure there was no lead or other harmful chemicals in your home. This is great because lead is especially known to interfere with early developmental processes.

Ashley is now two years old and already proving to be a kind of picky eater. You're concerned about her growth because you know that she has to eat the right amount of food types and eat a minimum amount of calories in order to grow to her full potential. You have been doing your best to ensure she does not drop below this amount because you do not want malnutrition to stunt her growth.

There is not much of a concern about Ashley being malnourished because she eats decent amounts of different types of food on a regular basis. This ensures that she has the required amount of vitamins and minerals needed to grow and develop properly. Had this not been the case, Ashley would not only be smaller than she should be, but she may develop certain conditions that could impact her overall growth. Nutrition also impacts her ability to think, remember, and analyze.

You worked very hard for years to provide a home in a nice neighborhood and supply Ashley with wholesome foods. You did this to be in a better socioeconomic status and create a lifestyle conducive to Ashley's continued growth and development. Access to a great school system will help her develop thinking and analyzing skills. Being in a safe neighborhood with other children increases the chances that Ashley will go outside to play with them. This helps her bones and muscles develop.

Ashley will hit her teen years, during which time she will begin to make decisions for herself about her lifestyle that will impact her later growth and development. Smoking cigarettes and becoming addicted to drugs may prevent further growth and development in her young adult years. This is especially true the earlier she begins these habits. Her lifestyle choices could impact her ability to develop to the point of being able to bear children of her own one day.

Here are the main things you should know from this lesson. Growth is getting bigger in size, and development is the advancement of thinking and physical characteristics.