Debra has taught at elementary levels and has an M.ed with certification in elementary education and special education

This lesson is about the South during the American Civil War. We'll take a close look at important facts about the South, and see how a strong determination to keep the nation together as one led to a horrific war. Updated: 03/02/2020
Create an account

Have you ever found yourself arguing with a sibling over what movie was better, what ride at the park was best, or what sports team is better than another? The Civil War has been described by some as brother versus brother.

The Civil War was a war between the states that began on April 12, 1861 and ended on May 9, 1865. The Union, which refers to the United States, fought against the Confederate States of America, which were the 11 southern states that seceded from the Union.

Abraham Lincoln hoped for a peaceful resolution, but believed that the United States needed to stick together and refused to accept the separation. 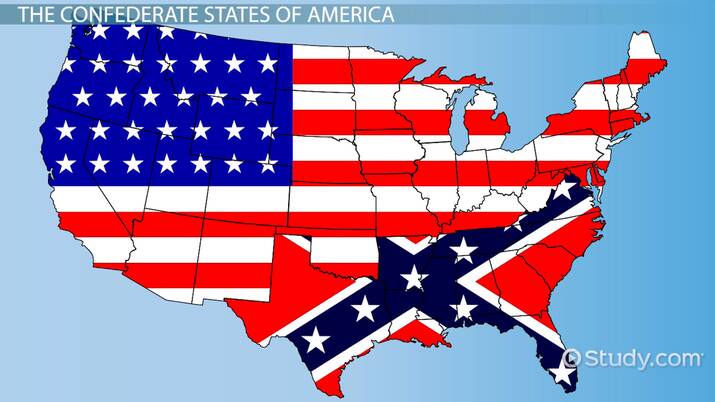 Coming up next: Union Army Lesson for Kids: Generals & Facts

The Confederate States of America

By 1861, the Confederate States of America had been formed. The Confederate states were Alabama, Florida, Georgia, Louisiana, Mississippi, South Carolina, and Texas. They were joined by Arkansas, North Carolina, Tennessee, and Virginia after the Battle of Fort Sumter, the first battle of the war. They had their own president, Jefferson Davis, and their own Confederate Flag.

Robert E. Lee served as a general for the Confederate Army from 1861 to 1865. He led 60,000 men. Forty percent of the soldiers came from southern farms. They knew the region well and were fighting to defend their home, honor, and family.

The war was horrific, with over 50 major battles over the course of four years. Many men lost their lives or were injured. By 1865, Lee was still in high command, but after losing more than half of his troops and making a final attempt to escape during the Battle of Appomattox Court House, he surrendered his entire army.

By the time the Confederates surrendered in 1865, more than 620,000 soldiers had been killed, with 1 million injured out of 2.4 million on both sides. There was also widespread devastation throughout the South.

Women in the War

Did you know many women fought in the Civil War? You may not have recognized them because more than 400 women disguised themselves as men in order to fight.

Southern women were accustomed to using slaves to do much of their work, but women took part in the war efforts, even though it wasn't considered proper to do so. Women supplied the Confederate troops with food, clothing, blankets, and sandbags. They even cared for the soldiers as nurses and took injured soldiers into their homes to care for them.

Female slaves continued to perform their own jobs on their plantations, as well as the work of their husbands, who were forced to contribute to the war effort.

Music was used to help the soldiers take their minds off of the battles that were occurring. Favorite Confederate songs were Dixie, When Johnny Comes Marching Home, and The Bonnie Blue Flag. Slaves sang spiritual songs dedicated to emancipation, or being set free.

The Confederacy relied on printed money to pay for the war. It was very confusing because each state printed their own bills. The money was used as if taking a loan, or making a promise to pay later, but the value of the money decreased to just about nothing by time the war was over.

Alright, let's take a moment to review what we've learned in this lesson.

Facts About The South During the Civil War: Lesson for Kids
Related Study Materials

The Transportation Revolution: Turnpikes to Steamboats to Railroads

Western Region of the U.S. Lesson for Kids: Facts & Climate