Kristin taught for over 10 years in the elementary classroom. She holds a B.A. in Journalism as well as a Master's Degree in Elementary Education.

Explore the use of farming in ancient Rome. Discover the crops they grew, the tools and techniques used, and which part of Roman society grew food. Finally, delve into the Roman food trade. Updated: 01/04/2022
Create an account

''Tell me, all you who have journeyed through many lands, have you seen a more richly farmed land than Italy?'' This is a quote from a Roman writer in the first century named Varro, and he was right. The area where ancient Rome was built began attracting settlers early on because its fertile land and mild climate were perfect for growing crops.

The size of the farms in ancient Rome depended on who owned them. Wealthy Romans ran large farms with many employees, while poor farmers ran smaller farms and worked the fields themselves. Most of the large farms were run by servants, and the field work was done by slaves while the owners collected profits. 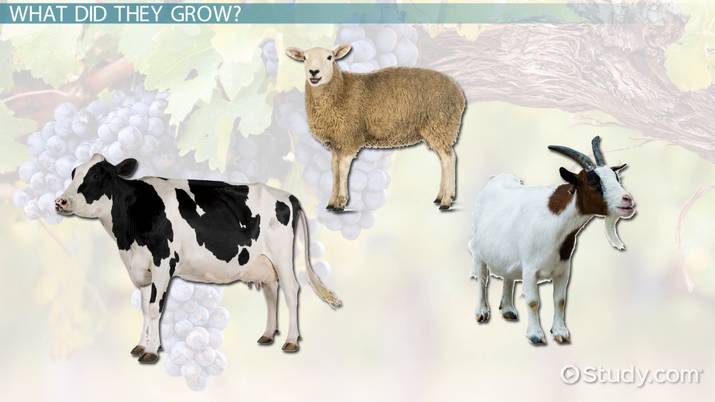 Coming up next: Ancient Roman Sculpture: Lesson for Kids

Who Were the Roman Farmers?

In ancient Roman society, everyone worked at different jobs to help meet the basic needs of all citizens more effectively. One of the most important jobs was to be a farmer because, obviously, people needed to eat! Who were these farmers of ancient Rome? Just about everyone! Over 90% of ancient Romans lived in the countryside, and the most common job there was to be a farmer. Farmers worked hard! They got up early and worked seven days a week doing chores and tending to crops. Most farmers either owned their own farmland, or worked for a larger business.

What Did They Grow?

Romans ate many types of food, but you could find three major foods on almost every Roman's table: bread, olive oil, and wine. Many different things were grown in the Roman countryside, but the most commonly grown crops reflected their diet. This included grains such as wheat, barley, and spelt, which were used for making bread, as well as grapes for wine and olives for oil. Farmers also raised cows, sheep, and goats for their milk, which could be turned into butter and cheese.

When you think of technology, you probably think of computers and robots, not things of the ancient world. However, one of the reasons why ancient Rome was such a powerful society is because they made many advancements in technology. One major advancement was the use of aqueducts, or man-made channels used to carry water. They also built mills to grind grain and water wheels to direct water to their fields.

Sometimes oxen or mules were used to pull basic plows that would turn up the soil so it was easier to plant seeds. In the beginning, grain and other crops were harvested by hand, but as farming became more sophisticated, this changed. Roman farmers also used the tribulum in their work, which was a type of wooden sled pulled across wheat fields to break down the grains. Once the grains were dried, they were stored in a granary, or a building to store food, until someone needed to use them.

So now that the food was harvested, what did the Romans do with it? Well, some of it went to feed their families and workers, and some went to pay taxes. Yes, farmers paid their taxes to the government in money and food! But the majority of the food was shipped to larger towns and cities to be sold. All in all, these farmers helped supply an empire with a basic necessity everyone needed to survive.

Let's review. Being a farmer in ancient Rome was a hard job filled with long days, back-breaking labor, and hours of chores. However, these farmers were some of the most important workers because they provided other citizens with food. They also developed many new technologies, such as the aqueduct to transport water, the tribulum to break down grains, and the granary to store food, which helped push the Romans ahead as a society. Thank you farmers!