Copyright
Lesson Transcript
Instructor: Erin Vonderach
In the world of Homer, fate always prevails. However, men, and especially gods, have some room for free will to make choices within the framework of their destinies. This lesson examines the role of fate in Homer's ''Iliad.''
Create an account

Fate vs. Free Will in the Iliad

In this lesson, we look at the role of fate, which is predestined or foreseen events out of our individual control, and its role in the Iliad, which isn't as straightforward as you might imagine. Sure, fate is powerful and lurks behind everything, giving order and a sense of direction to the events of the poem. However, a little thing called free will, or the freedom and ability to make our own choices, comes into play and complicates the particulars of preordained destiny. Let's take a look at how the gods and mortals of the Iliad demonstrate the interplay between fate and free will throughout the course of the poem. 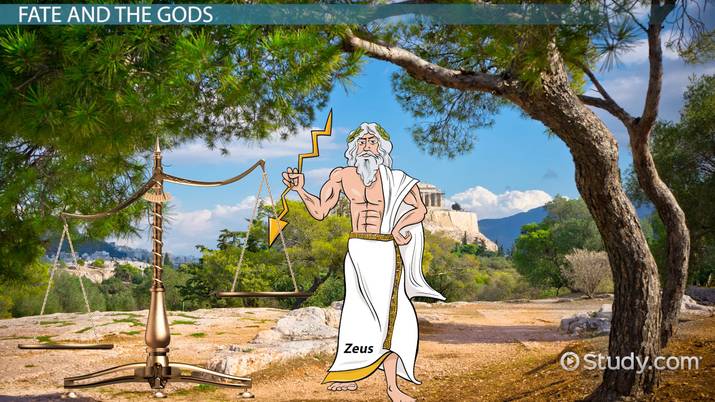 Coming up next: Athena in The Iliad

Fate and the Gods

The gods in the Iliad are very powerful and can intervene in mortals' lives, influencing relationships and success in warfare. Zeus, in particular, plays a strong role in directing the mortals. He even has a literal scale, which he tips in favor of the Trojans in Book 8. This briefly turns the tide in the war. There are also several examples of gods intervening to bestow courage and strength on the mortals involved in the war, as Poseidon does with the Aeantes brothers in Book 13.

For all their power, however, the gods are still limited by the boundaries of fate, the ultimately stronger force. While they influence day-to-day affairs, most of the gods' meddling only ends up contributing to the correct fate playing out. Zeus' scale? He may tip it in favor of the Trojans, but this is just temporary. Zeus' real reason for helping the Trojans is so the Greeks will be beaten down and Achilles will look like an even greater hero when he returns to the fighting. The Greek side is fated to win the war, and no matter what the gods do along the way, this will happen.

The gods understand that it can be dangerous to interfere with fate, and seem to respect its supremacy. In Book 16, Zeus plays with the idea of saving his son Sarpedon, who is about to meet his destiny and die on the battlefield. Zeus' wife, Hera, warns him not to mess with fate. It's a slippery slope. If Zeus saves Sarpedon, then won't the other gods start getting ideas to save their kids, too? And then where does it end? Although it grieves him to do so, Zeus allows Sarpedon to meet his death at the hands of Patroclus to avoid the chaos that would result from altering fate.

In Book 20, Zeus commands the gods to get involved in the war because without their interference, Achilles will go too far and bring down the entire city of Troy. This would be against his destiny, for Achilles is only fated to kill Hector, not to raze the entire city single-handedly. Here, the gods influence events in order to preserve the dictates of fate.

In Book 1, we're introduced to Calchas, a prophet and seer who knows the future. The mortals rely on these prophets and their understanding of fate. The mortals are always aware that they are subject to their own personal destiny. As Hector tells his wife in Book 6: 'No one escapes his fate. . . from the moment of his birth.' Like other mortals, Hector accepts his fate and goes off to meet it knowing there is nothing he can do to change it. Along the way, though, he will have free will to make choices as far as the gods will allow him.

This all seems pretty straightforward, but the concept of fate again proves tricky when we learn of Achilles' destiny; or rather, destinies. In Book 9, we hear of two clear-cut destinies. If Achilles fights at Troy, he will die in glory. If he goes back to Greece, he will have a long life but no glory. Achilles is ever-aware of these two possibilities, and he ultimately chooses to stay and fight. He knows his death is imminent once he kills Hector. Like Hector, though, Achilles also has free will regarding how and when he will fulfill his fate. His decision to stay out of the fighting as a result of his feud with Agamemnon is one instance where he exercises this free will.

Free will will only go so far, though. In Book 5, Odysseus gets on a killing spree, slaughtering several Trojans. When Odysseus is faced with the opportunity to kill Sarpedon (remember him?), Athena takes the decision out of his hands and directs him elsewhere. It is not Sarpedon's fate to be killed by Odysseus. As we've seen, that honor is reserved for Patroclus in Book 16. Odysseus has his choice of Trojans to kill until he encounters Sarpedon and the boundaries of fate kick in.

Let's review what we've learned. The concept of fate in the Iliad is a complex one, fate being predestined or foreseen events out of our individual control. Although fate is a powerful entity that holds control over gods and mortals, opportunities to exercise free will, or the freedom and ability to make our own choices, and make choices exist in the world of the poem.

The gods intervene in mortals' affairs and have the power to change relationships and advantage in warfare. However, the scope of the gods' reach is limited by ever-present fate. The gods' meddling, such as Zeus' scale favoring the Trojans in battle, mostly leads to the correct fate playing out. The gods can be tempted to alter fate, but they also know this is a risky business which could lead to chaos. Hence, Zeus listens to his wife, Hera, and allows his son Sarpedon to fulfill his destiny and die on the battlefield.

For the mortals in the Iliad, fate is even more limiting. Thanks to their belief in prophets and seers like Calchas, the mortals have a firm understanding that men are born into their fate and will fulfill it one way or another. Along the way, they do have choices in how they will ultimately come to that fate. Some men, like Achilles, even have two clear-cut destinies, a long life without honor or a short life with honor, and Achilles' path will lead him to the destiny of early death with glory.

Zeus in The Iliad

Divine Intervention in The Iliad

Gender Roles in The Iliad

Quotes About Achilles' Strength from The Iliad

Achilles' Heroism in The Iliad

What Is Helen's Role in The Iliad?

Themes in The Iliad

Achilles Quotations from The Iliad

The Death of Hector in The Iliad